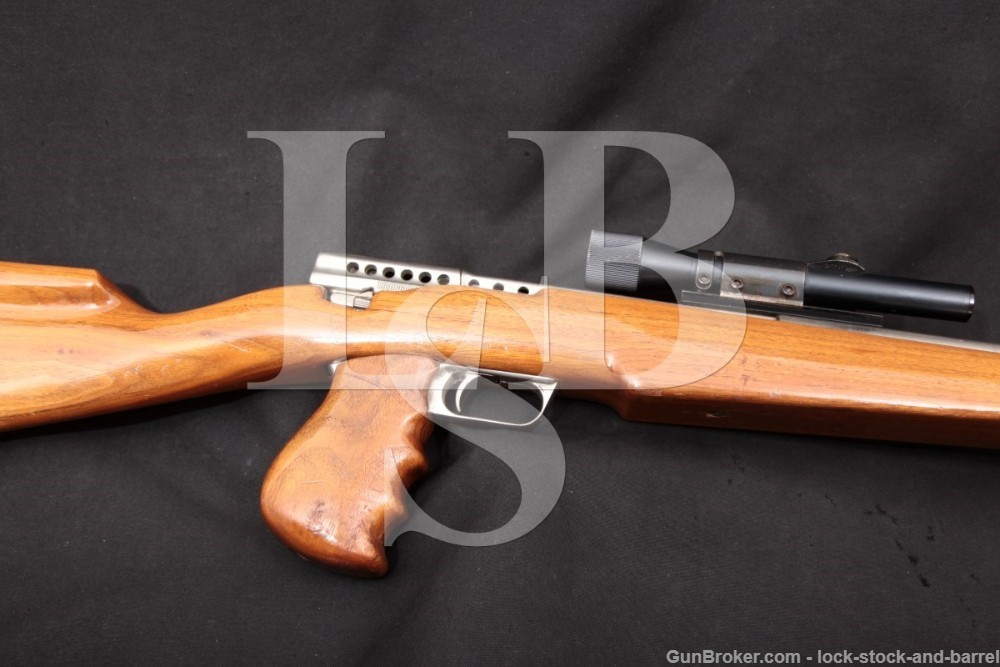 Sights / Optics: There is a rail installed on the top of the barrel with a mount holding a 1.3x scope with crosshair reticle. The scope has scattered light wear with fairly clear glass that could use a good cleaning, in about Very Good condition. There is no provision for iron sights.

Stock Configuration & Condition: The stock is two piece, straight grained, semi-gloss finished, hardwood. One piece is a pistol grip with finger grooves, actually comprised of two separate pieces glued together and secured with a screw at the bottom. The grip has scattered light nicks, scuffs and scratches and the two pieces are coming separated at the bottom-rear across the mounting screw hole. The stock portion has a raised cheek piece, beavertail forearm, cutout on the right for the slide lock lever, two cutouts on the left for the cocking lever (forward) & the safety lever (rear) and a black rubber Pachmayr White Line buttpad. The stock portion has similar wear to the grip with a crack on the right at the slide lock lever and some fouling from the exhaust ports on each side. The LOP measures 16 ¼” from the front of the trigger to the back of the buttpad. The pad has light wear. The stock rates in about Good-plus overall condition.

Bore Condition: The smooth bore is bright. There is no erosion.

Overall Condition: This rifle retains about 95% of its metal finish. There are a few scattered light nicks, scuffs and handling marks. The exhaust ports have light fouling around them. The most notable wear is on the top of the slide toward the rear. The screw head range from sharp to tool marked with strong slots. The markings are clear. Overall, this “rifle” is in about Good condition (see Mechanics).

Mechanics: The slide lock does not appear to function properly, we were not able to get the slide to lock. Otherwise, the action functions correctly. We have not fired this rifle. As with all used firearms, a thorough cleaning may be necessary to meet your maintenance standards.

Box, Paperwork& Accessories: The installed scope is included as described.

Our Assessment: This is a RARE find. The MBAssociates Gyrojet Mark I Model B Rocket Carbine was not a success with the military but it is a great futuristic looking rifle that has turned out to be quite the find for collectors. Gyrojets were tested in Vietnam and were featured in the 007 movie You Only Live Twice. The cartridge design actually hearkens back to one of the earliest self-contained cartridges, the rocket-ball. With all of the propellant contained in the cartridge, a fixed firing pin is ignited when the hammer strikes the front of the cartridge. Once ignited, the burning propellant comes out of angled ports at the rear of the cartridge, spinning the entire assembly to stabilize it as it accelerates down the bore. Unlike traditional cartridge firearms, the projectile continues to accelerate for up to 20 yards after leaving the bore, reaching its highest velocity not at the muzzle, but when the propellant is exhausted. This design was not only quieter than a traditional cartridge, the firearm could be made extremely light as it did not have to contain much pressure, and it would work under water (in theory). Most of the Gyrojet firearms were made in pistol configuration but there were also some made in a carbine configuration such as this one. This example certainly seems to have seen some use, but still remains one of the few shoulder-fired semi-automatic rocket launchers that you too can legally own! Please see our photos and good luck!