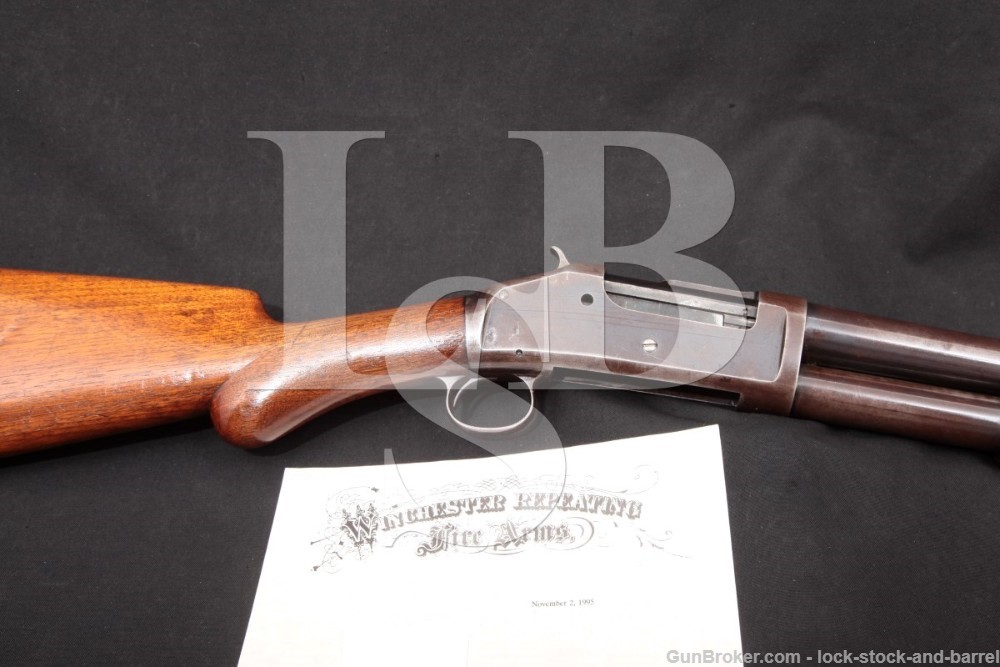 Markings: The top of the barrel is marked “MANUFACTURED BY THE WINCHESTER REPEATING ARMS CO. / NEW HAVEN, CONN. U.S.A. MODEL 1893 PAT. NOV.25.1890.”, and at the receiver with “12.”. The underside of the receiver is marked “5782”. The action slide is marked “WINCHESTER / MODEL 1893”. The left of the trigger guard under the stock, the rear face of the stock and the underside of the buttplate each have assembly number “891”.

Sights / Optics: The shotgun is mounted with a brass bead front sight.

Stock Configuration & Condition: The stocks are two-piece walnut with grooved slide handle, round-bottom pistol grip, straight comb and smooth steel buttplate. The slide handle has 14 grooves in front of the mounting screws and three behind. The stocks show light handling wear with some scattered light nicks, scuffs and scratches. Each side of the wrist has a short crack at the front edge, the right of the buttstock has a bruise below the comb in the middle, and there is a more notable scrape on the left-rear of the buttstock toward the heel. The LOP measures 12 7/8″ from the front of the trigger to the back of the buttplate. The plate is worn to white around the edges with scattered light scratches and spots of solid erosion, still retaining blue in the middle. Overall, the stocks are in about Good-Very Good condition as Antique.

Bore Condition: The bore is semi-bright. There are a few scattered patches of light erosion and infrequent minor pitting, mostly toward the muzzle.

Overall Condition: This shotgun retains about 65% of its metal finish. The finish is thinning at all edges. There is scattered honest use and handling wear with some scattered light nicks, scuffs and infrequent spots of solid erosion. The magazine tube shows operational wear, the most notable under the slide handle when the action is closed. The receiver flats have horizontal lines with discoloration from oxidation and in some areas the finish has begun to drift to a light patina. The screw heads range from sharp to tool marked with strong slots. The markings are clear, though the barrel address was stamped lightly on this model. Overall, this shotgun is in about Very Good-Fine condition as Antique.

Our Assessment: The 1893 was the shotgun that Browning wanted to design all along. He preferred the slide action to the lever action, only producing the lever action 1887 at Winchester’s behest. The 1893 is often referred to as the “wellspring” of all pump shotguns, even those manufactured today. It lead to the 1897 and eventually the Model 12, 1200, etc. It was the 3rd pump action shotgun ever produced (after the Spencer & Burgess guns), eclipsing both in design, usefulness and production. This was the first gun to make the “sound” we have all come to recognize as a shotgun being pumped. With the open-top receiver, the 1893 was designed for use with black powder shells. According to Madis, the 1893 underwent 7 “major improvements” and 21 “minor changes”. The lack of a letter prefix in the serial number indicates that this was manufactured before the major changes. While we do not know all of the design changes made, this early example has an interesting feature not seen on later guns, two small screws on the rear face of the frame inside the loading port. While we’ve seen several of these guns, this is only the 2nd we’ve seen with these two screws and the highest serial number to have this feature. Aside from the lower pressure tolerances, the 1893 could only be opened when in battery by dropping the hammer or pressing the firing pin forward with your finger. Due to this design “imperfection” and the inability of the 1893 to handle smokeless powders, Winchester offered dealers an 1897 for any equal grade 1893 that was traded into them. The 1893’s were then destroyed by Winchester, making the guns seldom seen today. Given destruction and disappearance of most 1893’s, they are uncommon guns and are especially rare in this configuration and condition.  The gun is very attractive and very honest. There is not only finish remaining on this one, but a good amount of it and the included Cody Firearms Museum letter confirms that this shotgun shipped with a 20″ barrel. This shotgun belongs in even the best of the Winchester or shotgun collections out there. Please see our pictures and good luck!