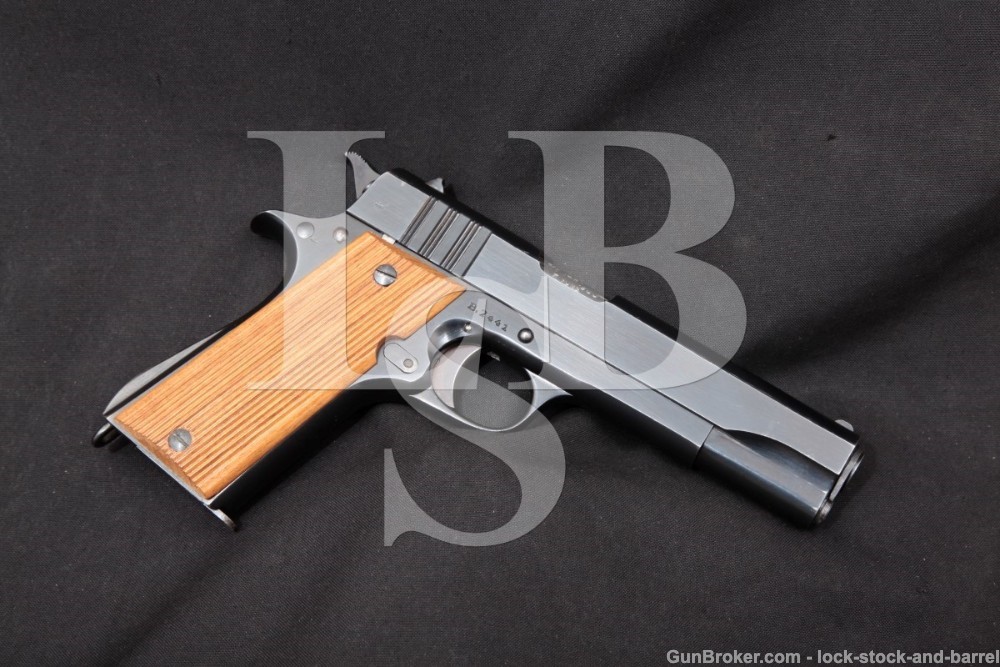 Serial Number: 21476, the British inventory number applied to this pistol is B.7441

Markings: The left side of the slide is marked “PISTOLA AUTOMATICA CAL. 45. FABRICADA POR “HAFDASA” / PATENTES INTERNACIONALES “BALLESTER-MOLINA” / INDUSTRIA ARGENTINA”. The left side of the backstrap and the flat on the underside of the slide are marked “21476”, the barrel’s right link lug is marked “476”. The right-rear of the slide and frame are each marked with a crowned “GP” British proof, the barrel at the chamber has British commercial proofs. The barrel’s left link lug and the magazine florplate each have an “HA” in diamond HAFASA logo.

Sights / Optics: The front sight is a short, rounded blade fixed to the top of the slide. The rear sight is a “U” notch dovetailed into the slide.

Stock Configuration & Condition: The grips are brown hardwood with vertical serrations. The grips have no notable wear or damage, only light handling marks. There are no chips or cracks. Overall, the grips are in about Excellent condition as possibly not original or refinished.

Bore Condition: The bore is mostly bright with sharp rifling. There is some minor erosion in the top of the bore at the muzzle, but this may prove to be stubborn fouling after a patient cleaning.

Overall Condition: This handgun retains about 93% of its current metal finish. The finish is thinning at all edges. There are some scattered light nicks, scratches and scuffs. The serrations in the backstrap show handling wear and there is a spot of wear on the trigger guard. The action shows light operational wear. The screw heads range from sharp to tool marked with strong slots. The markings are mostly clear, some of the British proofs are shallow or poorly struck. Overall, this pistol is in about Very Good-plus condition as refinished.

Mechanics: The action functions correctly. This pistol is equipped with a frame mounted safety and a half-cock hammer safety. The slide is tight to the frame. The trigger pull is crisp. We did not fire this handgun. As with all used firearms, a thorough cleaning may be necessary to meet your maintenance standards.

Box, Paperwork & Accessories: This pistol comes with a single 7 round blued magazine that shows light operational wear, intact feed lips and a strong spring, in about Very Good condition.

Our Assessment: In 1916, Argentina ordered 10,000 Colt 1911 pistols for their military, and liked them so much, they began building their own version under license from Colt, known as the Colt Systema Modello 1927. In 1929, a branch of the Spanish car maker Hipano-Suiza was started in Buenos Aires named Hispano Argentina Fabrica de Automoviles SA, or HAFDASA, by Arturo Ballester and Eugenio Molina. By the 1930s, Argentina was looking for a cheaper version of the Systema, and turned to HAFDASA. Two HAFDASA engineers, Rorice Rigaud and Carlos Ballester-Molina, designed a new pistol based on the Star Model B that would use the same barrel, magazine and recoil spring as a Colt 1911, and look and handle the same, so that no new troop training would be required. The pistol was adopted by the Argentine Army in 1938, and those pistols manufactured between 1938 and 1940 were known as the “Ballester-Rigaud”. The main differences between the HAFDASA and a Colt 1911A1 were an integral mainspring housing, and the grip safety and slide stop disassembly notch were eliminated. The pistol was an immediate success and was soon adopted by not only the Army, but the Navy, police forces, and coast guard. They were also exported to Latin American countries without their own arms making plants, such as Bolivia, Ecuador, Colombia, and Peru. In 1940 the name was changed to the Ballester-Molina, and at least 8,000 and possibly as many as 15,000 were sold to the British government for use by the Special Operations Executive (SOE) during WWII. While the Argentine company HAFDASA obviously was willing to sell arms to the British, the Argentine government was determined to remain neutral, only severing diplomatic ties with the Axis powers in 1944 and not declaring war until 1945. This is one of those Ballester-Molina’s purchased by the British with a B-prefix British inventory number applied to the frame and British proofs on the frame, slide and barrel. It is in about Very Good-plus condition as refinished. The bore is mostly bright with sharp rifling and either minor erosion or stubborn fouling in the bore. With no import marks, this pistol made it into the US sometime before 1968 and is an interesting piece of WWII history. Please see our photos and good luck!