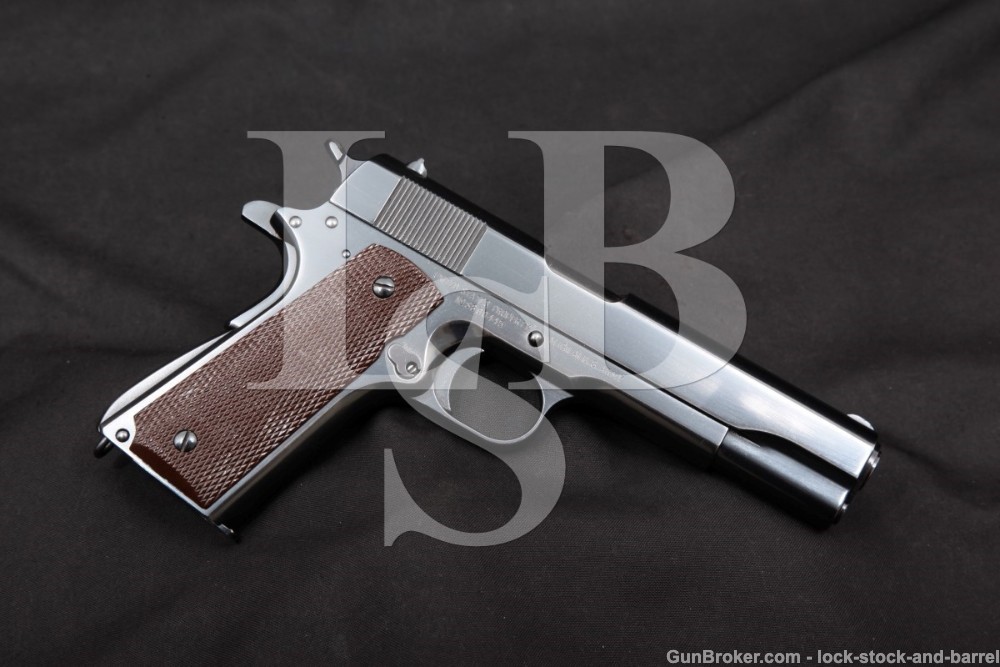 Sights / Optics: The front sight is a short blade fixed to the slide. The sight has the characteristic rectangular staking type used by Singer. The rear sight is a “U”-notch dovetailed into the slide.

Stock Configuration & Condition: The grips are checkered brown plastic with no markings, no reinforcing rings and no reinforcing ribs. The grips have a few scattered marks with some light wear on the top-rear of the left panel. The checkering is well defined. There are no chips or cracks. Overall, the grips are in about Fine condition.

Overall Condition: This pistol retains about 95% of its current metal finish. The finish is thinning at some edges. There are patches of light finish wear on each slide flat toward the front. The top-front of the slide shows minor surface erosion under the finish around the front sight. There are a few other scattered minor marks. The screw heads are sharp. The markings are clear. Overall, this pistol is in about Fine condition as refinished.

Box, Paperwork & Accessories: This pistol comes with a single 7-round magazine. The magazine shows operational wear with intact feed lips and a strong spring, in about Very Good-plus condition.

Our Assessment: The 1911 and 1911-A1 pistols served the military of the United States from 1911 to 1985, through two World Wars and the Korean and Vietnam wars. They gained a reputation as a reliable handgun with plenty of stopping power, and are held in high regard by those who have used them. This example is a particularly rare and desirable pistol made by Singer Manufacturing Co. Prior to the United States’ entry into World War II, there were a number of things done to ensure that we could enter the war as prepared as possible. One of these was a study of small arms production. While this did involve manufacturing the arms themselves, the study was more focused on the process. What was the actual production time for each part? What was the most efficient order of operations to finish a complete firearm? Singer’s study when complete had details on the total existing production capacity along with plans for what would be required to expand production to 25,000 1911-A1 pistols per month with two shifts of labor. Only after the study was complete did Singer prouce an “Educational Contract”, using the results of their study to produce 500 pistols which were delivered in December, 1941. The results of Singer’s production study and notes from their Educational Contract were to be used by later manufacturers as production was ramped up following the US entering the war. Singer did receiver a further contract for 15,000 pistols, but this was cancelled as an order for M5 Artillery Directors was deemed more important. Singer’s tooling and other material related to production of 1911 pistols was transferred to Remington Rand and would eventually end up with Ithaca. The pistols were noted for the extraordinary quality of their craftmanship. This example has been refinished, but its current finish is representative of the gorgeous DuLite blue finish it had originally. The pistol is in Fine-plus condition as refinished and its replacement barrel is bright with sharp rifling and no erosion. This will take a prized place in any 1911 collection due to its combination of history, quality and rarity. Please see our photos and good luck!