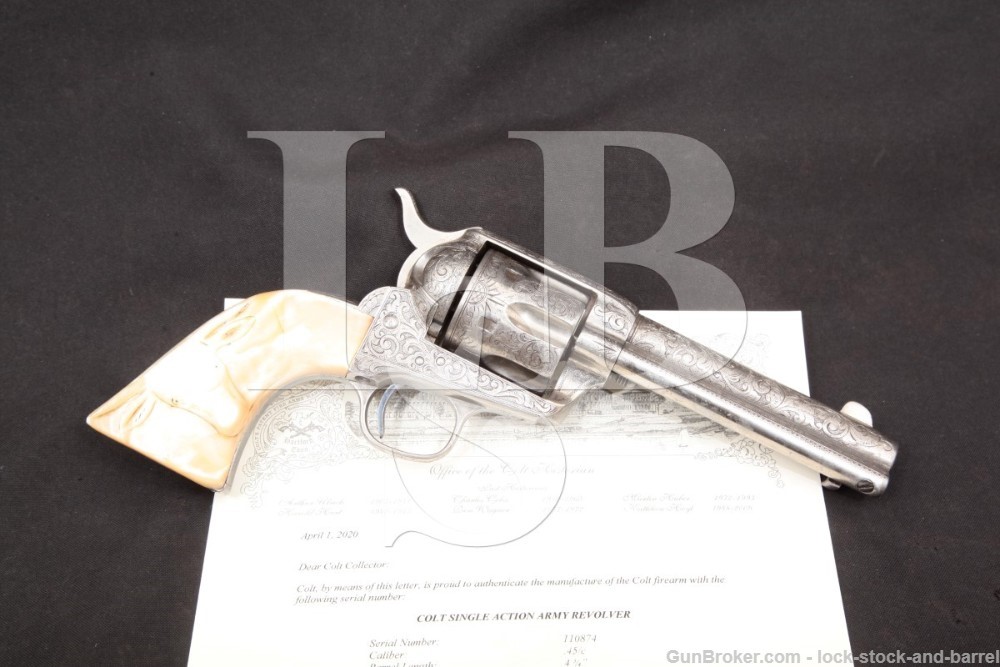 Stock Configuration & Condition: The grips are two-piece pearl with an embossed steer’s head on the left panel. The exterior of the grips show minor handling wear with some discoloration from age. The inside of the right panel appears to have lost its escutcheon and been filled with some sort of compound which has stripped out, the grip screw also appears to have been shortened for this repair. The screw does not currently securely hold the grips in place. This revolver originally shipped without grips, it is likely these were supplied by Hartley & Graham. Overall, the grips are in about Good condition as Antique and with the grip screw and escutcheon repaired or replaced would be in about Fine condition.

Type of Finish: We believe the revolver was silver plated by Hartley & Graham. Little of the finish remains and it is best identified in natural light. We found it best seen on the ejector rod housing where the plate shows the darker coloring consistent with silver.

Finish Originality: The revolver originally shipped blue & case color, the current finish we believe to be Original to the engraving (see Our Assessment).

Bore Condition: The bore is dark gray with well defined rifling. There is light erosion and pitting scattered through the bore.

Overall Condition: This revolver retains about 3% of its metal finish. Most of the silver plate has worn away, the strongest remaining finish on the ejector rod housing with some other scattered spots of remaining plate. Worn areas have likely been cleaned showing scattered pinprick erosion but with only minor discoloration from oxidation. The cylinder has turn-wear. There are some scattered nicks, scratches and scuffs. The screw heads range from sharp to tool marked with strong slots. The markings are clear. Overall, this revolver is in about Very Good condition as Antique.

Mechanics: The action functions correctly. The cylinder locks up with light play on each chamber including some end-shake. The trigger is crisp. We did not fire this handgun. As with all used firearms, a thorough cleaning may be necessary to meet your maintenance standards.

Box, Paperwork & Accessories: This revolver comes with a Colt Historian letter confirming the original configuration. This revolver was shipped August 9, 1884 to Hartley & Graham in New York, New York in a shipment of 6 guns of the same type.

Our Assessment: Colt’s Single Action Army revolver is the iconic sidearm of the cowboy, lawman, and outlaw. It was also the canvas on which some of the most beautiful American art of the 19th century was created. While Colt had their own in-house engravers, they would also ship guns to dealers who would then apply their own engraving and finishing, one of their most frequent customers for such work was Schuyler, Hartley and Graham. Schuyler would retire from the company in 1876 and the name would shorten to just Hartley and Graham by 1880. The company contracted much of their engraving work to Master Engraver Louis Nimschke, some to the Gustave Young family and the Kopec book speculates that engraving patterns indicate apprenticeship or even employment with Colt or their Master Engravers in the pieces engraved for Hartley and Graham. This revolver was shipped in 1884 where it was engraved and plated for sale by Hartley and Graham. Some of the guns shipped to the company were sent “in the soft”, with no finish or case-hardening of the receiver. This example appears to have been shipped finished and then stripped for engraving. The case-hardening of the frame likely accounts for the quality of the factory markings which we have seen more worn on guns shipped soft. The revolver has made it through the last century quite well, retaining only a little of its silver plate but with great detail in the engraving, a decent bore and strong mechanics. The engraving pattern immediately evokes the old west with its sunburst motifs and punch-dot fills. A Colt factory letter is included, which combines with the overall beauty of the revolver to make a piece that no American with an eye for fine guns could resist, much less a Colt collector. Please see our photos and good luck!