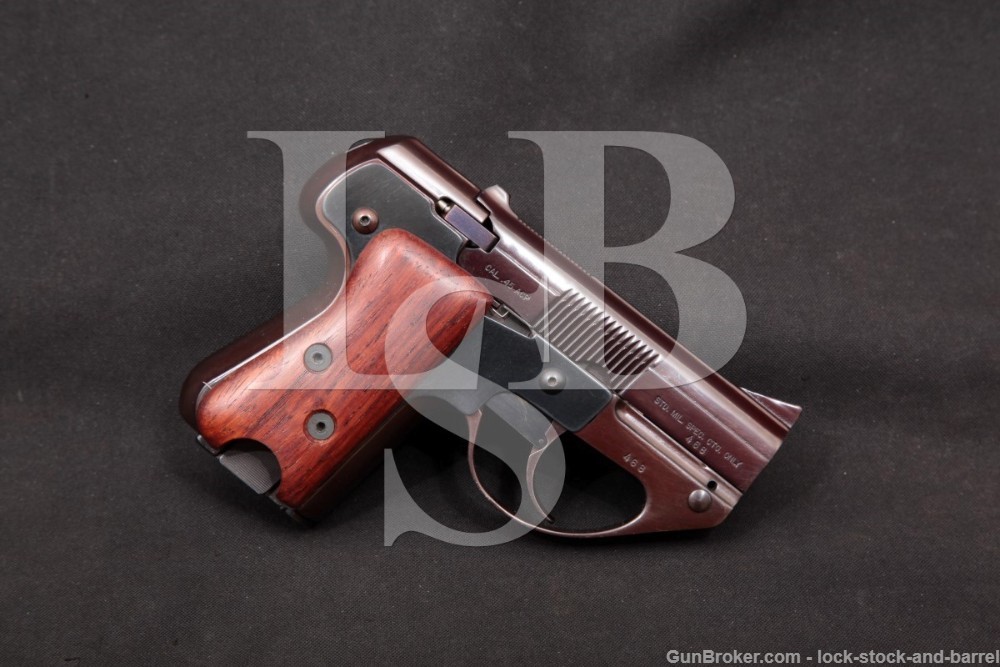 Stock Configuration & Condition: The grips are two-piece smooth cobolo panels. The grips have no notable wear or damage, only light handling marks. There are no chips or cracks. Overall, the grips are in Excellent condition.

Bore Condition: The bore is mostly bright and the rifling is sharp. There is a patch of light erosion in the bottom of the bore just in front of the chamber.

Overall Condition: This handgun retains about 95% of its metal finish. There are patches of light wear on the left of the frame below the slide serrations and at the rear above the topstrap and there is light operational wear on the slide, frame and trigger bar. Most components have developed a plum hue. The screw sockets show light tool use but are not rounded out. The markings are clear. Overall, this pistol is in about Fine condition.

Mechanics: The action functions correctly. The double action only trigger pull is smooth. The slide can be pulled forward to extract a fired case and pulled to the rear to load the next cartridge. There is a lever on the right of the frame which can lock the slide, the trigger must be depressed slightly, then the lever pressed down and held, then the trigger released to set the lock. The lock disengages automatically if the trigger is depressed. We did not fire this handgun. As with all previously owned firearms, a thorough cleaning may be necessary to meet your maintenance standards.

Box, Paperwork & Accessories: One 4-round magazine is provided as photographed, exhibiting wear marks, rating in about Fine condition.

Our Assessment: While this pistol seems quite unconventional, even weird, everything makes sense once the design principle is laid out. How do you make the most compact, concealable, most reliable, most durable,and simplest repeating .45 ACP pistol? In the late 1970s, you track down engineer and inventor Philip Lichtman and you get the Semmerling LM-4. With only 33 parts, manual operation and a locked breech, it’s about as simple and reliable as a repeater gets. At about 5 1/4″x4″x1″x1/4″, it’s about as small as you’ll get a repeating .45 ACP. Constructed from S7 tool steel and with parts examined by x-ray multiple times during production, you won’t find many tougher guns. While extensive hand-fitting, attention to detail, and a refusal to cut corners likely ended up pricing the Semmerling LM-4 out of production, it certainly succeeded in fulfilling its goals. Fewer than 600 of these pistols were produced before the name, design and tooling were sold to American Derringer and Semmerling closed their doors. It is speculated, based on the strict requirements for durability, reliability and concealability, that the pistol was developed at the behest of some shadowy government agency, but they were also offered for retail sale and are now quite the hot collector item. This example is in great condition, though the finish has developed a plum hue as many of these pistols did. This exceptionally well built and exceedingly rare pistol will make a great addition to any collection. Please see our photos and good luck!