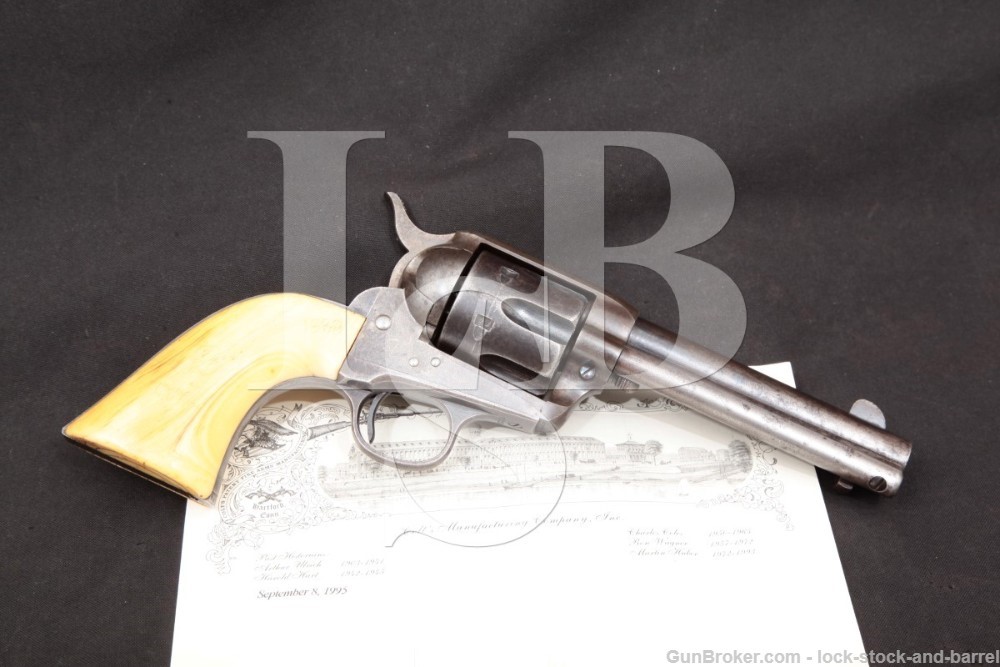 Sights / Optics: The front sight is a quarter-round blade fixed to the barrel. The rear sight is a “V”-notch at the rear of a groove in the top strap.

Stock Configuration & Condition: The grip is one-piece smooth bone with a shallow hand-carved steer’s head, diamond, and three notches on the left, the right has “1888” hand-etched. The grip has discolored slightly with age and shows light handling wear. The grip is slightly shy to the frame. There are some grain lines which are just starting to open up, but no cracks from damage. Overall, the grip is in about Very Good condition as not original to the gun.

Bore Condition: The bore is gray and the rifling is sharp where not interrupted by erosion. There is light erosion scattered through the bore with infrequent patches of more moderate erosion.

Overall Condition: This revolver retains about 15% of its metal finish. Finish remains only in protected areas such as around the front sight, in the cylinder flutes, and at corners. The remainder of the metal surfaces have mostly gone to a light patina with some areas worn to white, infrequent minor erosion and some light nicks, scuffs and scratches. The cylinder has light turn-wear. There are some tool marks on the bottom of the barrel at the cylinder pin head and the pin head is also tool marked. The screw heads range from sharp to lightly tool marked with strong slots. The markings are clear. Overall, this revolver is in about Good-plus condition.

Mechanics: The action functions correctly. Lockup produces very little play side-to-side and front-to-rear on all six chambers. The cylinder has a removable bushing. We did not fire this revolver. As with all used firearms, a thorough cleaning may be necessary to meet your maintenance standards.

Box, Paperwork & Accessories: This revolver comes with a Colt Archives letter detailing this revolver’s original shipping configuration, recipient and shipping date. The revolver originally shipped on August 21, 1902 to Turner Hardware Co. in Muskogee (Indian Territory), Oklahoma. This was one of seven of the same type in the shipment.

Our Assessment: The Colt Single Action Army is perhaps the quintessential old west handgun, produced for more than a century, serving the U.S. Army as its sidearm from 1873 into the first world war and captivating audiences on the silver screen. This example is a 1st Generation Single Action Army made in 1902, shortly after the change to the “smokeless” frame with a push-button cylinder pin release. It is chambered for the classic .45 Colt cartridge with the popular 4 3/4″ barrel length. This example was shipped to Muskogee in Indian Territory some five years before it would officially become the 46th state, Oklahoma. This was a time when the West was still being won, making this a wonderful part of history. Whether you’re an collector of Colts or Old West firearms, this will make a great piece for the lucky winner. Please see our photos and good luck!