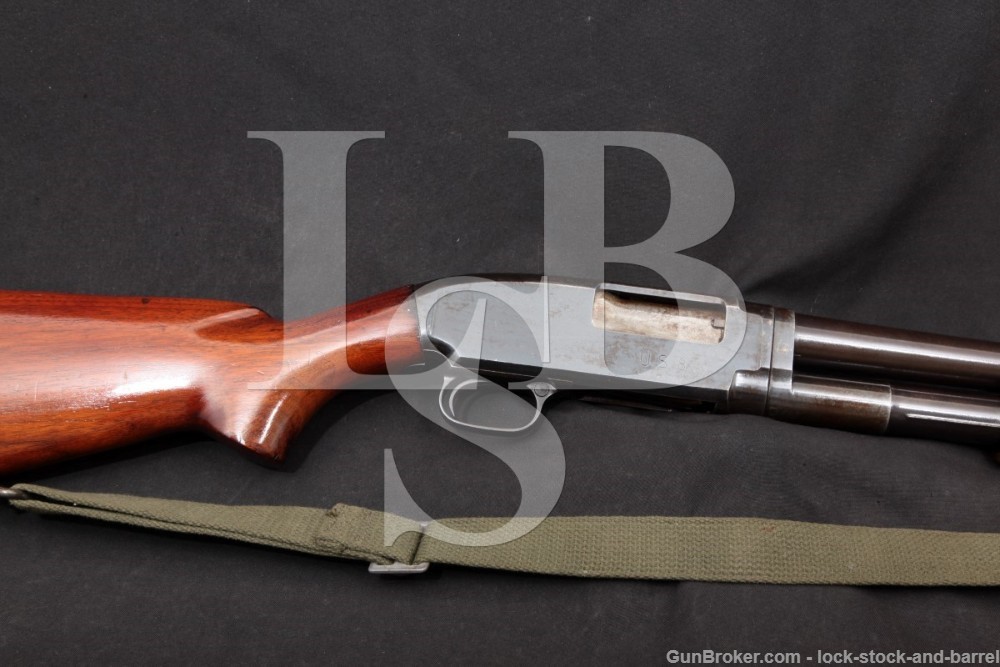 Markings: The left of the barrel is marked “MADE IN NEW HAVEN, CONN. U.S. OF AMERICA / -WINCHESTER PROOF STEEL-“, “-WINCHESTER- / -TRADE MARK-“, “MODEL 12 – 12 GA. – 2 3/4 CHAM. / CYL”, the top-rear is marked with a flaming bomb Ordnance mark and ovalled “WP” Winchester proof, the bottom rear is marked “43”. The top-front of the receiver also has an ovalled “WP”, the right of the receiver is marked “U. S.” with a flaming bomb under the ejection port, the bottom-front is marked with the serial number. The serial number is also marked on the bottom of the barrel extension. The left of the stock has a “G.H.D.” in box cartouche over an Ordnance crossed cannons mark.

Stock Configuration & Condition: The stocks are two-piece walnut with a forend which has 18 grooves, non-fluted high comb, semi-pistol grip, checkered black hard rubber Winchester Repeating Arms Co. buttplate and sling swivels mounted to a plate in the belly and to the bayonet lug. The sling plate in the belly has the dimensions of WWII issue trench guns. The stocks have scattered nicks, dings, scuffs and scratches, the most notable in the buttstock. There are cracks in the wrist on the left and bottom. There is some dark discoloration at the front edge of the wrist and the front of the comb. The right of the buttstock at the rear has two bands of odd finish wear in a pattern similar to canvas texture. The LOP measures 13 7/8″ from the front of the trigger to the back of the buttplate. The plate has scattered minor wear with a chip loss at the heel which extends to the mounting screw. Overall, the stocks are in about Good-Very Good condition.

Finish Originality: Most blued finish is original, there are some spots that appear to have been touched up.

Overall Condition: This shotgun retains about 70% of its metal finish. The finish is thinning at all edges. Most of the balance of finish is in scattered light surface oxidation, some of which appears to have been scrubbed out and touched-up with cold blue. The magazine tube, action bar and bolt show operational wear. There are some scattered nicks, scuffs and scratches. The screw heads range from sharp to tool marked with strong slots. The markings are clear, though the barrel’s flaming bomb and the receiver’s “WP” proof both appear double-stamped. Overall, this shotgun is in about Very Good condition.

Mechanics: The action functions correctly. We have not fired this shotgun. As with all used firearms, a through cleaning may be necessary to meet your maintenance standards.

Box, Paperwork & Accessories: This shotgun comes with the installed bayonet lug/heat shield as described and photographed. The bayonet lug/heat shield is steel and has four rows of nineteen cooling holes with proper dimensions and features for a WWII trench gun part. The magazine tube has a mounting post on its front face which fits into the rear of the bayonet lug assembly, the barrel is NOT cut for a magazine band. A green canvas sling is included showing light wear.

Our Assessment: The Winchester Model 12 is one of the most successful shotguns ever produced with more than two million made in its production history. In addition to seeing use by hunters and clay shooters for generations, the Model 12 has served in both world wars, the Vietnam War and in countless law enforcement agencies across the country. This example appears to be a genuine trench gun with bayonet lug/heat shield which will accept the M1917 bayonet. It is in the proper serial range, has proper markings, the barrel is not cut for a standard magazine bracket or for a bead, its tube doesn’t have wear from a standard bracket, and the left-front edge of the receiver is missing the spot of wear which is very common on commercial model 12 shotguns caused by the action bar during reassembly. The wear in the stocks and metal indicate some time spent in the field, but the bore is still bright and the mechanics are still strong. This is a nice old Winchester which will make a great addition to any collection. Please see our photos and good luck!