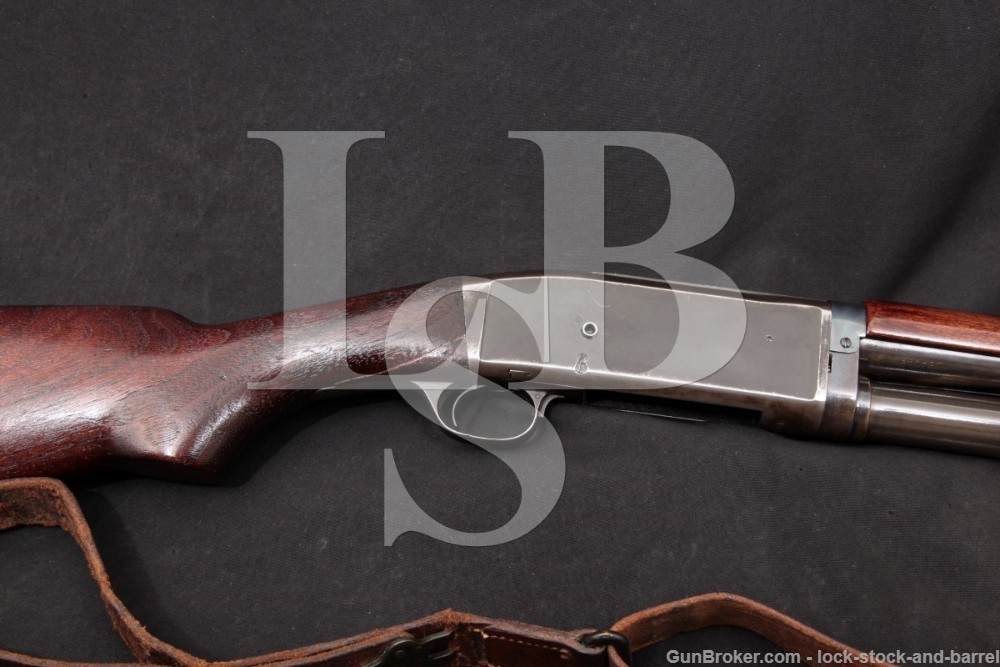 Markings: The top of the barrel is marked “MODEL 10”, “THE REMINGTON ARMS UNION METALLIC CTG. CO. INC. / REMINGTON ARMS WORKS, ILION, NEW YORK, U.S.A. / PATENTED FEBRUARY 3. 1903. AND MAY 16. 1905.”, the left is marked “FULL” with an inspection mark, the right has “REP” in oval, and the bottom-right has had “164046” stamped in place of its original serial marking.  The left of the receiver has a flaming bomb over “U. S.” (with serifs). The bottom of the receiver is marked “U / 164046”. The bottom tang is marked “REMINGTON / UMC” in circle. The action bar is marked “TRADE Remington MARK”. The front face of the bayonet mounting stud has an eagle’s head mark.

Stock Configuration & Condition: The stocks are three-piece walnut with a forend which has 16 grooves, wood handguard retained with metal clips at the front and rear, semi-pistol grip, straight comb, checkered black hard rubber Remington UMC buttplate and a sling plate mounted in the belly (the other is mounted to the bottom of the magazine tube). The stocks have some scattered nicks, dings, scuffs and scratches, most notable on the left of the buttstock. The slide handle has two cracks at the left-rear. The wrist has a couple of cracks at the front edge with repaired chip losses to each side of the trigger guard, each appearing to have been repaired with the original pieces. The LOP measures 13 5/8″ from the front of the trigger to the back of the buttplate. The plate has scattered light wear with a pair of small losses at the right of the toe. Overall, the stocks are in about Good-plus condition as refinished and repaired.

Bore Condition: The bore is semi-bright with scattered minor erosion. There is a shallow dent visible at the location of the bayonet mount’s tensioning screw on the bottom.

Overall Condition: This shotgun retains about 65% of its current metal finish. The finish is thinning at all edges. There is scattered light finish wear, some minor surface oxidation, and several scattered light nicks, scuffs and scratches. There is fairly evenly spread minor surface erosion under the finish on the receiver with a few other spots of minor erosion under the finish of the barrel and magazine tube. The rear mounting screw for the front sling plate is missing. The screw heads range from sharp to lightly disfigured with a useable slot. Most markings are clear, the barrel’s original serial marking has been almost completely removed and a new matching serial number applied. The flaming bomb and “U.S.” markings on the receiver are shallow and incomplete. Overall, this shotgun is in about Fair-Good condition as refinished (see Mechanics).

Mechanics: The bolt does not travel all the way to the rear when the action is cycled. Otherwise, the action functions correctly. We have not fired this shotgun. As with all used firearms, a through cleaning may be necessary to meet your maintenance standards.

Box, Paperwork & Accessories: This shotgun comes with the installed bayonet lug and a brown leather military-style sling. The sling has a worn marking which appears to be “G. & K. / 1918 / H.B.”, showing scattered light-moderate wear and discoloration on its metal hooks.

Our Assessment: The shotgun has a long history in the United States military. While shotguns have historically been used for foraging or guard duty, the combat shotgun may not be unique to America, but it’s not a stretch to say that American use is unique. From the Battle of New Orleans to the Civil War, from the trenches of WWI to the jungles of Vietnam, the combat shotgun has continued to find use by the American military. At the outset of the Great War, the United States wanted shotguns for use defending and assaulting the trenches which defined the first World War. Remington responded with a trench version of their Model 10 pump-action shotgun. Readily identified in photos from the conflict, Remington had to work around patents for the combination heat-shield/bayonet-lug seen on other trench guns, having a separate lug and a wooden handguard held in place by two metal clips. This shotgun appears to have been made with an original Ordnance marked receiver, but the barrel is a commercial example which has been cut and force-matched. The conversion is well done with proper barrel length, bayonet lug and sling mountings. The action will need a little work as the bolt currently will not travel all the way to the rear. Whether you want to get this one working again or are just looking to add to a display of US combat shotguns, this Remington 10 will make a nice addition to any collection. Please see our photos and good luck!