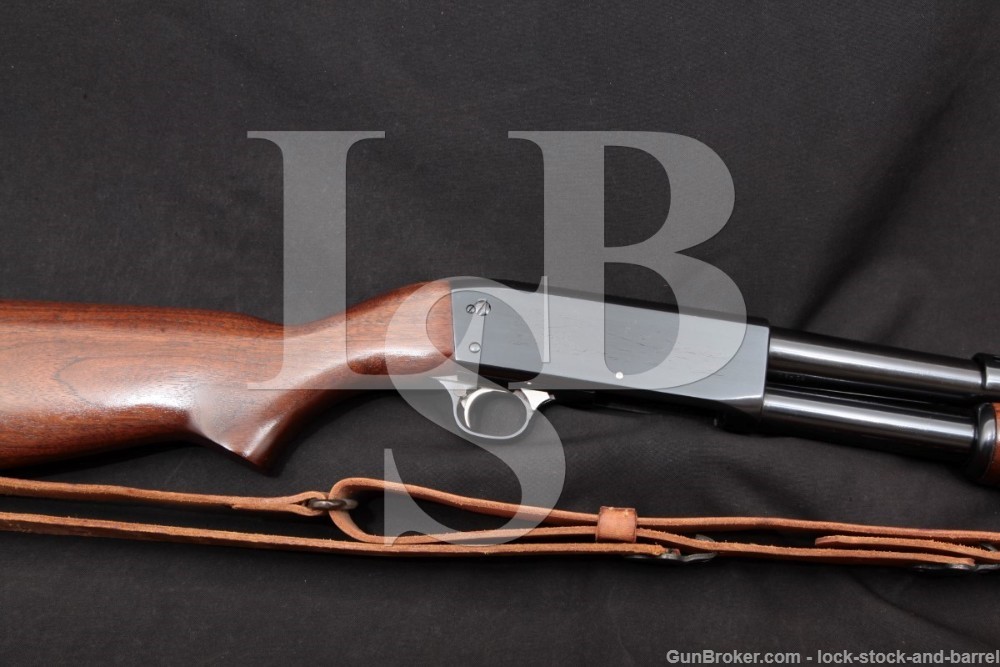 Sights / Optics: There is a bead mounted to the front of the bayonet lug. The barrel is NOT drilled for a bead underneath.

Stock Configuration & Condition: The stocks are a two piece walnut set with grooved forend, pistol grip, straight comb, serrated black plastic Ithaca buttplate and sling plate inlet to the belly. The stocks have minor handling wear with a few scattered light marks, the most notable on the top-right edge of the slide handle, lining up with the rear corner of the heat shield when the slide is retracted, as from an attempt to remove the barrel with the heat shield still installed. There are no chips or cracks. The wrist thins notably behind the receiver and is shy to the receiver at the front edge. The LOP measures 13 7/8″ from the front of the trigger to the back of the buttplate. The plate has scattered light wear. Overall, the stocks are in about Fine-Excellent condition as refinished and not original to the gun.

Overall Condition: This shotgun retains about 95% of its current metal finish. Most of the balance is in operational wear on the magazine tube and action bar. There are a few other scattered minor marks and the receiver flats have very faint spots of surface oxidation. The screw heads range from sharp to tool marked with strong slots. Most markings are clear, some of the receiver markings are shallow or incomplete. Overall, this shotgun is in about Fine condition as refinished.

Mechanics: The action functions correctly. The shotgun ejects out the bottom of the receiver. It can be slam-fired. We have not fired this shotgun. As with all used firearms, a thorough cleaning may be necessary to meet your maintenance standards.

Our Assessment: The Ithaca 37 enjoys a good reputation for its durability, ambidextrous ejection design, smooth action and of course for being one of few pump shotguns which can be “slam-fired”, meaning that with the trigger depressed, pushing the slide handle forward and locking the action will allow the chambered round to be fired without needing to reset the trigger. In addition to seeing use by bird and deer hunters for generations, the Model 37 has served in WWII, the Vietnam War and in countless law enforcement agencies across the country. This example is in the Trench-Gun style, with a 6-row ventilated handguard/bayonet lug installed. The assembly is proper for an Ithaca Trench-Gun with the exception of the smooth buttstock which would have been a commercial checkered stock. Additionally, the serial number is a little early for an Ithaca trench gun, however it is in the proper serial range for some of the earliest 30″ field guns sold to Springfield Armory. It is possible that its Ordnance markings are correct, and this gun was converted from an aerial trainer/recreation gun purchased by Springfield Armory. In any case, it has been beautifully restored and configured with a proper heat-shield which will accept a 1917 bayonet. A gun like this with a two-foot bayonet sticking off the end would probably put second thoughts in enemy soldiers! The gun is in Fine condition as refinished with the great majority of its blue finish remaining, a bright bore, and great mechanics. This would be a great gun for an Ithaca collector or a military shotgun collector as a placeholder for an issued Trench-Gun. If the collectors don’t snap it up, it will still serve as a great defensive shotgun and host for an M1917 bayonet. Please see our photos and good luck!