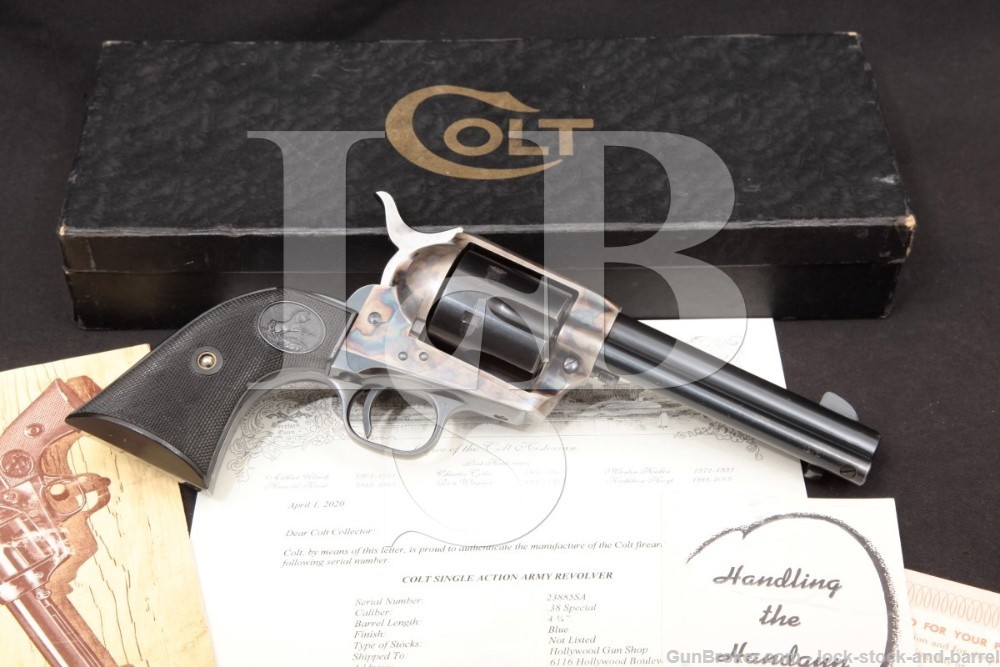 Stock Configuration & Condition: The grips are two-piece checkered black hard rubber with rampant colt in oval at their tops. The grips have no notable wear or damage, only light handling marks. There are no chips or cracks. The checkering is sharp. The grips are slightly proud to the backstrap but otherwise well fit. Overall, the grips are in about Excellent condition as not original to the gun.

Overall Condition: This revolver retains about 97% of its metal finish. The finish is lightly thinning at some edges, most notable at the top-right of the trigger guard. There is handling wear inside the trigger guard on the top in front of the trigger. The ejector rod housing has a light scuff toward the front. The cylinder has a thin, faint turn-line. The unfinished side faces of the hammer show minor discoloration from oxidation and light operational wear. There are a few other scattered minor marks. The case color is strong. The screw heads are sharp. The markings are clear. Overall, this revolver is in about Fine-plus condition.

Box, Paperwork & Accessories: This revolver comes in a black cardboard Colt box with model matching label, an assortment of factory paperwork including manual, and a Colt Archives letter detailing this revolver’s original shipping configuration, recipient and shipping date. The box has a faint hand-marked serial on the bottom, we can’t really make out the marking but it does not appear to match the revolver’s serial number. The box has light storage wear with wear at edges and corners, in about Very Good condition. The revolver originally shipped on January 23, 1959 to Hollywood Gun Shop in Hollywood, CA. This was the only gun of the same type in the shipment.

Our Assessment: The Colt Single Action Army is perhaps the quintessential old west handgun, produced for more than a century, serving the U.S. Army as its sidearm from 1873 into the first world war and captivating audiences on the silver screen. The SAA was discontinued by Colt as it tooled up to provide for the WWII war effort, and it was thought by Colt that the design was obsolete, swing-out cylinder revolvers had been around for half a century and autoloaders were gaining in popularity. Then, with the advent of television and western programs such as Hopalong Cassidy, The Lone Ranger, The Cisco Kid, and The Gene Autry Show, American interest in the guns that won the west was reborn. In 1956, Colt reintroduced the Single Action Army, this new production run now referred to as the 2nd Generation SAA’s, and this is one such example from 1959. Fitting for the silver screen’s role in reviving the SAA, this revolver was shipped to Hollywood Gun Shop in California. It is in Fine-plus condition with a great bore, strong mechanics and wear consistent with handling and little if any use over the past 60+ years. The gun is chambered for the common .38 Special cartridge, so if you choose to shoot it, ammunition should be easy to find in a variety of loads. It comes with a Colt Archives letter detailing the original configuration and shipping date which is a nice addition for collectors. This would make a great addition to a Colt collection as an early second generation. Please see our photos and good luck!