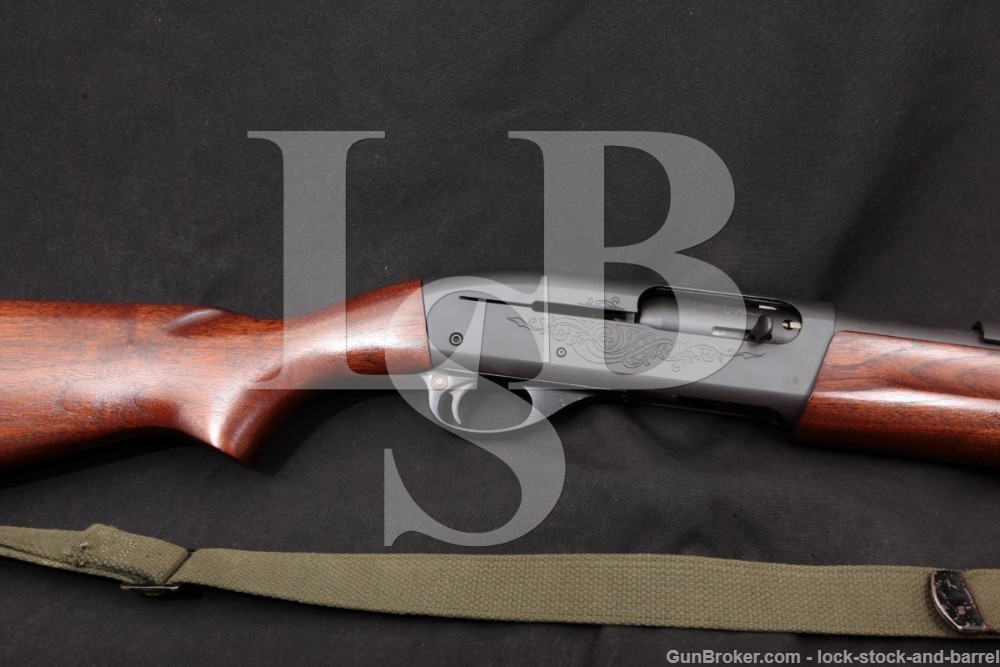 Year of Manufacture: 1963, First Year of Production (confirmed with Remington)

Stock Configuration & Condition: The stocks are a two piece smooth wood with finger-grooved semi-beavertail forend, pistol grip, straight comb, solid black rubber Remington buttpad, and a sling swuivel mounted in the belly (the other swivel is mounted to the rear of the bayonet lug). The stocks have minor handlign wear with only a few scattered minor marks. Only on close inspection can you see that the forend was previously checkered, there is no evidence of previous checkering in the grip. The LOP measures 13 7/8″ from the front of the trigger to the back of the pad. The pad shows minor wear. Overall, the stocks are in about Fine-Excellent condition as refinished.

Overall Condition: This shotgun retains about 97% of its current metal finish. There are a few scattered light scuffs and scratches, the most notable on the top of the heat shield forward of the forend. There is faint operational wear. The pin heads are unmarred. The screw heads range from sharp to lightly tool marked with strong slots. The markings are mostly clear, the serial marking is a little shallow. Overall, this shotgun is in about Fine-Excellent condition as refinishd.

Our Assessment: The shotgun has a long history in the United States military. While shotguns have historically been used for foraging or guard duty, the combat shotgun may not be unique to America, but it’s not a stretch to say that American use is unique. From the Battle of New Orleans to the Civil War, from the trenches of WWI to the jungles of Vietnam, the combat shotgun has continued to find use by the American military. This Remington 1100 has been modified to resemble the Model 7188, a fully automatic version of the 1100 which was developed for use by SEAL teams in Vietnam. While this one doesn’t have a selector switch, it does have the heat shield/bayonet lug combination which accepts M7 bayonets, a parkerized finish, and has had U.S. military-style markings applied to the gun and stock. Given the scarcity and extreme cost of an original 7188, this 1100 will make a great alternative and will display well in a collection of Vietnam-era small arms. It should also make for a great home defense shotgun as well. Please see our photos and good luck!