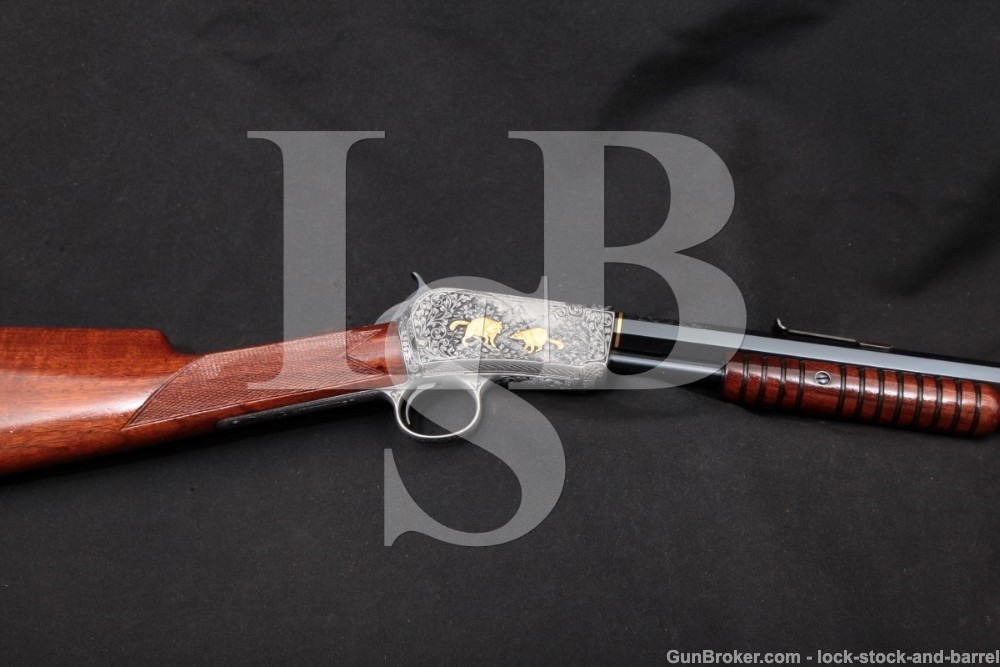 Sights / Optics: The front sight is a folding Beech-style sight with a white beaded blade and a post in ring. The rear sight is a “V”-notch screwed to the rear of the barrel, adjustable for elevation. The top tang is drilled, tapped and filled for a peep sight (none included).

Stock Configuration & Condition: The stocks are two-piece walnut with a grooved forend, checkered straight grip, straight comb and french-gray crescent buttplate. The stocks have only a few scattered light nicks and handling marks. The checkering is sharp. There are no chips or cracks. The LOP measures 12 3/4″ from the front of the trigger to the back of the buttplate. The plate has no notable wear or damage. Overall, the stocks are in about Fine-Excellent condition as refinished and/or not original to the gun.

Bore Condition: The bore is bright and the rifling is sharp.

Overall Condition: This rifle retains about 97% of its metal finish. The action bar has light operational wear. The rear sight has thinning at edges and scattered minor surface oxidation. The barrel has a few scattered spots of minor surface oxidation under the finish with a nick on the left flat under the finish about 4″ from the end of the magazine tube. The screw heads range from sharp to lightly tool marked with strong slots. The markings are clear. Overall, this rifle is in about Fine-Excellent condition.

Mechanics: The action functions correctly. The action locks-up correctly. The hammer has a half-cock safety position. We have not fired this rifle. As with all used firearms, a thorough cleaning may be necessary to meet your maintenance standards.

Our Assessment: The Winchester Model 1890 pump action rifle was designed by John Browning in the late 1880’s and patented in 1888. Winchester had asked him to design the rifle as a replacement for the rimfire versions of the Model 1873, which had never achieved great popularity. It proved to be the most successful repeating rim fire rifle for general all-around shooting ever made by Winchester. Approximately 849,000 Model 1890 rifles were produced between 1890 and 1932, after which the Model 1890 was replaced by the Model 62. The rifle was produced in .22 Short, Long, Long Rifle and .22 WRF, but the calibers were not interchangeable. For many years, the Model 1890 chambered for .22 Short was considered to be the standard for use in shooting galleries, hence its nickname of “Gallery Gun”. This Model 90 takedown rifle was made in 1912 with a 24” octagonal barrel chambered for the ubiquitous .22 L.R. cartridge. Years later, according to the consigner, Belgian master engraver Jean Schultz was commissioned to engrave the rifle, and the results are gorgeous. The relief engraving is so deep it might be better described as carving with beautiful detail in the backgrounds of the game scenes and in the molded gold animals. Per the consigner, Schultz would not sign work that was exported from Belgium at the time as it would endanger his state pension if it was discovered that he was still working. This is not only a beautiful rifle, it’s a thumbed nose at European socialism. What could be better than that? Please see our photos and good luck!