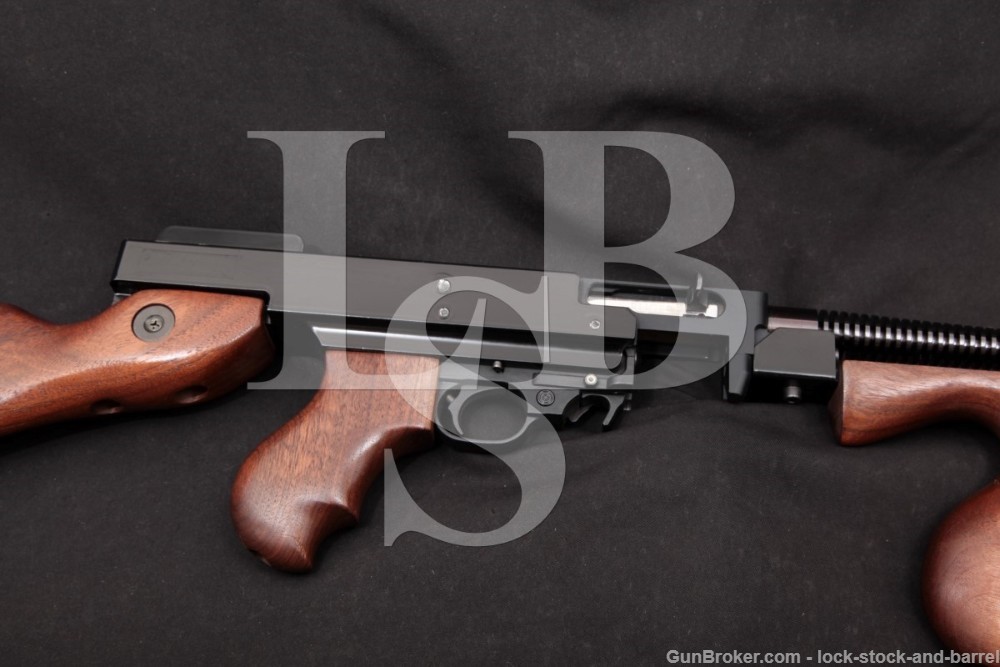 Model: This is a BRN-22 receiver (Aftermarket Ruger 10/22 Pattern Stripped Receiver). It has been built into a Tommy Gun style rifle with a Scottwerx kit.

Barrel Length: 16 ½” Finned. The barrel is threaded but is not installed with any sort of muzzle device.

Sights / Optics: There is no front sight present. The rear sight is a fixed aperture peep sight that is integral to a base with protective ears screwed to the chassis. The top of the receiver has two pairs of drilled, tapped, and filled holes.

Stock Configuration & Condition: The stocks are a three-piece smooth oil-finished walnut. There are some scrapes and light compression marks on the wood. The highest concentration of scrapes is located on the left side of the foregrip. There are a few scrapes on the sides of the pistol grip on the very bottom, butt, and also behind the trigger. The most noticeable defect on the stock set is an impact mark through the finish on the right side of the butt. There are no chips or cracks. This is some nice wood, just look at the grain of the stock. The LOP measures approximately 14 5/8” from the front of the serrated trigger to the back of the smooth black hard rubber buttplate. The buttplate has some light rubs and a scuff or two. The stocks rate in about Fine overall condition.

Finish Originality: The receiver and barrel are original, due to the depth of the markings on the chassis we believe a previous owner may have applied a new coat of black paint to the chassis.

Overall Condition: This rifle retains about 97% of its metal finish. The chassis has a thin scratch on the left side above the pistol grip. The chassis has a few tiny nicks, rubs, and scuffs. The most noticeable scuffs are on the right side of the chassis at the rear. The receiver has a few rubs, tiny nicks, and a few very light scrapes. The receiver and chassis both have light finish loss on some of their edges. The barrel is drifting to plum. The barrel has a little nick through the finish on the bottom at the front. The screw heads are undamaged. The markings are clear with the exception of the markings on the chassis. Overall, this rifle rates in about Fine Plus condition.

Box, Paperwork & Accessories: None. Please note, no magazine is included.

Our Assessment: The Ruger 10/22 platform is one of the most rugged, versatile, reliable, and well liked rifles ever produced, with unending options for customization and legendary out of the box accuracy. It is no surprise an ocean of manufacturers produce aftermarket components for such a well-liked rifle. This is a Brownells 10/22 pattern receiver with a Scottwerx Tommy Gun kit installed. Most of us are familiar with the Tommy Gun, but few would ever associate it with the 10/22 platform. The Thompson was developed during World War I when John T. Thompson realized the need for a close-quarters weapon for trench warfare rather than the cumbersome rifles the soldiers were issued. However, the prototype was completed, but by then WWI was already over. The army and marine corps evaluated the gun and thought favorably of it, but did not make any large orders. While the military had purchased only small numbers, the gun was widely used by gangsters and was one of their weapons of choice. It was used in many bloody incidents including the St. Valentines Day Massacre. This is a cool little take on one of the most well-known firearms of all time and sure would be fun to shoot. This one has a bright bore with sharp rifling and looks like it was hardly ever used. With the almost unending amount of parts there you can continue adding modifications if you like, but even better, scarcity of parts likely won’t be an issue. If you want to train a young shooter how to nail some cans, this street sweeper would not only look cool but deliver lead as aimed. Please see our pictures and good luck!