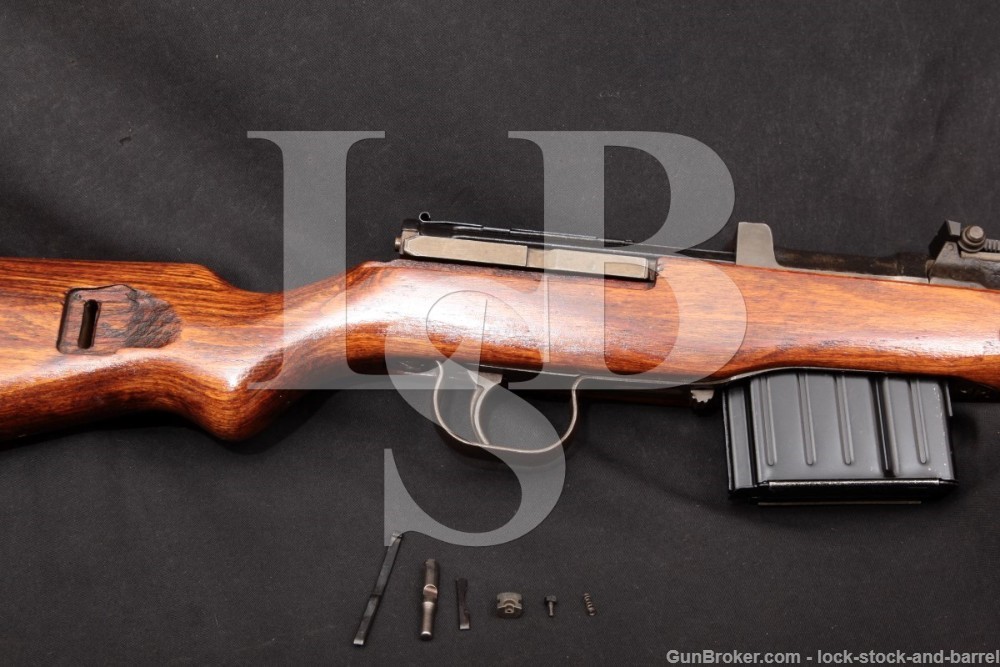 Year of Manufacture: 1944. Based on the lack of cosmetic milling to the receiver and the lack of a bolt hold-open latch, this rifle was produced in the last 3 months of 1944. See page 112 of Darrin Weaver’s book, Hitler’s Garands – German Self loading Rifles of World War II.

Sights / Optics: The front sight is a bladed post atop a ramped base. The rear sight is a “V” notched sliding escalator marked from “1-12”. The right side of the receiver has integral rail for an optic.

Stock Configuration & Condition: The two piece laminate stock has a pistol grip, metal nosecap with sling bar, hole for the missing cleaning rod, through bolt, sling well with pass through, and a metal buttplate with hinged door for storage. The butt has small spare bolt parts stored inside; see photos. The buttplate shows scrapes, oxidation & excess wood finish. The handguard is ventilated. It shows a long glued & repaired crack down the center. The rear of the crack flexes slightly when pressure is applied. The front of the forearm is pieced together. It is missing a piece of wood under its nosecap retaining spring. The nosecap is secure but does not slide back far enough to lock onto the retaining spring. The stock shows various scrapes & compression marks. Areas of the finish have been dulled by scuffs. The sides of the stock show spots of mildew. The LOP measures 13 ½ inches from the front of the trigger to the back of the buttplate. The stock rates in about Very Good Plus overall condition as refurbished.

Overall Condition: This rifle retains about 95% of its metal finish, as refinished. Some of the new blue finish on the receiver and top cover has been lost. The original blue finish below it shows some discoloration from oxidation. The receiver,  top cover, and barrel show scrapes & small scratches. The front sight shows oxidation and is scratched on both sides. The bottom metal shows small scratches and discoloration from oxidation. The screw heads show use. The markings are mostly deep. Overall, this rifle rates in about Very Good Plus condition, as refinished.

Box, Paperwork & Accessories: The rifle comes with one ten round magazine. From our research we believe it is a post war magazine made on Nazi factory equipment (claus.espeholt.dk/g43_mags.html). It shows scrapes, small scratches, and areas of thinning. It is in about Very Good Plus condition. The butt has small spare bolt parts stored inside; see photos. They are in about Fine condition.

Our Assessment: This Nazi marked K43 was made in 1944 by Walther. It was built without a hold open latch on the top cover. This was done to simplify production while the Nazis were getting their butts kicked near the end of WWII. It has Nazi markings and a good bore. It even comes with some spare bolt parts. It will add nicely to a WWII collection.

The K43 has a much improved gas system (borrowed from the Russians) and is much more reliable than its predecessor the G41. For some video history on the K43 (and G41 if you search) see the Forgotten Weapons You Tube channel at: youtube.com/watch?v=zUjPeAgvf3U.