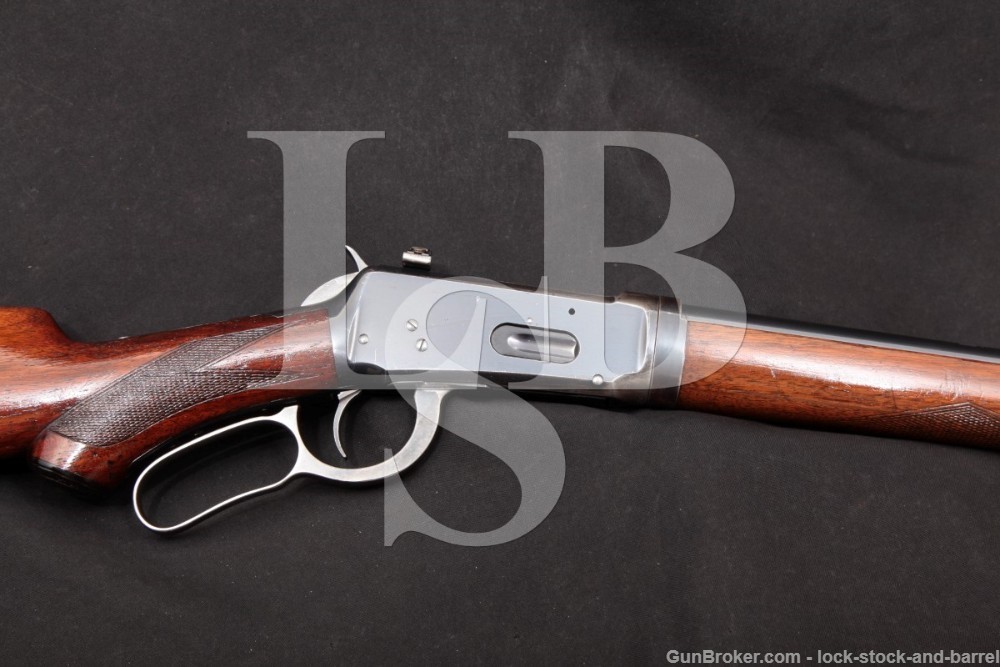 Markings: The top of the barrel is marked “MANUFACTURED BY THE WINCHESTER REPEATING ARMS CO. / NEW HAVEN. CONN. U.S.A. PATENTED AUGUST 21. 1894.” in front of the rear sight dovetail, the left is marked “-NICKEL STEEL BARREL- / ESPECIALLY FOR SMOKELESS POWDER” and “32 W.S.” There is a Winchester proof mark on both the top-rear of the barrel and the top-front of the receiver. The take-down lever on the magazine tube is marked “-PAT. JUNE 6. 1893-“. The underside of the receiver is marked “580442” ahead of the lever mechanism and “76” behind the lever mechanism. The upper tang is marked “MODEL 1894 / -WINCHESTER- / TRADE MARK REG. IN U.S. PAT. OFF.”. The left of the bottom tang has assembly number “497”, found again stamped in the rear of the buttstock under the buttplate and on the inside of the plate at the toe.

Sights / Optics: The front sight is a Lyman beaded blade dovetailed to the front of the barrel. The rear of the barrel has a dovetail for a rear sight which is not present. The top tang is drilled, tapped and filled for a tang sight (none present). The left of the receiver is drilled and tapped with a Redfield 102E receiver sight installed, adjustable for windage and elevation.

Stock Configuration & Condition: The stocks are two-piece checkered walnut with capped forend, capped pistol grip, straight comb and steel crescent buttplate. The stocks have several scattered light nicks, dings, scuffs and scratches. There are areas of thinning finish in the grip areas, most notable on the forend. The checkering is generally well defined. There are no chips or cracks. The LOP measures 13″ from the front of the trigger to the back of the buttplate. The plate has strongest finish on its top tang with some remaining finish in the face which is mostly worn to white with scattered nicks and scratches. Overall, the stocks are in about Very Good condition.

Overall Condition: This rifle retains about 80% of its metal finish. The finish is thinning at all edges. The barrel has generally strong finish with the muzzle in the white, some scattered spots of light surface oxidation, a few scattered light scratches, and wear on the bottom from the magazine takedown lever. The barrel extension has handling wear on the bottom and a few light marks. The exposed portion of the magazine tube has strong finish but the cap has wear. When the magazine is threaded out for takedown, there is operational wear from removal. The receiver has handling wear on the bottom and in the top tang with scattered light nicks, scratches, and infrequent spots of light surface oxidation. The lever, bolt and hammer have operational wear, the lever also has handling wear. The screw heads range from sharp to disfigured with useable slots. The markings are clear. Overall, this rifle is in about Very Good condition.

Mechanics: The action functions correctly. The hammer has a half-cock position and there is a lever safety. The lever locks up properly and the trigger is crisp. We did not fire this rifle. As with all used firearms, a thorough cleaning may be necessary to meet your maintenance standards.

Our Assessment: The Winchester Model 1894 rifle followed the other John Browning designed lever action rifles to become one of the most famous and popular hunting rifles of all time. It was the first commercial sporting rifle to sell over 7,000,000 units, making the name “Winchester” synonymous with all lever action rifles. It was also the first commercial American repeating rifle built to be used with smokeless powder. It was introduced in 1894 in two black powder cartridges, the .32-40 and .38-55 Win. rounds, but by the next year Winchester had developed a different steel composition that could handle higher pressures, and the .30-30 Win. family of cartridges was born. This is a Winchester Model 1894 rifle made in 1896 with a 26” round barrel and chambered in .32 Winchester Special, a necked up .30-30 cartridge. The rifle was special-ordered as not just a takedown, but with capped pistol grip on its checkered walnut stocks. The receiver has had a vintage Redfield aperture sight installed as well as a Lyman front sight. The combination of features will make this attractive to collectors, but its great bore and strong mechanics also mean this rifle could still spend another few lifetimes taking game for the lucky winner. Please see our photos and good luck!