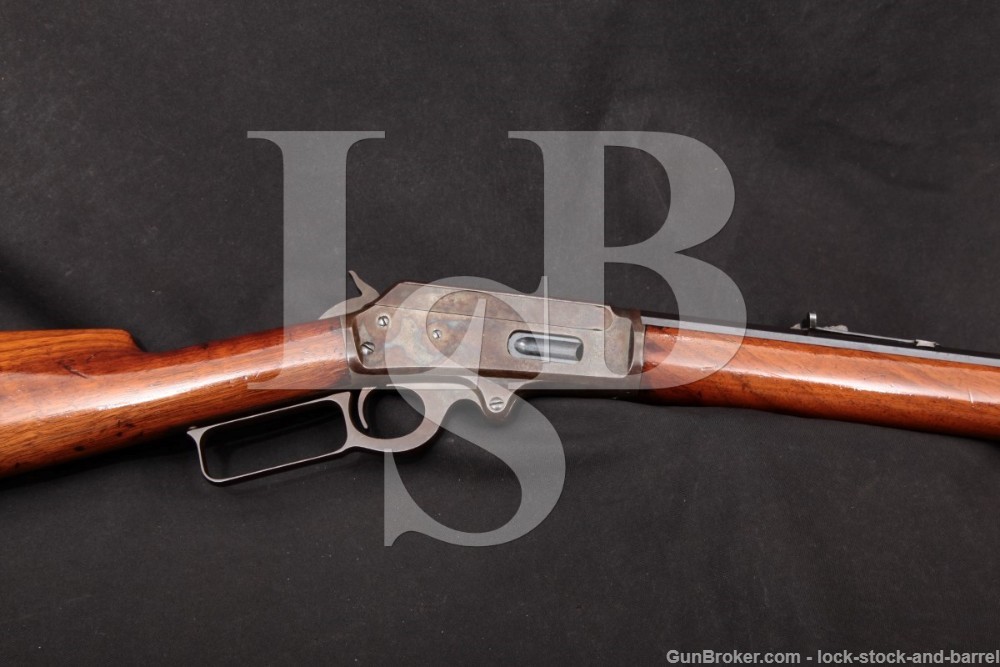 Stock Configuration & Condition: The stocks are two-piece smooth walnut with a straight grip, capped forend, and case-colored steel crescent buttplate. The stocks have several scattered light-moderate nicks, dings, scuffs and scratches, some areas show discoloration from handling and oil, there are a few short, thin grain-line cracks at edges and some marring at the toe. Apart from the toe, the wood is generally slightly proud to the metal. The LOP measures 13″ from the front of the trigger to the back of the buttplate. The plate’s case color has mostly muted, strongest on its top tang with scattered light surface oxidation on the rear face, most of which has gone to a light patina. Overall, the stocks are in about Very Good condition as Antique.

Bore Condition: The bore is gray with well defined rifling. There is light erosion scattered through the bore, mostly in the grooves.

Overall Condition: This rifle retains about 70% of its metal finish. The finish is thinning at all edges. The barrel has generally strong finish with some scattered light surface oxidation, infrequent spots of minor surface erosion, and a few light nicks and scratches. The magazine tube has generally strong finish with two patches of light-moderate surface erosion on the bottom-right about 3″ and on the left about 7″ from the front with similar light wear and surface oxidation to the barrel. The receiver’s case color has faded toward the front but is generally strong toward the rear with some areas still showing vibrant color and well-defined figuring. The receiver has some scattered discoloration from oxidation, handling wear in the tangs and lever and a couple of spots of light surface erosion at the top edges toward the front. The lever, bolt and hammer show light operational wear. The screw heads range from sharp to lightly disfigured with useable slots. The markings are clear. Overall, this rifle is in about Fine condition as Antique.

Mechanics: The action functions correctly. The hammer has a half-cock safety, the lever locks up solidly and the action is smooth. We have not fired this rifle. As with all used firearms, a thorough cleaning may be necessary to meet your maintenance standards.

Our Assessment: Marlin’s Model 1893 rifle was actually the precursor to the Model 36 and eventually the Marlin Model 336. Few guns have ever been produced and used as widely as the 336 and this is where it all started. The M1893 was renamed the Model 93 in 1905, but Model 1893 marked receivers continued to be used up for several years. This M1893 rifle was made around 1898 and designed for smokeless powder. Chambered for .30-30 Winchester, it has likely taken its share of deer over the last century. It is an interesting example in the evolution of the design, having the reinforcing screw for the trigger plate on the left of the receiver but was made before the cartridge stop was extended, requiring a hole in the bottom of the trigger plate at the front. This rifle is in about Fine condition with about 70% of its finish remaining. The stocks have some wear, but the buttstock is serialized and original to the rifle, which is nice if you’re going to add this to a Marlin collection. The bore is fairly nice and the mechanics are strong. This is a great example of an 1893, with a special-order 28″ barrel and serial matching parts. Please see our photos and good luck!

CA Legal or CA Private Party Transferable (THIS SECTION DOES NOT APPLY TO OUT OF STATE RESIDENTS): This Antique can be transferred in California but must be transferred through your local dealer or at our Simi Valley location; we cannot ship directly to you. For a gun to be classified Antique and be shipped direct, California requires that “the firearm use ammunition manufactured in or before 1898, for which ammunition is no longer manufactured in the United States and is not readily available in the ordinary channels of commercial trade.” Penal Code: 16170. Out of state residents can disregard this section – your local laws apply.