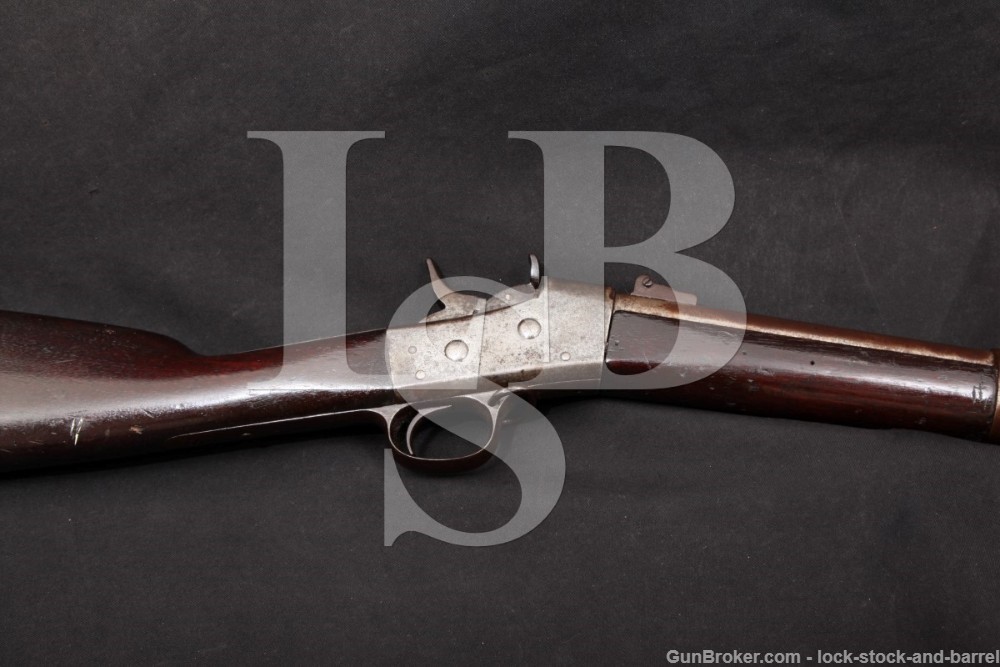 Stock Configuration & Condition: The stocks are two-piece smooth walnut with capped, triple-banded forend grooved for the included ramrod, straight grip, straight comb, and steel carbine-style buttplate with sling swivels mounted to the front of the trigger guard and the middle barrel band. The stocks show moderate wear with scattered nicks, dings, scuffs, scrapes, scratches, bruising and a few gouges. There are a few small chip losses along the top edges of the forend and there are either chip-losses or deep gouges around the rear barrel band. The LOP measures 13 3/8″ from the front of the trigger to the back of the buttplate. The plate has consistent surface oxidation throughout but minor wear. Overall, the stocks are in about Good condition as Antique.

Type of Finish: The rifle appears to have been finished bright or “in the white”.

Bore Condition: The three-groove bore is gray with well defined rifling. There is scattered light erosion and spots of pitting in the bore.

Overall Condition: The metal surfaces show infrequent minor pitting, mostly in the receiver, scattered light surface erosion and surface oxidation throughout. There are some scattered light nicks and scratches. The screw heads range from sharp to tool marked with strong slots, at least the front sling-swivel screw is a replacement. The markings are mostly clear, slightly worn. Overall, this rifle is in about Good-Very Good condition as Antique.

Mechanics: The action functions correctly. There is a rotating extractor on the left side of the breech. The hammer has half cock and full cock positions. The firing pin is intact. The face of the breech-block has been widened by inserting a plate with round edges to fit the rim of the .58 Roberts cartridge, a factory feature on these rifles. We have not fired this rifle. As with all used firearms, a thorough cleaning may be necessary to meet your maintenance standards.

Box, Paperwork & Accessories: The ramrod is included. It shows wear and surface oxidation throughout.

Our Assessment: Between 1867 and 1902 over 1,000,000 Remington Rolling Block military rifles and carbines were manufactured by the Remington Company, in a variety of calibers and barrel lengths, based on their N0. 1 rifle. The action was so simple and rugged that they were virtually impossible to wear out. Remington exported these rifles all over the world and most saw quite a bit of use and abuse over the course of a long service life. Following the end of the Civil War, there were huge numbers of rifled muskets being surplused out by the U.S. Army and one way Remington was able to cut costs was to buy them up and use the barrels to fit to their rolling block receivers. Many were sleeved and chambered for the .50-70 Gov’t or other cartridges, but there were also some which retained the original bore and were chambered for .58 Caliber cartridges such as .58 Berdan or, in this case, .58 Roberts. U.S. Army Brigadier General B. S. Roberts developed the cartridge for a cartridge conversion rifle of his own design and, while his rifle never drew much attention, the cartridge was seen as suitable for use by Remington. The rifle is in about Good-Very Good overall condition with scattered surface oxidation and erosion on its metal surfaces, wear in the stocks consistent with a 150 year old rifle and a decent bore for a gun which would have seen use exclusively with black powder. The action is still in good shape and functions properly. This would be a welcome addition to any collection of Remington Rolling Block rifles. Please see our photos and good luck!