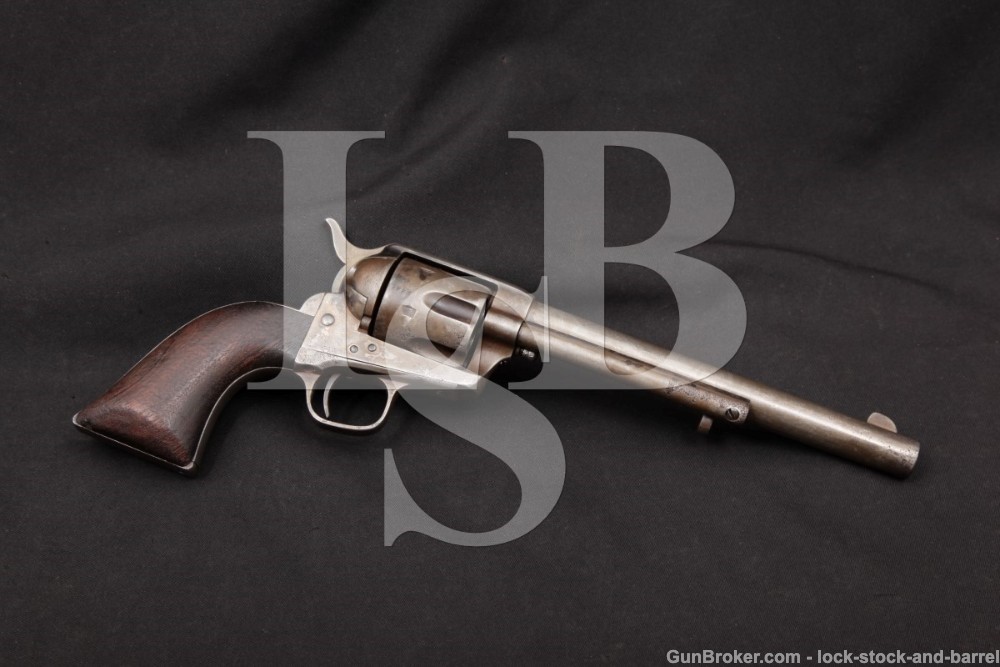 Markings: The top of the barrel is marked “-COLT’S PT. F. A. MFG. Co. HARTFORD. CT. U.S.A.-”, the underside is marked “P” and “J”, under the ejector rod housing at the rear the barrel is marked “8446”. The bottom of the frame at the front, the bottom of the trigger guard at the front and the butt are each marked “18446”. There are small “J” inspection marks behind the trigger guard serial-marking, at the top of the backstrap behind the hammer, and on the outside of the cylinder. The outside of the cylinder is also marked “P” and “8446”, the rear face has “M” and “C” markings. The left of the frame is marked “PAT. SEPT. 19. 1871 / PAT. JULY. 2. 1872” and “U.S.”. The rear face of the loading gate has assembly number “620”. The backstrap inlet of the grip has faint remnants of pencil-marking but it is not legible. The hammer slot is marked “C”.

Sights / Optics: The front sight is a tapered quarter-round blade fixed to the barrel. The rear sight is a “V” groove in the top strap.

Stock Configuration & Condition: The grip is a one-piece smooth wood. A chip-loss has been sanded over at the bottom-front on the left, both sides have been sanded toward the bottom. There are scattered compressions, bruises, nicks and scratches. There are no cracks. Overall, the grip is in about Good-plus condition as refinished Antique.

Bore Condition: The bore is light gray with well defined rifling, sharp where not interrupted by erosion. There is light erosion scattered through the bore with some spots of more moderate erosion and pitting.

Overall Condition: This revolver retains about 5% of its current metal finish consisting of scattered spots of buing in protected areas. Most surfaces have the gray hue of worn cold-blue with scattered patches of surface erosion and light pitting. The left of the muzzle has been heavily polished, perhaps ground. The screw heads range from sharp to disfigured with useable slots. Most markings are clear, some are slightly obscured by erosion. Overall, this revolver is in about Good condition as Antique.

Our Assessment: Colt’s Single Action Army is, perhaps more than any other, an iconic American pistol. It was the U.S. issue sidearm for the last two decades of the 19th century, used by pioneeers, outlaws and lawman across the expanding nation, and captivated audiences on the silver screen and television (and still does, today). This U.S. Cavalry model is from the 1875 Ordnance Sub-Inspected series with inspection marks from sub-inspector Johnson (“J”) and A.P. Casey (“C”). Its serialized parts match with proper inspection marks, though the stocks have had any of their original markings removed. The revolver would almost certainly have been issued during the Indian Wars, yet still remains in Good condition as refinished. It has a more than decent bore for a 145 year old gun which would have seen use with black powder, and strong mechanics apart from the worn cylinder-stop notches. This Cavalry model Single Action Army will make a nice addition to any Colt or U.S. small arms collection. Please see our photos and good luck!