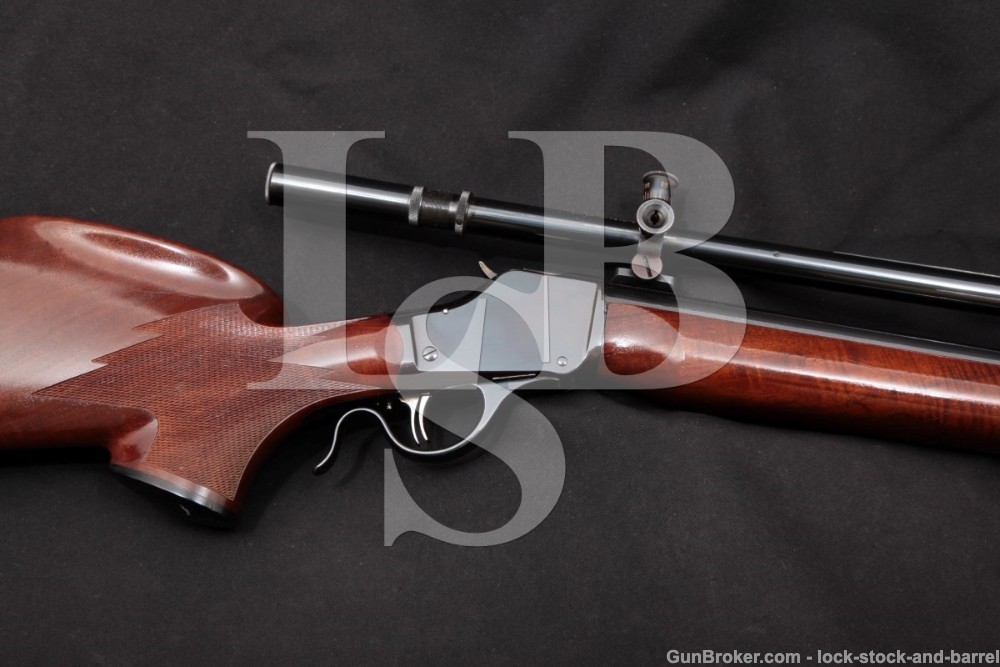 Serial Number: 17849 (the serial appears to have been applied at the time of customization and not original to the rifle)

Year of Manufacture: Originally manufactured between 1885-1923, according to our research it was customized in the 1950s.

Caliber: The barrel is marked “.220 SK”, we have not been able to identify the chambering. .220 Swift does not chamber. The chamber is for a bottleneck, centerfire, .22 caliber cartridge. The chamber should be cast to confirm the actual cartridge.

Sights / Optics: There is no provision for iron sights. The barrel has two male dovetail bases installed with rings holding a Lyman Super Target Spot 12x scope with fine crosshair reticle. The windage and elevation adjustments are made with the rear ring. The scope’s glass is fairly clear with threaded caps on each end and the body has light wear with infrequent minor surface oxidation, in about Very Good condition.

Stock Configuration & Condition: The stocks are two-piece walnut with ebony capped semi-beavertail forend, checkered ebony-capped pistol grip, monte-carlo comb, solid black rubber Pachmayr buttpad, and sling swivels front and rear. The stocks have some scattered light nicks, dings, scratches and scuffs including a few in the caps. There are no chips or cracks. The checkering is sharp. The LOP measures 12 7/8″ from the front of the trigger to the rear of the pad, 12 3/8″ to the back of the wood. The pad has wear at the heel. Overall, the stocks are in about Very Good-plus condition as not original to the rifle.

Finish Originality: Refinished, we believe the finish is original to customization by Pfeifer.

Overall Condition: This rifle retains about 94% of its metal finish. There are patches of finish loss on the left-rear of the barrel and on the left of the receiver at the bottom-front. There is infrequent scattered minor surface oxidation and some other minor wear. The receiver has a slight plum hue. The lever, breech-block and hammer show light operational wear. The screw heads range from sharp to tool marked with strong slots. The markings from the customization are quite clear, the original patent marking has soft edges but is legible. Overall, this rifle is in about Very Good-plus condition as customized.

Mechanics: The action works correctly. The hammer has a safety notch. The front trigger can be set by pushing the rear trigger forward. When not set, the trigger breaks crisply and is fairly light. When set, the trigger is very light and crisp. The lever locks up solidly. We have not fired this rifle. As with all used firearms, a thorough cleaning may be necessary to meet your maintenance standards.

Our Assessment: When they were first manufactured, the John Browning designed Winchester Model 1885 rifles were deemed stronger than the prior Sharps rifles, and the different sight and trigger options available made them an instant hit with hunters and target shooters alike. The Model 1885 rifles were targeted at competitors in “Match Shooting”, a sport which was extremely popular from about 1871 to 1917. The Winchester rifles challenged the Sharps, Remington, Maynard and Ballard rifles, and quickly became known for their reliability and accuracy. Major Ned Roberts, inventor of the .257 Roberts cartridge, described the Model 1885 as “the most reliable, strongest and altogether best single shot rifle ever produced”. It should come as no surprise, then, that the 1885 has been the base for some of the best custom single-shot rifles ever made. This example was customized by Pfeifer Rifle Company with stocks by Kennedy (we presume this marking indicates Monty Kennedy). Joe Pfeifer was the leading custom gunmaker in the United States according to a November 1950 article in Popular Mechanics which states “The difference between Pfeifer and, for example, Remington is the difference between a small outfit that builds high-speed racing cars and General Motors. One makes a product to the customer’s own specifications, the other turns out fine rifles on a mass-production basis.” Pfeifer was located in Roscoe, California, later re-named Sun Valley, and built both custom rifles and made custom barrels for individual and commercial customers, producing some 700 barrels per month in 1950. The caliber marking on this rifle, “.220 SK” is something of a mystery, but once you figure out the right cartridge, this Pfeifer custom promises to be a tack driver. Please see our photos and good luck!