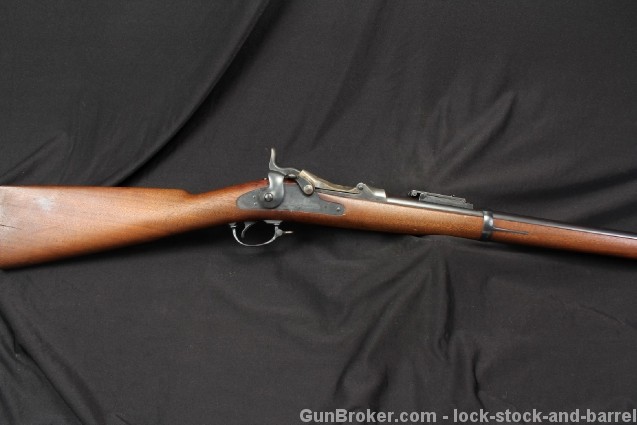 Sights / Optics: The front sight is a fixed blade and the rear sight is a Buffington model.

Stock Configuration & Condition: The stock is the original one piece, oil finished and military inspected piece of wood. There are scattered dings, marks and depressions, but no cracks. There is truly very little wear on the wood (especially relative to its age), there is very little oil staining and this may be the best piece of wood we have ever seen on a Trap Door. There is a tiny chip on the right side, forward of the sideplate. The LOP measures 13 3/8″ from the front of the trigger to the back of the steel plate. The stock rates in about Excellent overall condition.

Bore Condition: The bore is bright and the rifling is sharp. There is mild and scattered erosion towards the muzzle.

Overall Condition: This rifle retains about 90% of its metal finish. The balance of the finish shows thinning from a bayonet at the muzzle, marking and dings to the barrel at both bands and a light drift to patina at the chamber. The lock and trigger guard are also very blue, with freckled surface rust. The upper tang and lock are beautifully case color hardened, with still bright colors. The butt plate shows the much thinning and about 30% coverage of surface rust. Nonetheless, this is the best honest Trapdoor we have seen in a long time. The screw heads are about as sharp as you could expect, showing only slight distress. The markings are crisp. Overall, this rifle rates in about Excellent condition, certainly for its age.

Our Assessment: This is no doubt the best 1884 Trapdoor we have seen in years, possibly ever. The stock is as sharp as the metal. Everything is properly and well-marked and the gun is truly as sharp as could be expected for 123 year of wear and age.

The most dramatic change to the rifle design, which is often considered to be the identifying feature of the model 1884, was a new rear sight which had been designed by Lieutenant Colonel R. A. Buffington of the U.S. Army Ordnance Department. This sight however was not perfected until 1885.

The principle feature of this new sight was a rack and pinion style windage adjustment. Unlike previous sights, the base was not used for any position other than point blank. The raised leaf had graduations from 200 to 1400 yards. A new barrel band was also designed to accommodate this new sight so that it could lay flat in the point blank position.

Marksmen generally favored the new sight, but general troops were less enthusiastic about it and often considered it to be an annoyance.

The Model 1884 was also produced in a carbine version. It was found that the rear sight could be easily damaged when removing the rifle from the carbine boot. The rear barrel band was therefore modified in 1890 to include a rear sight protector.” http://en.wikipedia.org/wiki/Springfield_Model_1884