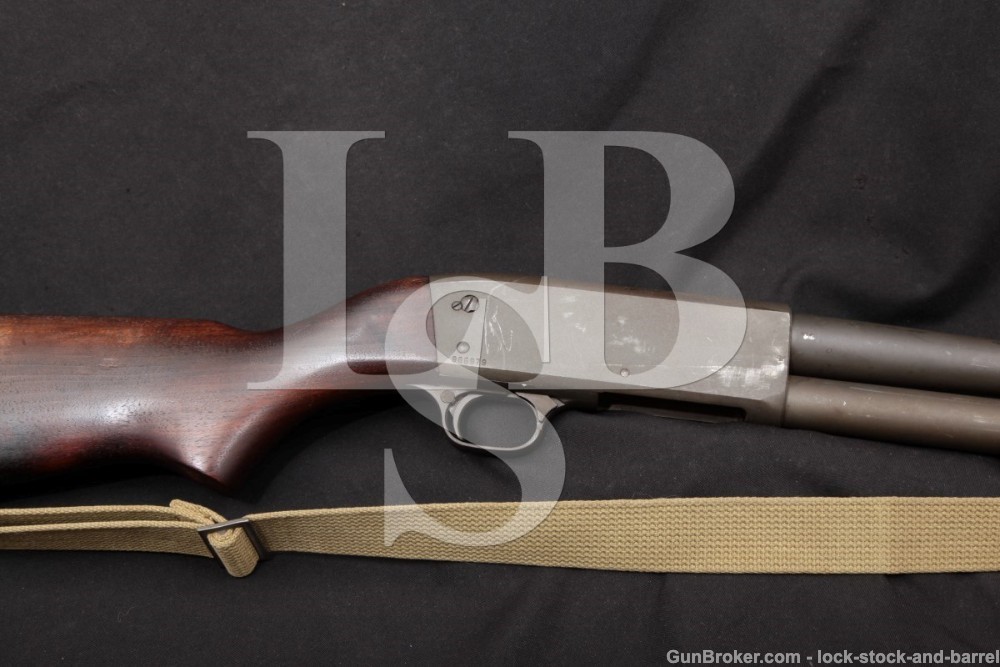 Sights / Optics: There is a bead mounted to the front of the bayonet lug. The barrel is drilled and filled for a bead underneath.

Stock Configuration & Condition: The stocks are a two piece walnut set with grooved forend, pistol grip, straight comb, serrated black plastic Ithaca buttplate and sling stud in the belly. The stocks have minor handling wear with a few scattered light marks, a more notable bruise in the belly forward of the sling stud and two grain lines which are opening on the left of the buttstock toward the rear. There are no chips or cracks. The LOP measures 14″ from the front of the trigger to the back of the buttplate. The plate has a loss on the left edge with scattered light wear. The stocks rate in about Very Good overall condition.

Bore Condition: The bore is bright. There is no erosion, but there is some stubborn fouling.

Overall Condition: This shotgun retains about 90% of its metal finish. The barrel has light wear from the bayonet lug/heat shield assembly with a few scattered light marks behind. The magazine tube and action bar light operational wear and there are a couple of light marks on the magazine bracket. The majority of the balance in finish is found in scattered scratches and scuffs on the receiver, most notable on the top and right. The screw heads range from sharp to tool marked with strong slots. The markings are clear. Overall, this shotgun rates in about Very Good condition.

Mechanics: The action functions correctly. The shotgun ejects out the bottom of the receiver. It can be slam-fired. We have not fired this shotgun. As with all used firearms, a thorough cleaning may be necessary to meet your maintenance standards.

Our Assessment: The Ithaca 37 enjoys a good reputation for its durability, ambidextrous ejection design, smooth action and of course for being one of few pump shotguns which can be “slam-fired”, meaning that with the trigger depressed, pushing the slide handle forward and locking the action will allow the chambered round to be fired without needing to reset the trigger. In addition to seeing use by bird and deer hunters for generations, the Model 37 has served in WWII, the Vietnam War and in countless law enforcement agencies across the country. This example is in the Trench-Gun style, with a 6-row ventilated handguard/bayonet lug installed. The assembly is proper for an Ithaca Trench-Gun, but the factory cylinder bore barrel has a previously drilled hole for a bead and without any ordnance or US Property markings, it appears this gun was produced for law enforcement as a Riot-type gun. A gun like this with a two-foot bayonet sticking off the end would probably put second thoughts in most rioters! The gun is in Very Good condition with the great majority of its parkerized finish remaining, a bright bore, and great mechanics. This would be a great gun for an Ithaca collector or a military shotgun collector as a placeholder for an issued Trench-Gun. If the collectors don’t snap it up, it will still serve as a great defensive shotgun and host for an M1917 bayonet. Please see our photos and good luck!