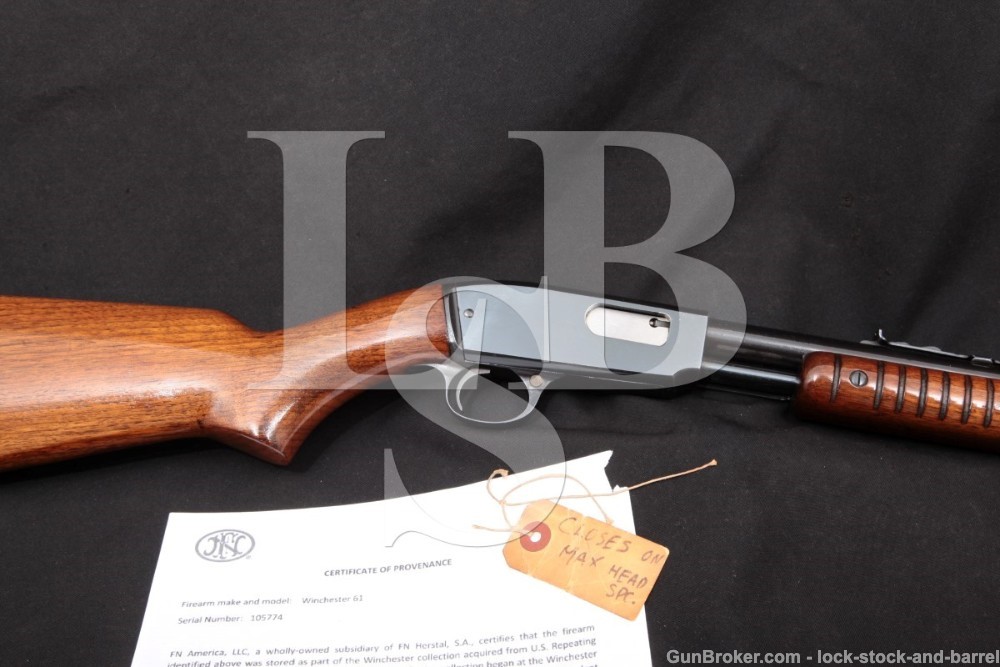 Markings: The left side of the barrel is marked “MADE IN NEW HAVEN, CONN. U.S. OF AMERICA / -WINCHESTER PROOF STEEL-“, -“WINCHESTER / -TRADE MARK-“-, “MODEL 61 – 22 S. L. OR L.R.-“. The top of the receiver at the front each have an ovalled “WP” proof (the top of the barrel does not have a “WP” proof, see Our Assessment). The bottom of the receiver at the front and the bottom of the trigger guard assembly at the front each are marked with the serial number.

Stock Configuration & Condition: The stocks are two-piece walnut with a flat-bottom grooved slide handle, flat-bottom pistol grip, straight comb and checkered steel buttplate. The stocks show light handling wear with some scattered light nicks, scratches and handling marks. There is a line of pooled finish along the belly. There are no chips or cracks. The LOP measures 13 1/4″ from the front of the trigger to the back of the buttplate. The plate has minor wear around the edges with well defined checkering. Overall, the stocks are in about Very Good-Fine condition.

Overall Condition: This rifle retains about 95% of its metal finish. The finish is lightly thinning at some edges. The magazine tube, action bar and bolt show light operational wear. There are some scattered light scratches and scuffs, most in the receiver. The screw heads are sharp with light handling wear around the outside of the takedown screw. The markings are clear. Overall, this rifle is in about Fine condition as factory configured (see Mechanics).

Mechanics: This rifle was released from the Winchester Factory Collection with a hang-tag hand-marked “CLOSES ON / MAX HEAD / SPC.”. This, coupled with the lack of a “WP” proof on the barrel leads us to believe that the rifle has excessive headspace and may have been retained in the factory collection for quality control, as an example to display this when training employees to use a headspace gauge. Due to this, this rifle may not be safe to fire. The action functions correctly and smoothly, and locks up solidly. We did not fire this rifle. As with all used firearms, a thorough cleaning may be necessary to meet your maintenance requirements.

Box, Paperwork & Accessories: This rifle comes with a certificate of provenance from FN America. The letter states that the rifle was retained in the Winchester factory collection and was still in inventory of the U.S. Repeating Arms Company when it was sold to FN Herstal in 1989. It remained in inventory of FN America until the collection was sold in July 2018. The letter has a loss at the top-right corner as from a staple being torn out, but otherwise shows only minor storage wear. Also included is the factory hang tag described above. The hang tag shows discoloration from age and oil, crease marks, and has a tape-repaired tear down the middle.

Our Assessment: Ever since 1890 when Winchester brought out a slide-action rifle with that year’s model number, the Model 1890 pretty much ruled the roost for rimfire repeaters, also known as gallery guns. This tubular-magazine rimfire was wildly popular not only in the plethora of shooting galleries that were across the U.S. but in the hands of young boys and men who loved to shoot and hunt small game. The Model 1890 was a John Browning design and the first commercially successful repeating rimfire rifle. Sixteen years later an almost identical rifle sans the expensive-to-manufacture octagon barrel and crescent buttplate was introduced as the Model 1906. Both models continued to be produced until 1932, when they were replaced by the more modern Models 61 and 62. The Model 61 followed Winchester’s pump shotgun line by introducing a hammerless model which was less prone to snagging in the field and provided less entry for debris to gum up the action. This Model 61 was retained in the Winchester factory collection through their transition into the U.S. Repeating Arms Co. and their subsequent purchase by FN Herstal. Based on the hang tag which accompanied the rifle and the lack of a proof on the barrel, we believe that this rifle was retained in the factory collection as an example of a rifle with excess headspace, which could have been used by their quality control department to train employees on how to use a headspace gauge. The rifle was released from the collection which was maintained by FN in 2018 and comes with an FN Certificate of Provenance. This interesting history will make for a fine addition to a Winchester collection and is certainly not something you will find every day. Please see our photos and good luck!