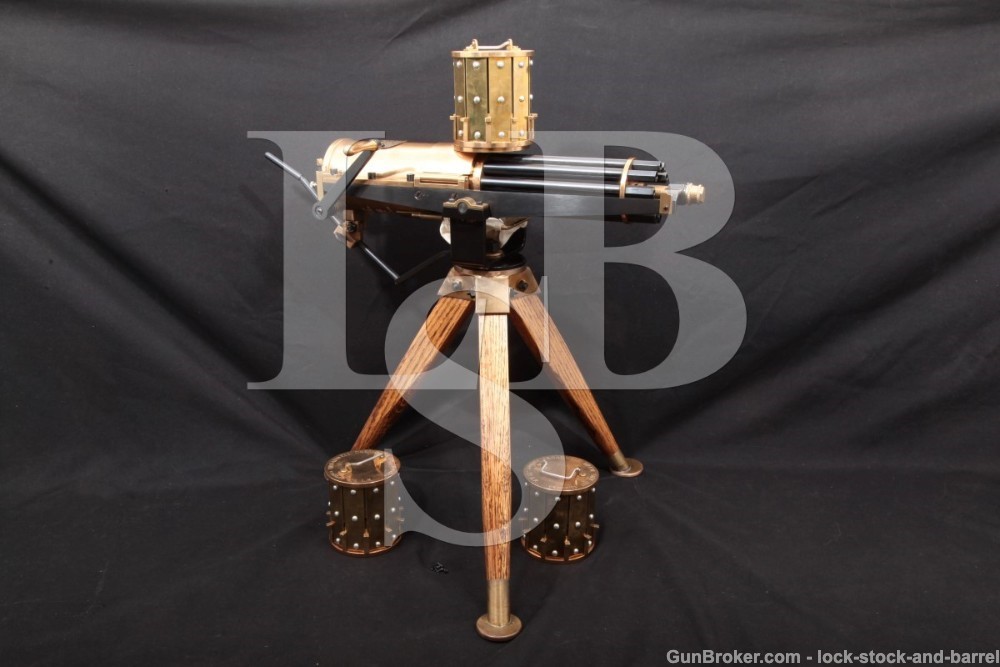 Stock Configuration & Condition: The gun is mounted on a steel and brass swivel mount installed on a wood tripod with brass feet. There is an arm at the rear of the mount which allows the gun to be elevated and depressed with a locking screw to hold it in place at the desired elevation. The elevation arm shows minor use-wear. Otherwise, the steel and wood portions of the tripod and mount show only light handling marks. The brass portions of the tripod are developing a light patina with some scattered spots of darker oxidation. Overall, the mount and tripod are in about Fine condition.

Overall Condition: This gun retains about 95% of its metal finish. The brass has scattered discoloration from oxidation, most of which should polish out easily with a few scattered minor scratches and marks. The blued steel parts show only light handling marks. With the magazine plate opened, there is light operational wear visible on the bolts, bolt cluster housing and breech-faces. The screw heads are undamaged. The markings are clear. Overall, this gun rates in about Very Good-Fine condition.

Mechanics: The action functions correctly. The magazine mounts to the posts on the top of the plate. When one slot of the magazine runs dry, the user can rotate the magazine to the next slot. We did not fire this gun. As with all used firearms, a thorough cleaning may be necessary to meet your maintenance requirements.

Box, Paperwork & Accessories: This gun comes with the tripod mount as described, a canvas brass-catcher which installs on the bottom of the casing, three Broadwell-type drum magazines and an assortment of extra roll-pins and small screws. The magazines show similar scattered light discoloration to the other brass components with the followers sliding smoothly, in Very Good-Fine condition.

Our Assessment: Richard Gatling was a prolific inventor with contributions in the fields of agriculture, screw-propellors and his most famous invention, the Gatling Gun. Interestingly, his intent with the Gatling Gun was to reduce deaths from war by allowing a smaller number of troops to produce a greater volume of fire, thus reducing the number of men required to fight in wars. While this did not exactly come to pass, his gun was nonetheless revolutionary, allowing for sustained fire at high rates and, though not considered a machine gun by todays definitions, paved the way for the truly automatic weapons which were to follow. Gatling Guns saw limited use in the American Civil War, being personally purchased by some officers for their units, but was not officially adopted by the U.S. Military until 1866. The guns would also be used by European colonial powers in Africa and Asia and by South American nations including Argentina and Peru. This is a fully functional miniature reproduction chambered for the ubiquitous .22 LR cartridge. It will certainly be easier to set up at the range than a full-sized Gatling Gun and also less expensive to feed than its larger, .45-70 caliber cousins. The gun is in Very Good-Fine condition with some scattered minor discoloration in the brass and handling marks in its blued steel finish, strong mechanics, and great bores. It comes with three Broadwell drum magazines, so you’ll be able to have some helpers load while the shooter has fun! This is a rare opportunity to have a fully functional Gatling Gun of your very own that can also be set up on your desk at home. What could be cooler than that? Please see our photos and good luck!