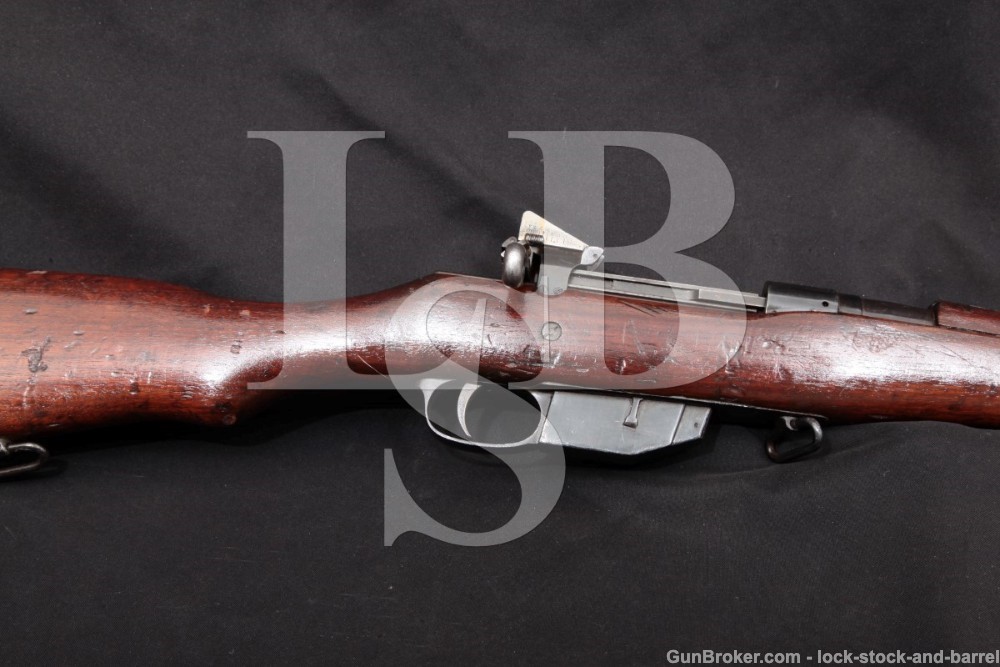 Sights / Optics: The rear sight is specific to Mk IIIB rifles sold to Great Britain.
The front sight is a bladed post set between 2 protective ears. The rear sight is a fixed aperture set within a protective frame. When flipped up it becomes sight ladder with a sliding aperture. The ladder housing is marked from “2-12” on each side.

Stock Configuration & Condition: The hardwood stock has a semi pistol grip, through bolt, barrel band, nosecap with bayonet lug & stacking loop, 2 sling loops, and a metal buttplate with hinged door for storage. The buttplate shows scrapes, scratches, and thinning. The storage door has been treated with cold blue and shows discoloration. The handguard shows arsenal repaired cracks. It is also missing chips of edge wood at the rear. The wood shows numerous scrapes, scratches, and compression marks. Several have damaged portions of the surface wood. These marks have been oiled. The LOP measures 13 inches from the front of the trigger to the back of the buttplate. The stock rates in about Good to Very Good overall condition as refurbished.

Overall Condition: This rifle retains about 95% of its metal finish as refinished. The magazine has oxidation showing through the finish. The metal shows various scrapes & scratches as well as some discoloration from oxidation. The screw head show some use. The small markings on the metal are faded due to refinishing. The main markings on the receiver are deep. Overall, this rifle rates in about Very Good condition.

Our Assessment: This Canadian Ross Rifle Mk IIIB is a contract rifle sold to the British. The rear sight is specific to Mk IIIB Rifles sold to Great Britain (see photos). The rifle has been refinished but still has deep markings on the top of the receiver. The British proofs and inspection stamps on the barrel shank and receiver are somewhat faded. The rifle is over 100 years old and can still put lots of .303 down range.
The Ross Rifle Mk III is a Military variation of the Ross Rifle M-10. Ross Military Rifles were replaced by Enfield Rifles in 1916. This straight pull Ross Rifle MKIIIB will add to your collection.