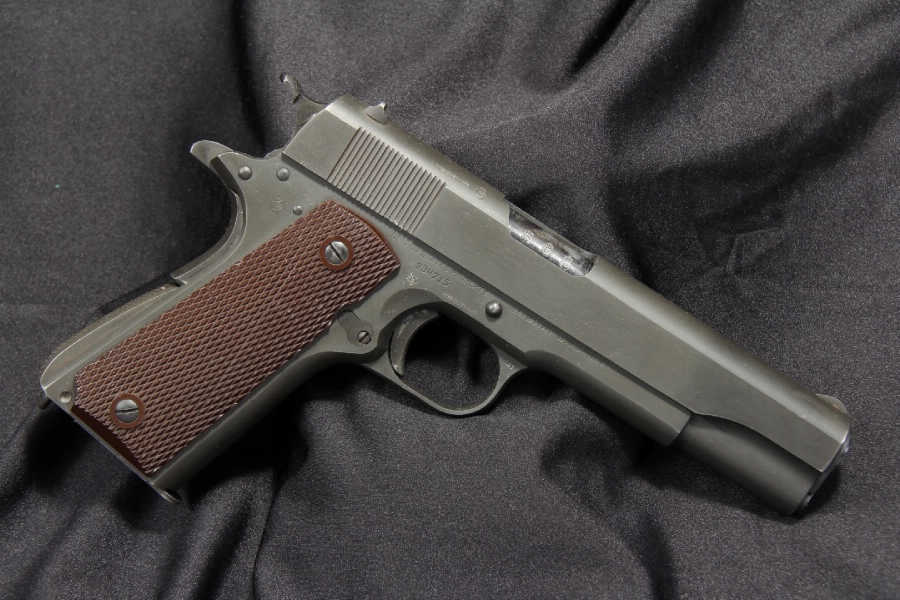 Sights / Optics: The front sight is a fixed blade. The rear sight is a dovetail set notch.

Stock Configuration & Condition: The grips are checkered brown plastic, with large reinforcement rings. The checkering is sharp and there is little wear at all to the panels. The grips rate in about Excellent overall condition.

Bore Condition: The bore is bright and the rifling is sharp. There is no mentionable erosion in the bore.

Overall Condition: This handgun retains about 90% of its metal finish. There is slight marking to the fragile matte surface, especially on the top of the slide and underside at the dust cover. The British marks are crisp and several are absolutely over the finish. The finish has only barely begun to age and there is general and light edge wear. There is no pitting or erosion, and except for a few surface rubs, this is about the highest condition Canadian 1911-A1 we have ever seen. The screw heads are sharp. The markings are crisp. Overall, this handgun rates in about Excellent condition.

Our Assessment: This is a rare gun, one of 1,515 Canadian Lend Lease Colt 1911-A1’s, properly marked and in about as sharp of condition as could ever be asked for. These are a well-known segment of 1911 collecting, and no Colt or 1911 collection is complete without one. There is an interesting discussion of these guns here: http://coolgunsite.com/images/1911/1943Colt/1943Colt1911A1.htm

“Pistols in this serial range (From about serial #930000 to about serial #940000) are often seen with commercial marked (apparently leftovers) slides or commercially marked receivers (marked “S” for “sales” on the top of the receiver). Also in this serial number range all of the known 1,515 Canadian “Lend-Lease” pistols. These Canadian pistols can only be identified by their “Broad Arrow enclosed in a “C” mark” that was applied to the Left rear of the slide and to the left of the receiver above the magazine release. To make things even more interesting, most of the Canadian pistols were returned to England after the war, and due to British proof laws, they were proof marked on the receiver, slide, and barrel with normal British proofs at the time they were disposed of. Therefore a normal Canadian 1911A1 pistol will have both the broad arrow-C marks on the receiver and slide, but will have the normal British proofs as well. Not all of the Canadian Lend Lease pistols were returned to England after the war as some were apparently used in Canadian prisons and possibly elsewhere. These Canadian prison pistols received the “Broad Arrow enclosed in a “C” mark” but did not receive any of the normal British proofs.

Several years ago the Canadian Government decided to get rid of their “Evil Handguns” by selling them to the “Yanks” and about 6 Canadian property marked M1911A1 pistols were sold at auction in the USA. These pistols were all described as 70% original finish with property numbers electric penciled in the right side of the slide. (The plot thickens!) Several months later a Canadian Lend Lease pistol appeared in the catalog of a well-known, nationally advertised Southern California dealer of US military pistols. The pistol differed from normal Canadian Lend Lease pistols in that it did not have the normal British proofs. Its serial number was IDENTICAL to one of the pistols sold at the auction a few months earlier. However the Southern California dealer described the pistol as having 99+% original finish and had the original shipping box. If only the Monarch Butterfly could match the miraculous metamorphous of this pistol?

Our pistol has no such irregularities and is exactly as it should be.