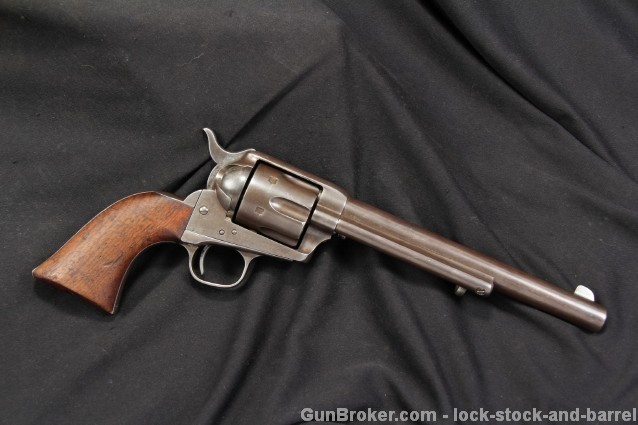 Sights / Optics: The front sight is a fixed blade. The rear sight is a notch in the top strap.

Stock Configuration & Condition: The grips are one piece smooth wood, with the serial number correctly written into the backstrap channel. The exteriors are too worn to show external markings. There is age darkening and wear, with some small losses at the toes. These show a great appearance and fit the metal quite well. The grips rate in about Very Good overall condition.

Finish Originality: We see no evidence of a refinish, though there is no finish remaining.

Bore Condition: The bore is almost bright and the rifling is deep. There is only very faint frosting, but no real mentionable erosion in the bore. This bore is far better than average for this revolver.

Overall Condition: This handgun retains about 0% of its metal finish. The pistol has developed a smooth, light and generally even patina. The frame is a bit mottled, and there are only a handful of very minor and very scattered dings or erosion pricks in the metal of the barrel. This gun has the correct hammer checkering, with the elongated deep cross hatched checkering. There is a possibility that this gun was cleaned some time ago, long enough for the metal to naturally patina again. We suspect this because the metal is very smooth, while the age is natural. You would honestly be hard pressed to find a higher condition Ainsworth Colt. The screw heads are a bit marked, but very serviceable. The markings are clear. Overall, this handgun rates in about Fine condition.

Mechanics: The action functions correctly. The springs are strong and the lock up/timing remains good. We did not fire this handgun.

Our Assessment: This is certainly the pinnacle of Colt collecting, the most desirable gun inspected by the most desirable inspector. Ainsworth inspected Colts are the first of the US Colt Single Action Army’s, seen only through serial number 14998, and seen rarely today. These guns were frequently rebuilt in arsenals, and are seldom encountered in parts original condition. This gun has all matching serial numbers (including the grips), all correct markings where they remain (everywhere but the grip exteriors) and even the correct ejector rod and hammer. (As confirmed by Kopec’s “Cavalry & Artillery Revolvers … a continuing story”, Chapter 1.)

Few Colts have remained in their original condition as this one, even fewer are US marked and only a handful are Ainsworth inspected. This is truly a jewel for any collection and we only hope the pictures do it justice.

Wikipedia: “The OWA Colt refers to the earliest issued Single Action Army guns which were inspected by Orville W. Ainsworth. Ainsworth was the ordnance sub-inspector at the Colt factory for the first 13 months (Oct. 1873 to Nov. 1874) of the Single Action Army’s production. It was Ainsworth who inspected the Colts used by Col. G.A. Custer’s 7th Cavalry at the Battle of the Little Bighorn. The number range of possible Little Bighorn Colts is 4500 – 7527.

Henry Nettleton was the U.S. Principal Sub-inspector in 1878 at the Springfield Armory. Second only to the OWA Colts, Nettleton Colts are prized by serious collectors. Both the Nettleton and OWA Colts have the cartouche (OWA or HN) on the left side of the wood grip.

By the mid-1870s, the Army had purchased a significant number of Smith and Wesson Schofield revolvers chambering a shorter .45 round. Logistical problems arose because the ammunition was not interchangeable. The Colt revolvers would accept the shorter round but not vice versa. For a time, the Government stopped orders for the longer Colt cartridge and used the Smith and Wesson round exclusively. The S & W Schofield was soon retired and sold to the civil market.

In 1895-96, the Government returned 2000 SAA revolvers to Colt’s to be refurbished; 800 were issued to the New York Militia with the 7 ½” barrel and 1200 were altered to a barrel length of 5½”. In 1898, 14 900 of the SAA revolvers were altered the same way by the Springfield Armory. The original records of the War Department do refer to these revolvers with the shortened barrel as the “Altered Revolver”. The name “Artillery” is actually a misnomer, maybe because the Light Artillery happened to be the first units to be armed with the altered revolver.

The Artillery Single Actions were issued to the Infantry, the Light Artillery, the Volunteer Cavalry and other troops because the standard issue .38 caliber Colt M 1892 double-action revolver was lacking stopping-power. For that reason, the .45 Artillery SAA Revolvers were used successfully by front troops in the Spanish-American War and the Philippine-American War. Theodore Roosevelt’s Rough Riders charged up San Juan Hill wielding the .45 caliber Artillery Model.

The Artillery Model usually had mixed numbers. It can be identified by the U.S. on the frame, the inspector’s stamps on different parts (such as a tiny A for Orville W. Ainsworth, DFC, HN, RAC for later inspectors and K for replacement parts) and the cartouche of Rinaldo A. Carr (RAC), the inspector who inspected the refurbished guns, on the grip.