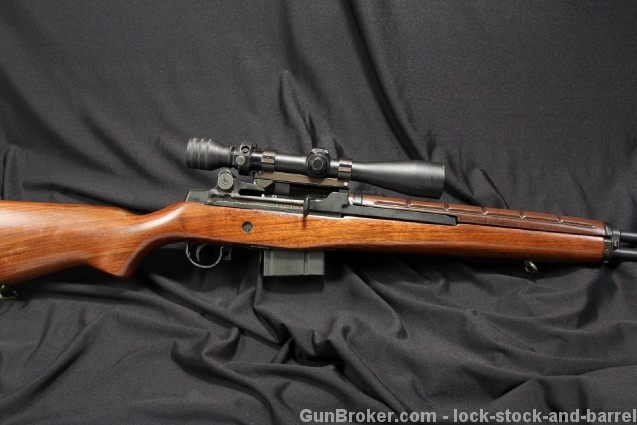 Year of Manufacture: Pre 1974. The current Springfield Armory did not produce this gun; it was made before they bought the company in 1974.

Barrel Length: 24″. There is a muzzle break installed.

Sights / Optics: The front sight is a National Match winged blade and the rear sight is an NM/2A. There is an AR TEL scope installed, with clear glass and intact crosshairs. The body of the scope shows cosmetic marking, but no dents.

Stock Configuration & Condition: The stock is a bedded and varnished piece, serial numbered to match. The hand guard is fiberglass, with much finish loss. The stock shows scattered dings and marks to the finish, though no splits or cracks. There is some finish loss and thinning scattered. The right side of the wood shows some wear from contact while operating the op rod. The LOP measures 13″ from the front of the trigger to the back of the steel plate. The stocks rates in about Very Good overall condition.

Overall Condition: This rifle retains about 90% of its metal finish. The balance of the finish shows thinning, especially at the trigger guard and mag well. The scope mounting screw has thinned, and there is general thinning and edge ear on the scope mount. Many of the markings have been filled with white for ease of readability, these can be removed. The vast majority of the metal finish is retained. The screw heads are sharp, though there is some wear to the scope ring screws. The markings are clear. Overall, this rifle rates in about Fine condition.

Box, Paperwork & Accessories: Only one 10 round Magazine, the scope, the accessories in the buttstock (photographed) and the mount are included.

Our Assessment: The United States Army wanted an accurate sniper rifle during the Vietnam War. The M14 was selected because of its accuracy, reliability, and the ability for a quick second shot. As a result, in 1969, the Rock Island Arsenal converted 1,435 National Match (target grade) M14s by adding a 3–9× Adjustable Ranging Telescope and providing National Match grade ammunition. It was designated the M21 in 1975. The M21 remained the Army’s primary sniper rifle until 1988, when it was replaced by the M24 Sniper Weapon System; some M21s were later re-issued and used in the Iraq War.

In standard military use, the M21 uses a 20 round box magazine as the other members of the M14 family and weighs 11 pounds (5.27 kg) without the scope. The U.S. military never officially authorized or purchased magazines in any other capacity, although 5- and 10-round magazines are available.

This is a very early and desirable M1A / M21, suitable for US Arms Collectors and discerning shooters alike.