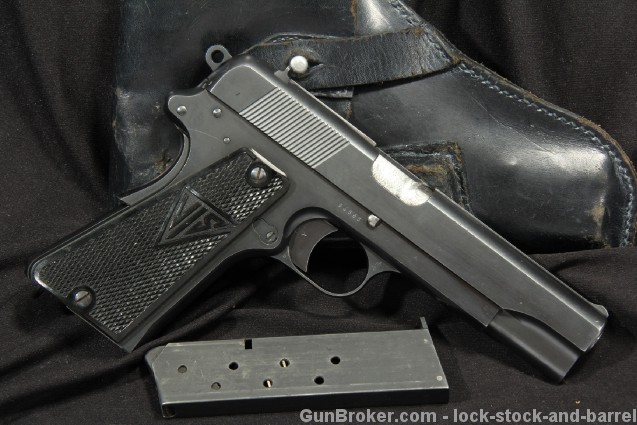 Sights / Optics: The front sight is part of the rib. The rear sight is a dovetail set notch.

Stock Configuration & Condition: The grips are checkered plastic. There is a “FB” on the left panel and a “VIS” on the right. The checkering is very sharp and these panels show no splits or cracks. There is very little wear whatsoever on these panels and the screws even show fire blue. The grips rate in about Excellent overall condition.

Overall Condition: This handgun retains about 93% of its metal finish. The only mentionable wear on this pistol is on the right side of the slide. There is edge wear here and scattered surface freckling. There is one more freckle on the right side of the frame. There is some holster wear at the muzzle. The edges are sharp and the surfaces are true, this is a very sharp Radom. The screw heads are only slightly marked. The markings are crisp, except for the proofs on the trigger guard bows. Overall, this handgun rates in about Excellent condition.

Box, Paperwork & Accessories: An unmarked black military style flap holster and 2 original magazines are included. The leather is very soft and the stitching is sound. The magazines rate in about Excellent condition and the holster in about Very Good.

Our Assessment: This is an early and high quality Radom. Wikipedia: Originally designed by Piotr Wilniewczyc and Jan Skrzypinski in 1930 at the Fabryka Broni (Arms Factory) in Radom under Director Kazimierz Oldakowski, it was adopted in 1935 as the standard handgun of the Polish Army. Considered by many to be one of the finest handguns ever produced, it is highly prized among collectors of firearms. The design was generally based on American firearms inventor John Browning’s Colt M1911A1, operating on the short-recoil principle, with the barrel being cammed down and away from the locking lugs in the slide. Unlike M1911, the barrel was not cammed by a link, but by a ledge of sorts, which contacts a portion of the barrel and forces it down as it is moved rearward with the slide by the recoil force, similarly as in Browning’s FN Hi-Power pistol and Spanish Ruby 0.45 ACP. It differs from M1911A1 also in other details. Its characteristic feature was a triangular grip shape, wider at the bottom, offering good ergonomics and firm grip. On the right side grip cover, the pistol had letters VIS in a triangle, on the left side—FB (for Fabryka Broni—”Arms Factory”) The handgun was prepared in late 1930, and at the beginning of 1931 the first pistols were ready for testing. Initially it was named WiS (an acronym of the Polish designers’ names); later the name was changed to Vis, meaning “force” in Latin, with the wz. abbreviation for wzór (“model”). The tests proved that the handgun was very accurate and stable (due to its size and mass, most stresses are absorbed and not passed on the shooter); while at the same time remaining reliable after firing more than 6,000 rounds. The Vis was generally regarded as one of the best military pistols of that period. Production started in the state armory Fabryka Broni in Radom in late 1935, and the following year it was introduced as the standard weapon of Polish infantry and cavalry officers. Successively, other units were to be equipped, and by 1942 all other handguns were scheduled to be withdrawn from service. By mid-1938, it was introduced to the armored and air forces. Before the Invasion of Poland, approximately 49,400 (out of 90,000 ordered) were delivered to the army. There was also a small information series of .45 ACP version, with 7 round magazine, but they were not produced in greater series. A .22 LR variant also existed, but no details are known, and its series was not produced in great numbers. After the Polish defeat in 1939, the Germans took over the Radom Armory and continued production of the Vis under the new name of 9 mm Pistole 645(p), which was for some reason often rendered as P 35(p) (the suffix “p” means “polnische”) (the German pistols of the first series had inscriptions VIS Mod.35 and P.35 (p) on the left side). Up to 1945, between 312,000 and 380,000 were produced and used by the German paratroopers and police.