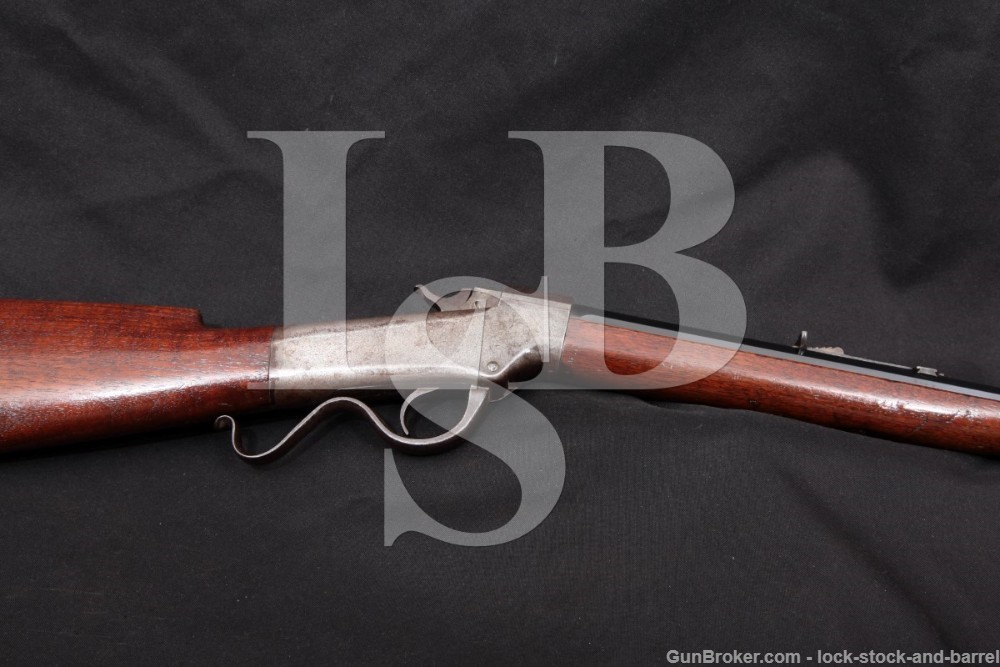 Barrel Length: The heavy octagon barrel is 30” in length and measures 0.858” flat-flat at the muzzle.

Stock Configuration & Condition: The stocks are two piece walnut with a lacquered finish. The buttstock has a straight grip with a case colored crescent shaped buttplate. The forend has a shallow Schnabel type tip. There is oil staining at the front of the comb and around the metal parts. There are two dings and a bruise in the underside of the wrist, the latter caused by the lever, and a few more dings and drag lines in the remainder of the buttstock. There are several dings and  small gouges in the forend along with a large but shallow bruise on the left side. The wood to metal fit is outstanding. The LOP measures 13 3/8” from the front of the trigger to the back of the buttplate. The buttplate shows finish loss with a dark plum colored patina forming and scabs of solid erosion. The buttplate is in about Good condition. The stocks are in about Very Good Plus overall condition.

Type of Finish: The barrel is blued and the receiver and lever are case colored.

Finish Originality: The receiver finish is original, but the barrel finish is not.

Bore Condition: The bore is bright tending to gray at the muzzle. The rifling is sharp. There is a single tiny spot of erosion about 1 ½” behind the muzzle.

Overall Condition: This rifle retains about 62% of its current metal finish. The receiver shows finish loss with surface frosting, several dark spots of erosion and a few light handling marks. The lever has developed a dark patina with scattered light erosion. There are tiny scabs of solid erosion scattered over the front half of the barrel with scattered spots of light pitting under the finish in the rear half, and light scratches from sanding under the finish throughout. There are several tiny marks through the finish in the front half of the barrel with a ding and a drag line in the upper right shoulder behind the rear sight. The edges of the barrel are relatively sharp. The screw heads are disfigured. The serial numbers are clear but the receiver address is shallow with some markings very difficult to read. Overall, this rifle rates in about Good to Very Good condition.

Mechanics: The action functions correctly but the lever is loose and wants to fall open about 1 ¼”. The breechblock features a reversible firing pin and the hammer has a 1/8th cock safety position. We did not fire this rifle. As with all used firearms, a thorough cleaning may be necessary to meet your maintenance requirements.

Our Assessment: In the late 1870’s and through the 1880’s Marlin made single shot sporting rifles based on Ballard’s patent, first as J.M. Marlin and later as Marlin Firearms Co. The rifles came in a variety of shapes and sizes, and from everything from a .22 Rimfire to .45-70 Govt. At first, rifles were made with interchangeable rimfire-centerfire firing pins, and marked with 1875 patent date to so signify, like this rifle. Later, as centerfire cartridges dominated, the reversible firing pin became obsolete. This is a Marlin Ballard No. 1 ½ Hunter’s Rifle with a heavy octagon barrel chambered for .45-70 Govt. This rifle is somewhat rare. Although this model was made from 1879-1883, with most made from 1881-1883, this rifle was made between 1879-1880 as evidenced by its J.M. Marlin address on the receiver. The rifle is in about Good to Very Good overall condition with 62% of its current finish remaining. The bore is mostly bright with sharp rifling and a single spot of erosion near the muzzle. The rifle has a reversible firing pin and the serial numbers on the barrel and receiver are matching. This rifle would be a nice addition to any collection of falling block or rolling block rifles from the 19th Century. With its outstanding bore it ought to be a tack driver, but the shooters may not be able to outbid the collectors on this one.