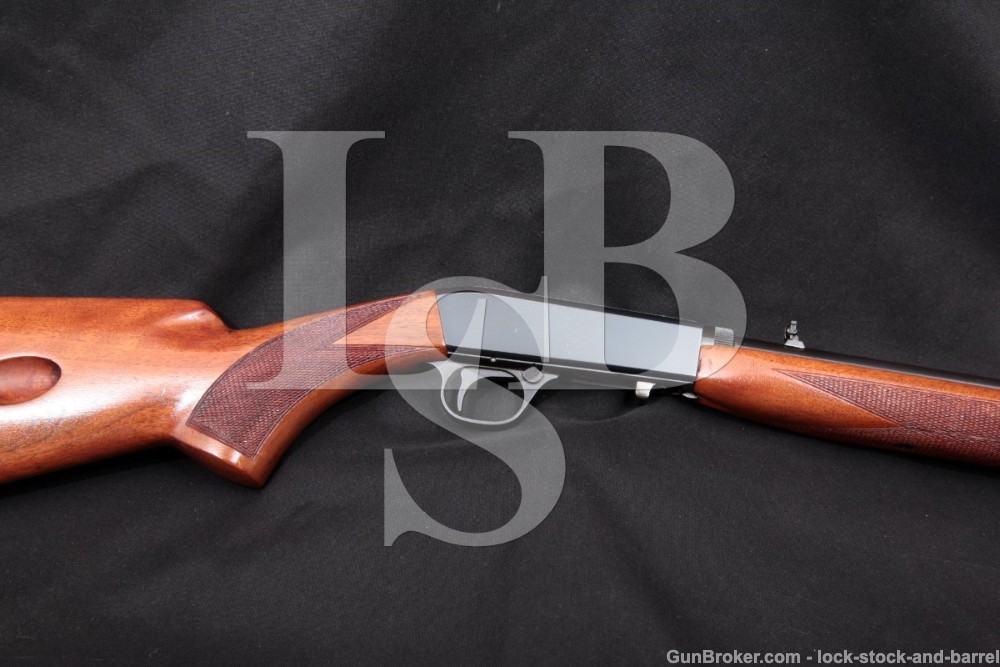 Action Type: This is a semi-automatic rifle with a tubular magazine in the butt. It is a takedown model with a removable barrel.

Stock Configuration & Condition: The stocks are two-piece checkered, oil-finished walnut with semi-beavertail forend, a flat-bottom pistol grip, straight comb and serrated steel buttplate. The stocks have minor handling wear with a few scattered light marks, most in the belly and front of the grip. There are a few spots of discoloration from age and oil at the buttplate. There is a thin crack in the wrist which starts at the rear edge of the trigger guard and extends back into the left-side wrist checkering. The checkering is well defined, mostly sharp. The LOP measures 13 3/4″ from the front of the trigger to the back of the buttplate. The plate has some scattered light surface oxidation but otherwise shows minor wear and sharp serrations. Overall, the stocks are in about Very Good condition as likely refinished.

Overall Condition: This rifle retains about 90% of its metal finish. The finish is thinning lightly at most edges. There are several scattered light nicks, scratches and spots of minor surface oxidation, mostly in the receiver. The screw heads are sharp. The markings are clear. Overall, this rifle is in about Very Good condition.

Mechanics: The action functions correctly. We did not fire this rifle. It has a cross-bolt safety at the front of the trigger guard. As with all used firearms, a thorough cleaning may be necessary to meet your maintenance standards.

Our Assessment: FN first started making this rifle for Browning in 1914. Originally, FN was licensed to produce and sell this rifle in Europe while Remington was licensed for US production and distribution. In 1955, Remington’s license expired and FN was able to begin marketing the gun in the United states under the Browning Arms Co. name. FN manufactured the rifle through 1974, after which it was made by Miroku of Japan. This is an FN production rifle from prior to 1955 which would have been produced originally for the European market but has made its way across the pond to America. This rifle is in about Very Good condition with about 90% of its finish remaining, some light wear in the stocks, a bright bore and strong mechanics. The wood is of the correct contour and checkering pattern for one of these rifles, but we have not seen one with this sort of finish, indicating that it may have been refinished. This vintage rifle could be used for hunting small game and informal target practice, but this early European production rifle will likely gain some interest from the Browning collectors. Please see our photos and good luck!