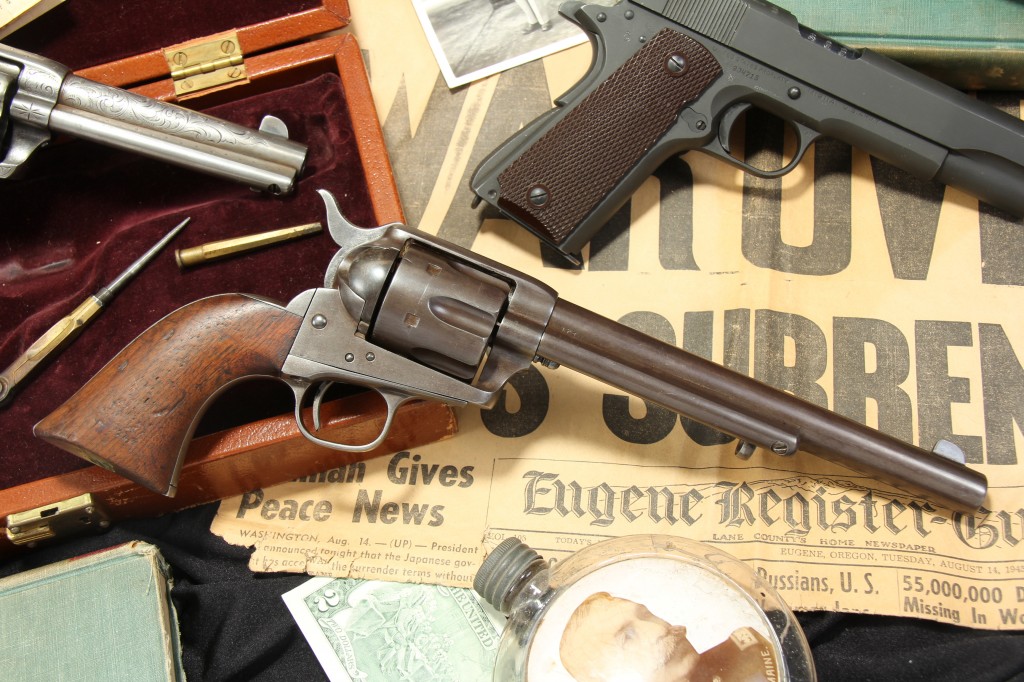 What does the Holy Grail look like?  If you’re a Colt collector, a revolver aficionado, or a fan of the Old West, here are the magic words which reveal that Grail: “All original, with papers,  all matching numbers, bearing the OWC cartouche, for Ordnance Inspector Orville Wood Ainsworth.”

To the collector, all original, good condition, U.S. Cavalry and Artillery Single Action Armies (those produced between 1873 and 1891) are among the most valuable Colts ever made. Especially valuable, often going for well over $20,000 and even $200,000, are the OWA (Orville Wood Ainsworth) Colts .

The “OWA Colt” refers to the earliest issued Single Action Army guns which were inspected by Orville W. Ainsworth. Ainsworth was the ordnance sub-inspector at the Colt factory for the first 13 months (Oct. 1873 to Nov. 1874) of the Single Action Army’s production. It was Ainsworth who inspected the Colts used by Col. G.A. Custer’s 7th Cavalry at the Battle of the Little Bighorn. The number range of possible Little Bighorn Colts is 4500 – 7527.

Got it?  This Colt is marked with the cartouche of the man who inspected the guns that won the American West.  What stories does this fine old SAA carry?  Unmolested later by the Army, who cut numbers of the graceful 7 1/2 inch barreled Cavalry Models down to a handier 5 1/2 inch length, this one could have been in the holster of a cavalryman, a scout, or a hard riding Buffalo Soldier.  Heck, the Rough Riders carried SAA Colts up San Juan Hill in the Spanish American War!

Let your imagination run free, but this one is here, now, matching numbers, and those Ainsworth inspection marks.  And you can own it, courtesy of Lock Stock & Barrel Investments.

And if you are curious how LSB acquired such a piece for a no reserve auction? It is because the second to none reputation we have developed for full disclosure, strong and often record record prices, accurate and detail display, 3 day right of return, extensive and specific expertise, a loyal following of thousands of repeat bidders & proven results!