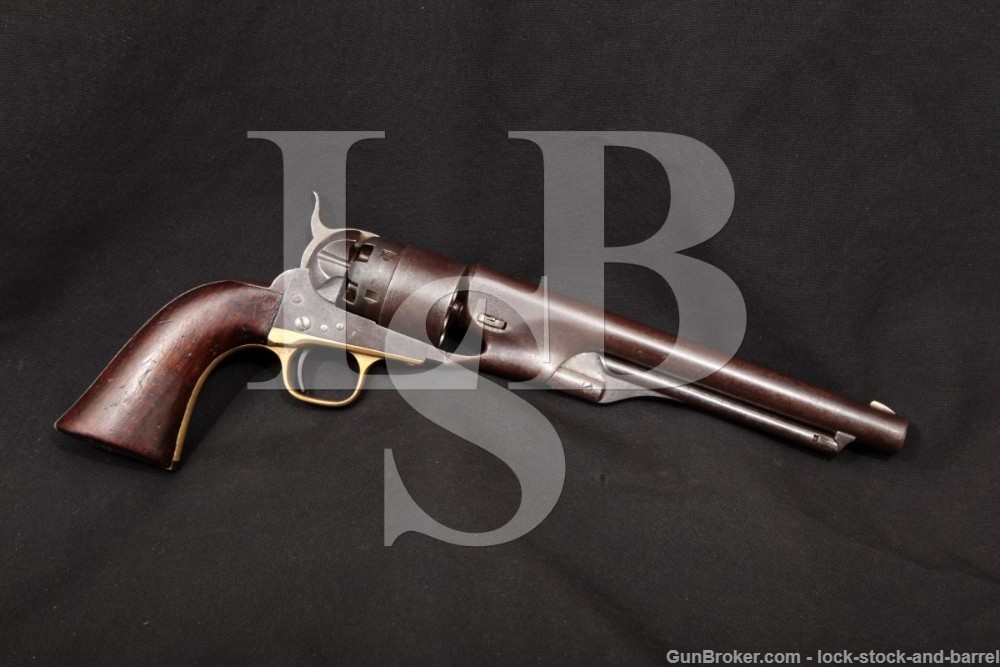 Sights / Optics: The front sight is a german silver blade, fixed to the barrel. The rear sight is a small “V” notch in the hammer, visible when cocked.

Stock Configuration & Condition: The grip is a one piece smooth walnut. The grip has light-moderate handling wear with thinning finish, several scattered light scuffs and compressions and several more notable compressions on the bottom. There are no chips or cracks. Overall, the grip is in about Very Good condition as Antique.

Finish Originality: We see no evidence of refinishing, only normal wear and heavy cleaning. The cylinder is not original to the gun.

Bore Condition: The bore is gray and the rifling is sharp where not interrupted by erosion. There is light-moderate erosion with some light pitting scattered through the bore.

Overall Condition: This revolver retains approximately 15% of its metal finish, all in the brass trigger guard. The brass shows a mustard patina with the crystalline appearance of old brass. The steel surfaces have developed a light patina. There are scattered light nicks and scratches, tool marks around the wedge on each side of the barrel assembly. There is infrequent minor surface erosion, most notable around the nipples and on the front face of the cylinder. The screw heads range from sharp to disfigured with useable slots. The markings are generally clear with much of the detail of the naval scene gone. Overall, this revolver is in about Very Good condition as Antique.

Mechanics: The action functions correctly. The barrel has no play to the frame. The cylinder locks up with little play on each of the six chambers. The trigger is crisp. We did not fire this handgun. As with all used firearms, a thorough cleaning may be necessary to meet your maintenance requirements.

Our Assessment: The Colt Model 1860 Army revolver was easily the most popular army revolver on both sides of the conflict during the American Civil War. Approximately 127,000 of these revolvers were purchased for use by Union forces and several of the Confederate states had obtained a few thousand before the start of the hostilities as well. The Model 1860 Army was the successor to the Third Model Dragoon and ranks third in total number produced of the various models of percussion Colt handguns. This revolver was made in 1861 and almost certainly saw use in the Civil War. All serialized parts are matching except for the cylinder. After the war, it was not uncommon for revolvers to be re-arsenaled and have parts mixed with other guns, though this could have been done after the gun entered civilian hands. If stil in inventory, this revolver would likely have also seen use in the Indian Wars. The revolver is in about Very Good condition as Antique with a decent bore for a 150 year-old black powder revolver, and surprisingly strong mechanics. This revolver represents an important piece of history, and we only wish it could tell us its story. Please see our pictures and good luck!