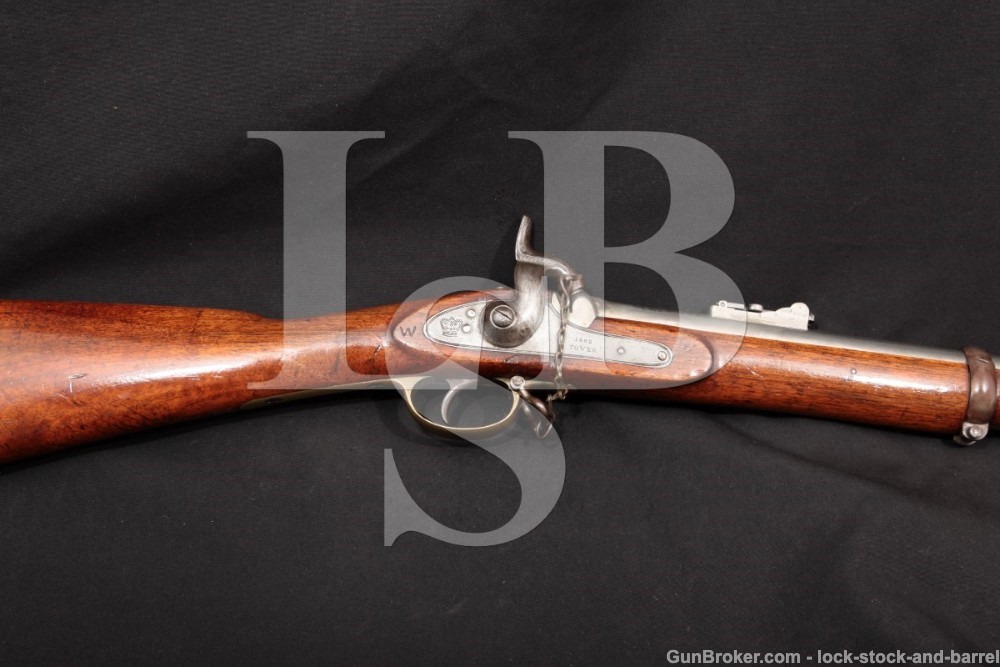 Markings: The lockplate is marked “1862 / TOWER” in front of the hammer and with a crown behind. The right and top of the barrel near the nipple are each marked “K / 9”. The left of the barrel has British commercial export proofs including two “25”s, (25 gauge=.577″) and “N.J.”. The left of the stock on the flat between the lockplate screws has a boxed “N.J.” cartouche with “E-H” behind the rear screw, the right is hand-carved “W” behind the lockplate. The bottom of the wrist has a “JS Anchor” Confederate marking behind the top tang and the belly near the toe is marked “KING & PHILLIPS”. The right-rear of the buttstock has the remnants of a King & Phillips maker’s cartouche. The snap-cap chained to the guard has a broad-arrow marking.

Sights / Optics: The front sight is a blade with a rectangular base which doubles as the bayonet lug, fixed to the front of the barrel. The rear sight is a combination sliding elevator and ladder sight that is screwed to the barrel. The base has four steps and the right side of the base is marked “1 2 3 4” for use with the slider as an elevator sight. The right side of the ladder is marked from “5” to “8” with “9” at the notch in the top of the ladder. There is a “V” notch at the front of the ladder when it is folded down and used as an elevator sight, a “V” notch in the top edge of the slider and a third “V”-notch in the top of the ladder for use as a ladder sight.

Stock Configuration & Condition: The stock is one piece walnut with a straight grip, brass buttplate, a brass trigger guard and a brass nosecap, three barrel bands with sling swivel in the front band (and another in the front of the trigger guard, and the lock-screw escutcheons have square ears. The stock shows light-moderate handling wear with light nicks, dings and scratches scattered throughout, a few more moderate nicks and gouges, and there are repaired chip-losses to each side of the barrel tang in the top of the wrist. Almost all of these marks appear oiled-over. There are no cracks. The LOP measures 13 3/4″ from the front of the trigger to the back of the buttplate. The plate has a mustard patina with scattered nicks, scrapes and scratches. Overall, the stock is in about Very Good-plus condition as Antique.

Finish Originality: Based on the markings, we don’t believe the gun has been refinished, though it has undoubtedly seen cleaning and possibly polishing.

Bore Condition: The bore is gray. The rifling is sharp where not interrupted by erosion. There is minor erosion scattered through the bore with less frequent patches of minor pitting.

Overall Condition: The metal surfaces show cleaning, likely chemical based on the slightly frosted and mottled look of the barrel surfaces with scattered minor nicks, scratches, and evidence of minor surface erosion which has been scrubbed or chemically cleaned out. There is infrequent minor discoloration from oxidation. There is some more notable erosion around the nipple, but the nipple itself appears serviceable. The screw heads range from sharp to disfigured with useable slots. The markings are generally clear, the maker’s mark on the right of the stock is shallow and incomplete. Overall, this rifled musket is in about Very Good-plus condition as Antique

Mechanics: The action functions correctly. The nipple is intact. We have not fired this rifle. As with all used firearms, a thorough cleaning may be necessary to meet your maintenance standards.

Box, Paperwork & Accessories: This rifled musket comes with a snap-cap chained to the guard and a ramrod. The ramrod is steel with threads at one end and the ram-end having an integral jag and patch-slot. The ramrod and snap-cap show scattered discoloration from oxidation, but are intact and serviceable.

Our Assessment: With the outbreak of the American Civil War, both the Confederate and United States of America had an immediate and enormous need for more arms. Caleb Huse was selected as the purchasing agent for the Confederacy and set sail immediately to buy up all the arms he could find in England and continental Europe which could be of use to the war effort, hopefully also starving the competing Union purchasing agents of access to the same arms. Mere hours ahead of these competing agents, Huse set up purchase orders with the London Armoury Co., Royal Small Arms Factory Enfield, as well as a number of smaller arms makers in the London and Birmingham area to procure Pattern 1853 rifled muskets. The P-1853 muskets were used on both sides during the Civil War, but the larger number was purchased by the South. This example is a King & Phillips production rifle, one of the smaller Birmingham makers and has appropriate markings for a Confederate Enfield, including commercial-export British proofs, King & Phillips stock markings, Tower lock not marked for British military use, and Confederate JS-Anchor marking. The rifle is in about Very Good-plus overall condition with amazing mechanics and a quite nice bore for a nearly 160-year old rifle which survived the most destructive conflict in the history of America. While there were many thousands of these rifles purchased, there can’t be that many of these rifles that survived the Civil War and are still around today, making all of them collectible regardless of their condition. We think that this rifle will end up in a Civil War collection next to the 1861 Springfield musket and the various carbines in use during the war and its condition makes it a truly great example of one of the most popular Confederate rifles of the war. Please see our photos and good luck!