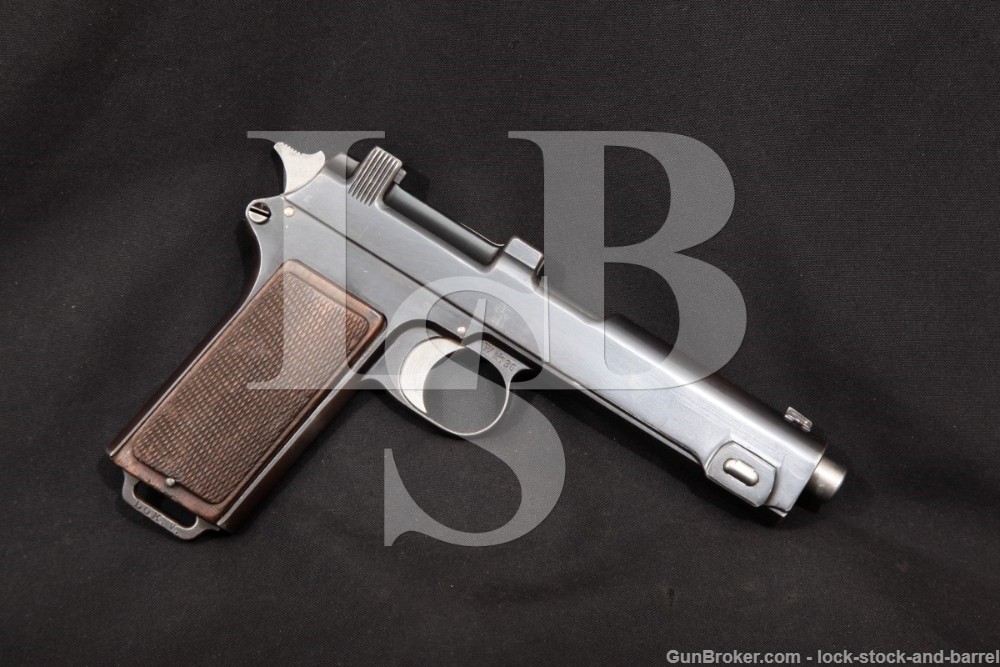 Year of Manufacture: The pistol was originally made in 1919, accepted into service with the Austrian Military Administration (Heeresverwaltung) in 1930, and rechambered to 9mm Parabellum in the 1940s.

Stock Configuration & Condition: The grips are two-piece checkered walnut panels wtih smooth borders. The grips show light-moderate handling wear with some discoloration from age and oil, a patch of smoothed checkers at the top of each panel, nicks at the bottom of each panel, and some scattered compressed checkers. The checkering is generally well defined. There are no cracks. Each panel has some play to the frame, more on the right than the left. Overall, the grips are in about Good-Very Good condition as likely not original to the gun.

Bore Condition: The bore is mostly bright and the rifling is sharp. There appears to be some very minor erosion in the bore, but this may prove to be stubborn fouling after a patient cleaning.

Overall Condition: This handgun retains about 87% of its current metal finish. The finish is thinning at most edges. There are patches of finish wear on the right of the slide over the trigger guard, on the frontstrap and on the trigger guard. There is light wear around the slide wedge on each side. There are some scattered minor nicks and scratches, some under the finish. There is infrequent and very minor discoloration from oxidation, most notable on the exposed portion of the barrel in front of the slide. The screw head is lightly tool marked with a strong slot. The pin head is unmarred. The markings are clear. Overall, this pistol is in about Very Good-plus condition.

Our Assessment: Borrowing features from both the Roth-Steyr 1907 and the Colt 1900-1911 series of pistols, the Steyr M1912 is a rotating-locking barrel, internal magazine semi-automatic pistol. The pistol is frequently referred to as the Steyr-Hahn or “Steyr Hammer” due to its external hammer. The pistol was an Austro-Hungarian sidearm during WWI with other contracts for sales to Chile and Romania. This example was still in Austrian military inventory in the 1940s when many were converted to 9mm Parabellum for use by Austrian police. The pistol was originally made in 1919 and was issued to both the Austrian Military Administration as well as the Austrian Federal Police in the Western state of Vorarlberg prior to being converted to 9mm for use by police under the administration of Nazi Germany. The pistol is in about Very Good-plus condition with 87% of its finish remaining, a nice bore and strong mechanics. This pistol is in really nice condition for having survived inter-war Austria, Anschluss and a world war, though it would likely not have seen any front-line action. There were only about 60,000 Steyr-Hahns converted to 9x19mm for police use, and far fewer are still in existence today. This rare variation should be a big hit with collectors of WWI and WWII pistols and those used by the Axis in particular, especially with its matching numbers. Please see our photos and good luck!