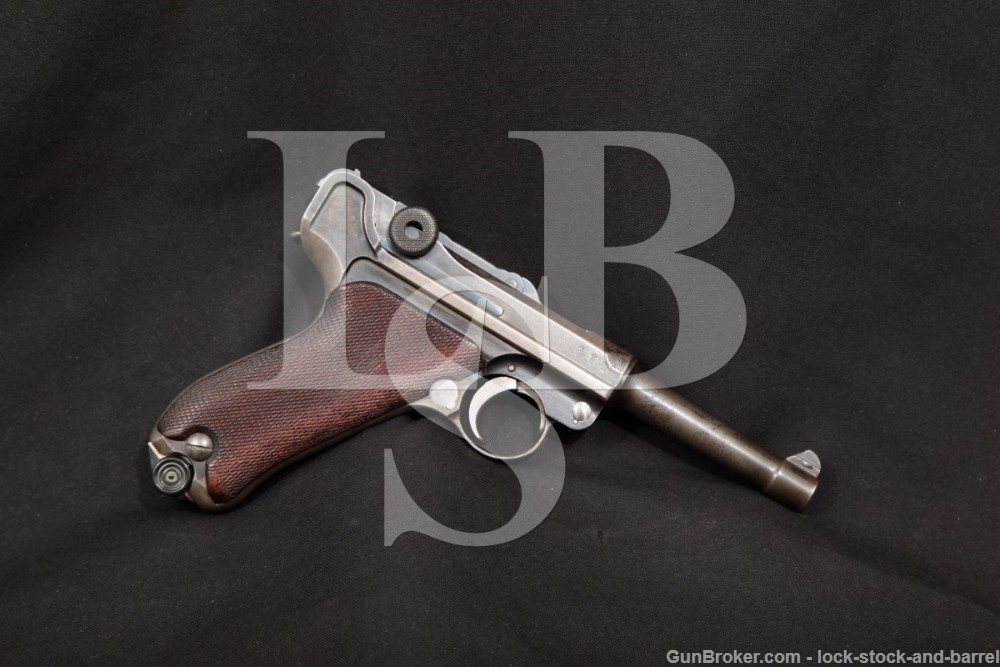 Sights / Optics: This pistol is mounted with a “V” notch in the back of the toggle and a serrated ramped blade front sight in a dovetail on the base on the front barrel band. The rear face of the base is also ramped and serrated.

Type of Finish: The finish is blued. The trigger, takedown lever and the right side of the magazine release have a straw color. The ejector and the pins holding the front and rear toggles have a fire blue finish.

Finish Originality: The sideplate has been refinished with cold blue. The remaining surfaces appear to be the original blued finish.

Bore Condition: The bore is dark with moderate to heavy wear in the rifling. There is light erosion scattered throughout the bore.

Overall Condition: This pistol retains about 25% of its metal finish. There is pinprick surface erosion scattered over the surfaces with larger spots of light erosion in the sideplate. There is finish loss over most of the surfaces with a plum colored patina developing, with a thinned finish in the remainder. There are a few tiny dings in the edges of the frame. The serrations and knurling on the toggle knobs show light to moderate wear. The safety serrations show moderate wear and the takedown lever and magazine release knurling show light wear. The grip screws are distressed. The markings are clear with the Eagle on the breechblock sharp. Overall, this pistol rates in about Good condition.

Box, Paperwork & Accessories: This pistol comes with a total of one magazine. The magazine has a light gray phosphate finish with a black plastic bottom piece. The body of the magazine shows very light wear. The bottom piece shows two small dings in the outer edges of the grasping ring on the right side. The magazine is in about Fine condition.

Our Assessment: The Luger (Pistole Parabellum or P-08) is perhaps the most aesthetically and ergonomically pleasing of all autoloading centerfire pistols. It is also one of the strongest, most accurate and most recognizable service pistols ever made. Georg Luger developed his famous pistol in 1898-1899 (starting with the Borchardt/Luger transitional pistol). The Luger is, essentially, a much improved Borchardt type pistol, which was itself based on the toggle action concept used by Sir Hiram Maxim in the world’s first practical machine gun. The Maxim shot its way to bloody fame in World War One, which also became the combat proving ground for the Luger Pistol. The Luger was so well liked and reliable that it was still being made and issued to German troops well after the P38 was adopted by the army. This is a DWM Military 1908 Third Issue made in 1911. The Third Issue pistols differed from the first two in that they had dated chambers and different inspection marks. This pistol has a Bavarian unit marking on its front strap and matching serial numbers on the metal parts. The receiver is tight to the frame and the pistol is in great mechanical condition except that the action does not lock open on an empty magazine. The pistol is in about Good condition with about 25% of its finish remaining. The bore is dark with moderate to heavy wear in the rifling and light erosion scattered throughout the bore. The pistol is unique in one regard: the unit number on its front strap is exactly the same as one of those shown in Jan. C. Stills book “Imperial Lugers”. This is a nice find for Luger collectors and those with an interest in German military arms as used in WWI and WWII.