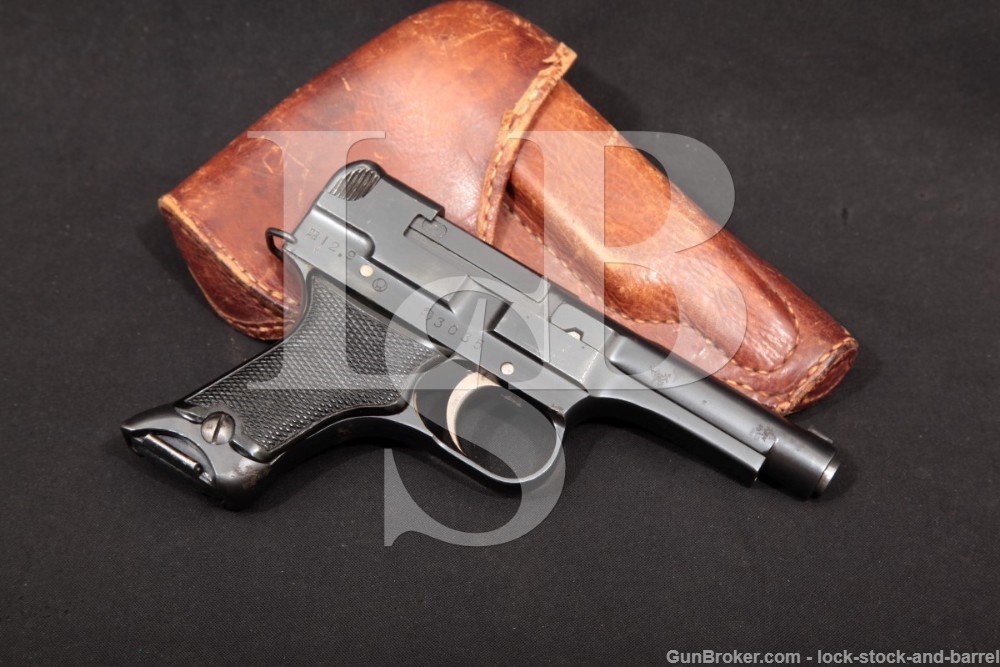 Markings: The left side of the frame above the trigger has 3 Japanese characters (model designation) with rounded corners as produced at Chuo Kogyo. The right side of the frame is marked with the character Sho and the date “12.9” indicating the 12th year 9th month of Hirohito’s reign, or Sept. 1944, over a small inspection mark. This is followed by a Nagoya Arsenal upside down “8” in a circle followed by the Japanese character for “Nam” (for Lt. Gen Kijiro Nambu, one of the founders of the Nambu Rifle Manufacturing Company, the predecessor to Chuo Kogyo.) and the serial number “3035”. This is also a tiny Japanese character on the right side of the trigger and two numbers on the left side which are blocked by the frame.

Stock Configuration & Condition: The grips are checkered black hard rubber (this is the correct type grip for pistols made before July 1944.). There are tiny dings in the smooth borders of the left grip, light handling marks in the borders of the right grip, and tool marks around the left grip screw. The checkering shows moderate wear with a few tiny mars. The grips rate in about Very Good Plus overall condition.

Type of Finish: The pistol has a dull blued finish with a straw-colored trigger.

Overall Condition: This pistol retains about 90% of its metal finish. There are spots of moderate to heavy erosion scattered over the right side of the slide, the right front corner of the frame, the front strap, backstrap and the rear of the frame. There is thinning at the front of the slide and on its edges, with streaks of thinning in the top of the slide behind the port and finish loss on the edge of the safety. There are also a few light handling marks in the finish. There are two tiny punch marks on each side of the frame (under the finish) that hold the large “D” shaped plates in position. The slide serrations are sharp. The right grip screw is disfigured and the markings are crisp. Overall, this handgun rates in about Fine condition.

Mechanics: The action functions correctly. The slide is tight to the frame. The safety is pushed up for safe and down for fire. We did not fire this handgun. As with all used firearms, a thorough cleaning may be necessary to meet your maintenance standards.

Box, Paperwork & Accessories: The pistol comes with a single blued magazine and a brown pigskin holster. The magazine is marked on the bottom of the spine with a punch mark, a tiny two Japanese character”9 95”. The body shows light wear and the floorplate shows thinning and small handling marks. It is in about Fine condition. The holster is made from a single piece of pigskin that is folded over at the front and sewn around the muzzle and the rear edge. A leather hinge is sewn to the top rear of the holster, to which a top flap is attached. The flap has a separate piece sewn to the heel which protects the grip frame of the gun. The top flap is secured to the outside of the holster with a brass snap. There is a single wide belt loop sewn to the back of the holster along with two blued “D” rings for attaching to a harness. The inside of the top flap is marked with six Japanese symbols. There is verdigris growing around the brass snap and spots of oil staining in the top flap and belt loop. The stitching is all intact but the leather trim around the edges of the top flap is frayed. There are spots of oil staining, scratches and scuff marks scattered over the surfaces. The holster is in about Good overall condition.

Our Assessment: The Type 94 Nambu is an odd-looking pistol but was popular with the Japanese troops because it was smaller and lighter than the Type 14. It was issued to tankers, pilots and others who had to work in cramped quarters. It was originally designed as a military sidearm, and never intended for civilian sales. Like other Nambu pistols, it is chambered for 8mm Nambu. This pistol was made by the Chuo Kogyo company under the supervision of the Nagoya Arsenal in 1937, the 2nd year this model was made. This pistol comes with an early pigskin holster. The serial numbers on the pistol are matching, but the magazine is from a different pistol. This pistol is in about Fine condition with about 90% of its original finish remaining. The bore is bright with sharp rifling and no erosion. This pistol should be a big hit with the collectors of Japanese weaponry and military weapons used in WWII.