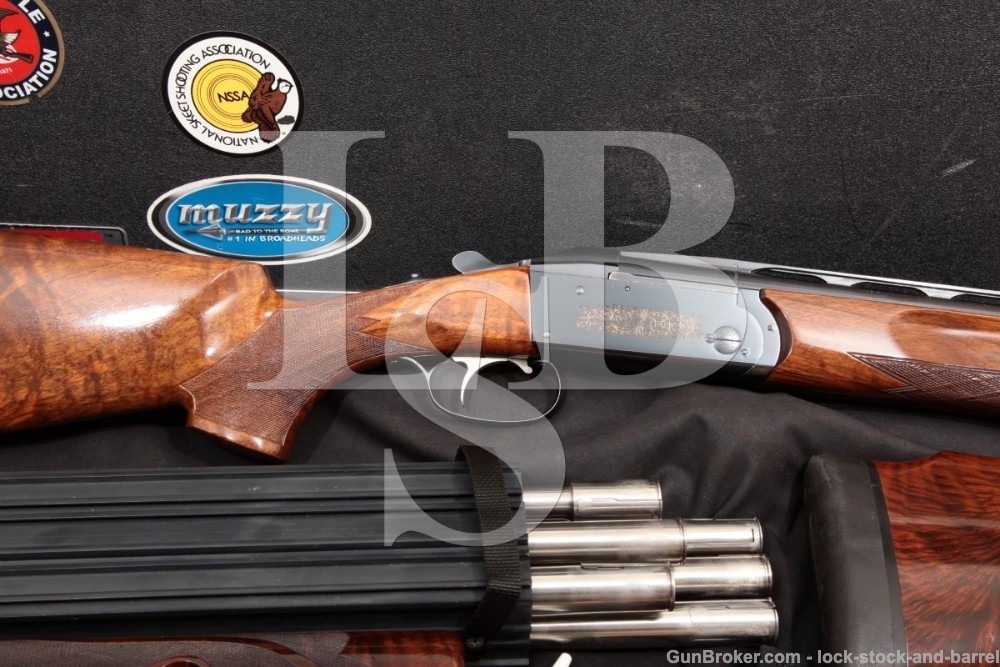 Year of Manufacture: Ca. 1970 (the barrels have a 1970 date code with serial number about 400 later than the receiver)

Barrel Length: 28”, Vent Rib, the barrels have been ported. The 20 gauge tubes are also ported.

Choke: Our gauge reads Cylinder over Improved Cylinder, Fixed. There are dents at the muzzle of the bottom barrel which probably show more constriction on our gauge than is really present.

Sights / Optics: There is a white bead in a base at the front and a smaller silver-colored mid-bead. The top of the rib is finely serrated for glare reduction.

Stock Configuration & Condition: The installed stocks are two-piece checkered walnut with finger-grooved, skip-line checkered forend, standard and finer checkered pistol grip, monte-carlo comb, and ventilated black rubber Pachmayr White Line recoil pad. The right of the grip has a palm-swell and the stock is cast slightly off for a right-handed shooter. The forend has a nick on the top-left edge and there are a few other scattered minor marks. The checkering has minor handling wear, generally sharp. There are no chips or cracks. The drop at the front and rear of the comb is approximately 1 3/8″, drop at heel 1 3/4″. The LOP measures 14 1/2″ from the front of the trigger to the back of the pad, 13 3/8″ to the back of the wood. Overall, the installed stocks are in about Fine condition as not original to the gun or to each other.

Also included is an additional stock set. The inside of the forend has “UNDERWOOD” hand-written and the grip cap is marked “BRENT UMBERGER / MASTER STOCKMAKER”. The additional stock set is checkered and carved select walnut with beavertail forend, capped pistol grip, monte-carlo comb and solid black rubber Kick-Eez buttpad. The extra stocks have some scattered light scratches and thinning finish at edges. The checkering is sharp. There are no chips or cracks. We did not install the additional stocks for proper LOP and drop measurements, but they appear to be close to those installed. Overall, the additional stocks are in about Very Good-Fine condition as not original to the gun.

Overall Condition: This shotgun retains about 95% of its metal finish. The finish is thinning at a few edges, most notable on the shoulders of the barrel at the breech. The barrels have infrequent minor wear, most notable under the forend, concealed while assembled. There is a band of gold leaf at the muzzles which is coming loose on the right side. The receiver has some scattered light marks on the bottom and right. The lever and safety show light handling wear. The screw heads are lightly tool marked with strong slots. The pin heads are unmarred. The markings are clear. The sub-gauge tubes show normal light use-wear. Overall, this shotgun is in about Very Good condition as not parts original (see Mechanics)

Mechanics: The safety appears to be frozen, we were not able to engage it. Otherwise, the action functions correctly. The barrels lock to the receiver with no play. The trigger is crisp. We have not fired this shotgun. As with all used firearms, a thorough cleaning may be necessary to meet your maintenance standards.

Box, Paperwork & Accessories: This shotgun comes in a hard-sided aluminum Americase with combination-lock latch and two key-lock latch (we do not know the combination and no keys are included). The interior of the case has compartments for two stocked receiver asssemblies (only one receiver included), two forends, two barrel assemblies (only one barrel set included), the sub-gauge tubes in their black plastic carry case and various other accessories, included a mallet, black synthetic tube-pusher, t-handle stock tool, snap-on hook tool, one tube of K Gun Glide and one tube of Tetra Gun Grease. The exterior of the case shows scattered light scratches, scrapes and general storage and handling wear. The interior has light wear from the contents. The accessories show normal use-wear with the tubes clearly not full. Overall, the case is in about Good-Very Good condition as missing keys and combo. The accessories are in about Very Good condition.

Our Assessment: The Remington 32 was discontinued shortly after WWII and their patents on the design not renewed. Henrich Krieghoff, having recently escaped Soviet-controlled East Germany had settled in Ulm and started making sporting arms. He was able to receive approval from Remington to utilize their design and the Krieghoff 32 was born! It would go on to be considered one of the finest sporting shotguns available, and with good reason. This example was produced around 1970, with the barrels and forend iron coming from a slightly later produced gun, two sets of new stocks and a nice set of sub-gauge tubes which allows the user to fire 12 gauge, 20 gauge, 28 gauge and .410 from the same gun just be removing or inserting the tubes. The whole set comes in a nice Americase fit for the gun and its accessories. This should make a nice all-around sporting gun for the lucky winner. Please see our photos and good luck!