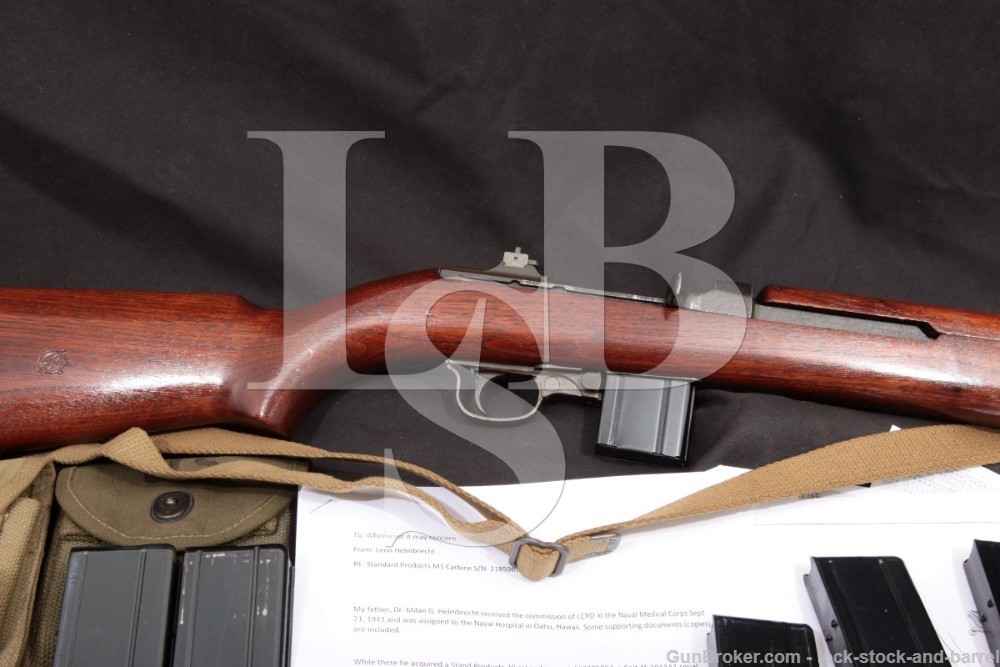 Sights / Optics: The front sight is a post set between two protective wings. The Type I rear sight is a  flip up dual aperture assembly.

Stock Configuration & Condition: The two piece hardwood stock has a pistol grip, Type IA barrel band with sling loop, sling well, sling pass through and a metal buttplate. The buttplate shows light scrapes & small scratches. The left side of the stock & handguard show scratches & compression marks that have damaged the surface wood. The wood shows some other scrapes & scratches. These marks have been oiled over. The recoil plate has been treated with cold blue; it shows discoloration. The LOP measures 13 1/4 inches from the front of the trigger to the back of the buttplate. The stock rates in about Very Good Plus to Fine overall condition.

Bore Condition: The bore is bright; semi bright at the muzzle. The rifling is shrap. There is no erosion. The bore shows an M.E. of 1.

Overall Condition: This rifle retains about 95% of its metal finish as refinished. The top of the barrel shows a small band of discoloration from oxidation. The barrel also shows light scrapes. The receiver and operating slide show scrapes and some discoloration from oxidation. The front of the receiver and the charging handle portion of the operating slide show some surface erosion. The right side of the receiver shows some thinning consistent with cycling. The screw heads are intact. The markings on the barrel are crisp. The markings on the receiver are deep. Overall, this rifle rates in about Very Good Plus condition.

Box, Paperwork& Accessories: The rifle comes with 8 magazines, a sling, and 2 reproduction canvas dual magazine pouches. The two 10 round magazines show scuffs & light handling marks. They are in about Fine condition. The six 15 round magazines show scrapes & scratches. They are in about Very Good Plus condition. The sling shows light scrapes & light oxidation on the metal as well as light soiling on the canvas. It is in about Very Good Plus to Fine condition. One of the reproduction Type I dual magazine pouches is in about Fine condition. The other shows some light soiling and is in about Very Good Plus condition.
The 15 round magazines are not available to residents of California or any jurisdiction with magazine capacity restrictions.
The rifle comes with paperwork documenting the ownership of this M1 Carbine. Lieutenant Commander Milan G. Helbrecht served in the Naval Medical Corps in Oahu, Hawaii during WWII. There he acquired the Standard Products M1 Carbine listed in this auction. He took this M1 Carbine back home at the end of WWII where it remained with his family until now. LCRD Helbrecht’s son provided copies of paperwork  & copies of photos documenting Lieutenant Commander Milan G. Helbrecht’s service during WWII. The copies included an Honorable Discharge Certificate, newspaper clippings of LCDR Helbrecht’s service, and a notarized letter from LCRD Helbrecht’s son. Please see photos.

Our Assessment: This Standard Products M1 Carbine was built in early 1944. It is in nice shape with great markings on the metal and a strong bright bore. This M1 Carbine comes with 8 magazines, a sling, and 2 canvas magazine pouches.

According to our consignor this M1 carbine was acquired during WWII by Lieutenant Commander Milan G. Helbrecht who served in the Naval Medical Corps on Oahu, Hawaii during the war. It has been kept in the family since it was brought home from Hawaii at the end of WWII. The rifle comes with paperwork documenting LCRD Helbrecht’s Military service.
This is M1 Carbine has some history to it and will add to a Military or WWII collection.