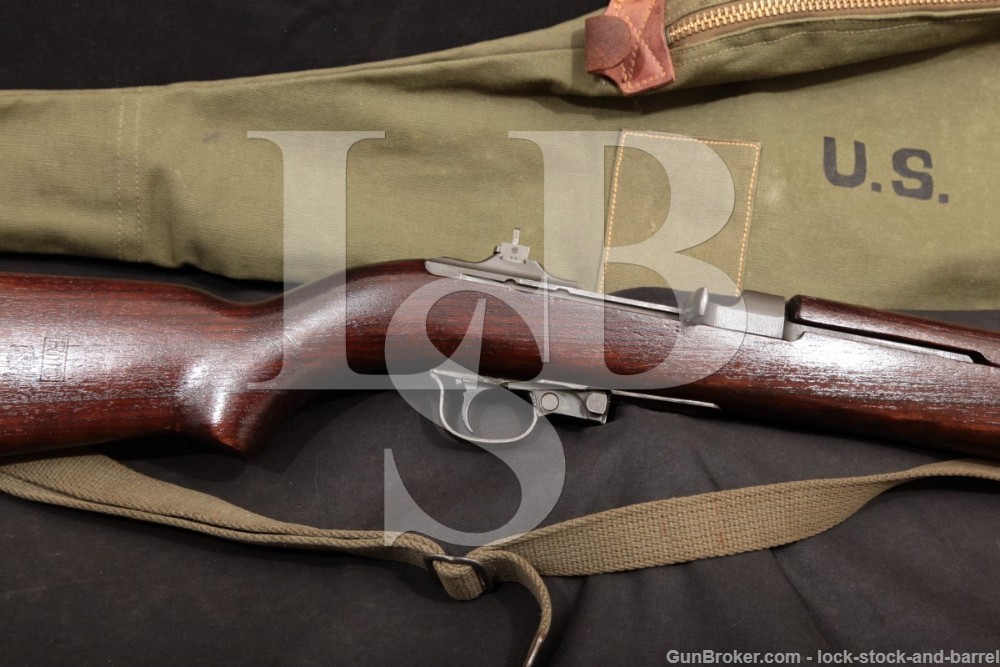 Sights / Optics: The front sight is a post set between two protective wings. The Type I rear sight is a flip up dual aperture assembly.

Stock Configuration & Condition: The two piece hardwood stock has a pistol grip, Type I barrel band with sling loop, sling well, sling pass through and a metal buttplate. The buttplate shows light scrapes, discoloration from oxidation, and apatch of light surface erosion. The wood shows scrapes & light scratches which have been oiled over. The LOP measures 13 1/4 inches from the front of the trigger to the back of the buttplate. The stock rates in about Very Good Plus to Fine overall condition.

Overall Condition: This rifle retains about 70% of its metal finish. The barrel (from the gas piston forward) has lost most of its finish to cleaning. It shows scrapes and a freckling of discoloration from oxidation. The right side of the receiver shows thinning consistent with cycling. The remaining metal shows scuffs and light handling marks. The screw heads show light use. Most of the markings are deep. The barrel markings are light. Overall, this rifle rates in about Very Good Plus condition.

Box, Paperwork& Accessories: The rifle comes with a green canvas carrying case and a green canvas sling. The sling shows scrapes on the metal as well as a small amount of light fading on the canvas. It is in about Very Good Plus to Fine condition. The carrying case shows areas of light soiling, fading, and light fraying on the canvas. The canvas zipper pull strap is missing. The leather at each end of the zipper shows scrapes & discoloration. Overall the carrying case is in about Very Good Plus condition.

Our Assessment: This Rare All Matching Rock-Ola M1 Carbine was built back in 1944. It has lots of “ROCK-OLA” markings on the metal parts including the receiver, barrel,  gas piston housing, operating slide, trigger group, bolt, and recoil plate. The remaining metal parts, including the extractor and sights, are coded to Rock-Ola. The stock is also coded to Rock-Ola and has a nice large Rock-Ola cartouche on the butt. Rock-Ola M1 Carbines are hard to find as they produced far fewer M1 Carbines that most manufacturers. An All Matching Rock-Ola is a Rare find that will be envied by collectors.

Here is some history on the Rock-Ola company from m1family.com/topic16.html: “The Rock-Ola Manufacturing Corporation was, along with Wurlitzer, a top maker of jukeboxes. The company, which originally made slot machines, scales and pinball machines, was founded in 1927 by Coin-Op pioneer David Cullen Rockola…During the 1920s, Rockola was linked with Chicago organized crime and escaped a jail sentence by turning State’s Evidence. Starting in 1935, Rock-Ola sold more than 400,000 jukeboxes under the Rock-Ola brand name, which predated the rock and roll era by two decades, and is thought to have inspired the term…Rock-Ola was also one of the producers of the M1 carbine for the US Military during WWII, making 3.7% of the 6,221,220 made. Due to both the relative rarity of Rock-Ola carbines and the distinctive name, they are highly prized among collectors.”