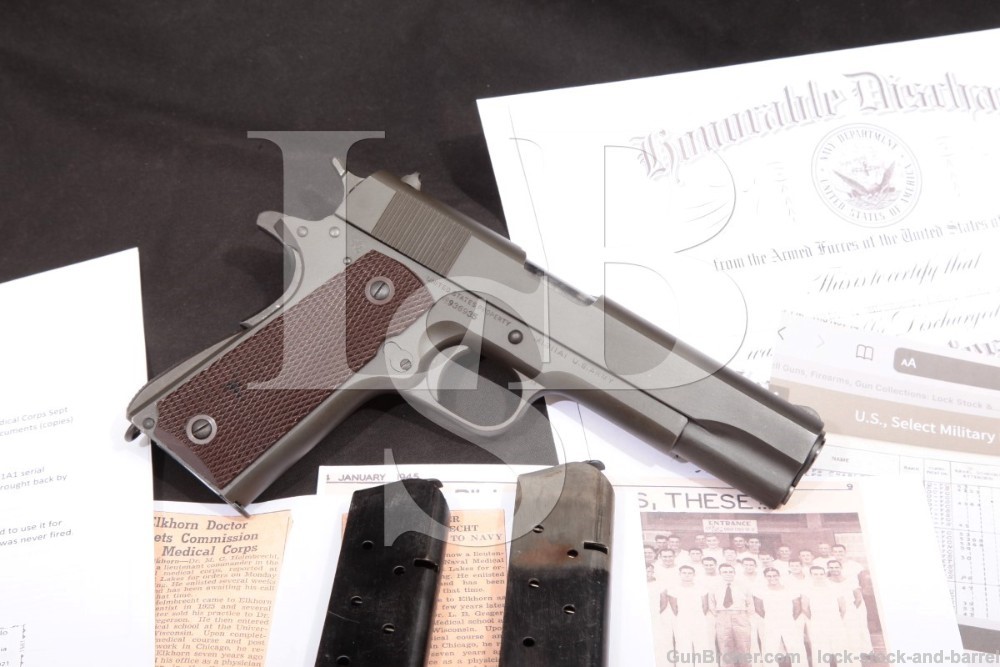 Stock Configuration & Condition: The grips are checkered brown “Coltwood” plastic with large reinforcement rings around the grip screws and reinforcement ribs on the inside (Type 7 as identified in “U.S. Pistols & Revolvers 1909-1945”, J.C. Harrison, p7). The grips have minor handling wear with only a few minor marks. There are no chips or cracks. The checkering is sharp. Overall, the grips are in about Excellent condition.

Bore Condition: The bore is mostly bright with sharp rifling. There appears to be some minor erosion in the grooves, but most or all of this will likely prove to be stubborn fouling after a patient cleaning.

Overall Condition: This pistol retains about 96% of its metal finish. The balance of the finish is nearly all in operational wear, visible on the slide forward of the dust cover, the barrel, trigger, grip safety and hammer. There is a very light “idiot mark” under the slide stop, minor handling wear on the controls, and a few other light handling marks. The screw heads are sharp. The markings are clear. Overall, this pistol is in about Fine condition.

Mechanics: The action functions correctly. The trigger pull is crisp. There is a very little play between the slide and frame and the slide moves smoothly on the frame. This pistol has manual and grip safeties. We have not fired this pistol. As with all used firearms, a thorough cleaning may be necessary to meet your maintenance standards.

Box, Paperwork & Accessories: This pistol comes with a total of three 7-round magazines, a notarized letter from the consigner stating that this pistol is from the personal collection of LCDR M.G. Helmbrecht, an officer in the Naval Medical Corps assigned to the Naval Hospital in Oahu, HI as well as some supporting documents including photos, newspaper clippings and a copy of Helmbrecht’s Honorable Discharge certificate. Two magazines are full blue, one is in the white in the top half. The magazines show light operational wear, intact feed lips and strong springs, in about Very Good-plus condition.

Our Assessment: The 1911 and 1911-A1 pistols served the military of the United States from 1911 to 1985, through two World Wars and the Korean and Vietnam wars. They gained a reputation as a reliable handgun with plenty of stopping power, and are held in high regard by those who have used them. This is a Colt manufactured 1911-A1 pistol  in Fine condition with serial-matching slide and frame and appearing to have all correct parts. It retains around 96% of its original finish with a nice bore and strong mechanics. It also comes with documentation of one of its previous owners, a Lieutenant Commander in the Naval Medical Corps who was assigned to Hawaii during WWII. Oahu being the island where Pearl Harbor is located, LCDR Helmbrecht would increasingly be at the center of medical care for the troops in the Pacific theater as island after island was taken by Japan. This Colt would make a great addition to any collection just based on its condition, but it also has a neat story behind it which will be of interest to WWII collectors. Please see our photos and good luck!