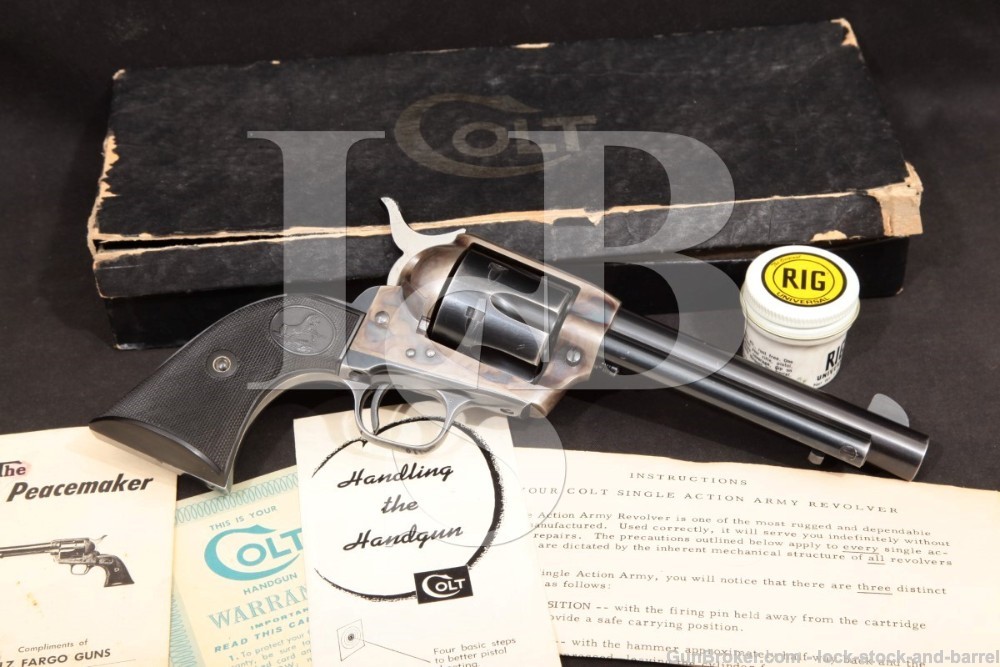 Stock Configuration & Condition: The grips are two-piece checkered black rubber panels with rampant colt in oval at their tops. The grips show minor handling wear with only a few scattered minor marks. The checkering is sharp and there is good detail in the rampant colts. There are no chips or cracks. Overall, the grips are in about Excellent condition.

Overall Condition: This revolver retains about 90% of its metal finish. The finish is thinning at most edges. The barrel has finish wear on the left at the muzzle and some scattered minor marks. The ejector rod housing has a spot of wear at the front edge and a few minor marks. The frame’s case-coloring is still generally strong with some faint spots of surface oxidation on the left behind the recoil shield and on the right below the cylinder. The grip straps show very light handling wear. The cylinder has a thin turn-line and some scattered minor marks and scuffs. The unfinished sides of the hammer have light operational wear and a few tiny spots of surface oxidation. The screw heads range from sharp to tool marked with strong slots. The markings are clear. Overall, this revolver rates in about Very Good-plus condition.

Mechanics: The action functions correctly. The cylinder lockup is very tight with only barely perceptible play. The trigger pull is crisp. We did not fire this revolver. As with all used firearms, a thorough cleaning may be necessary to meet your maintenance requirements

Box, Paperwork & Accessories: This revolver comes in a black cardboard Colt box with green interior and “7018” hand-written on the bottom with an assortment of factory paperwork including manual and a small jar of Rig Universal gun grease. The box has tears on the lid with a piece missing from one end, fraying at edges and corners and general storage wear, in about Good condition.

Our Assessment: Production of Single Action Army revolvers was halted at the outset of World War II to free up machines and manpower for filling wartime orders. After the war, Colt decided not to bring the iconic revolver back into production as it was seen as obsolete. The advent of swing-out cylinder revovlers and reliable semi-automatic pistols, they thought, meant that there was no place in the market for the antiquated single action revolver. Then, with the advent of television and western programs such as Hopalong Cassidy, The Lone Ranger, The Cisco Kid, and The Gene Autry Show, American interest in the guns that won the west was reborn. In 1956, Colt reintroduced the Single Action Army, this new production run now referred to as the 2nd Generation SAA’s, and this example comes from that first year of production. It is in Very Good-plus condition with a great bore, strong mechanics and wear consistent with handling and light use over the past 60+ years. The gun comes in what appears to be its original box with the serial number hand-written on the bottom as boxes of this era would have. This would make a great addition to a Colt collection as one of the earliest of the second generation. Please see our photos and good luck!