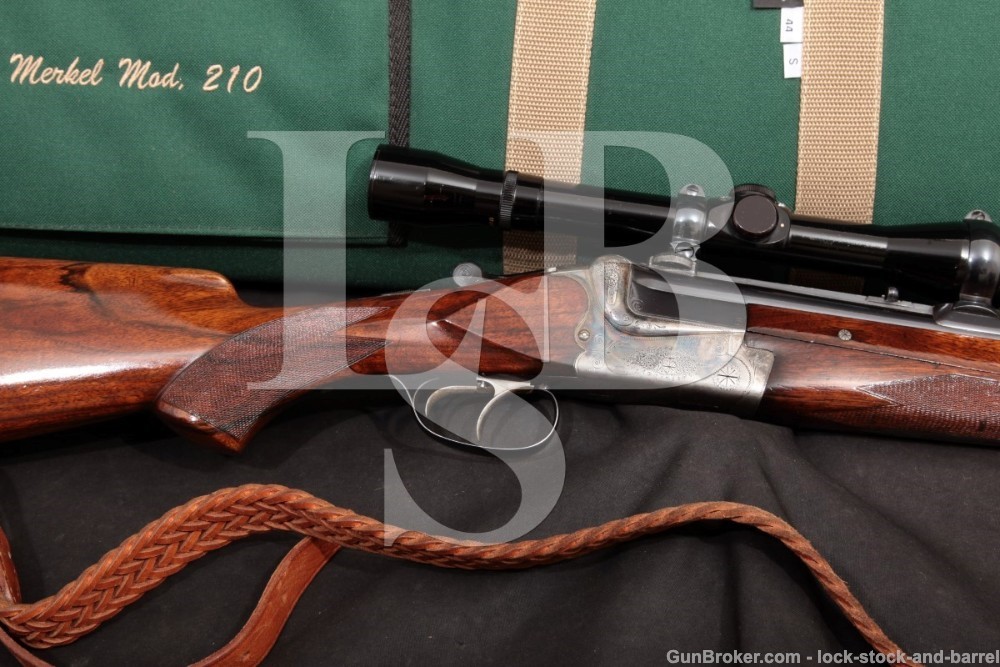 Markings: The left of the barrels is marked “GEBRUDER MERKEL / SUHL” on the shoulder at the chamber. The bottom of the rifle barrel is import marked “Blackbern Williamsburg VA” in front of the forend lug (concealed when assembled) and behind the lug is “45921 / 12 . 6.5x57R”, “BOHLER STAHL” with a “GM” monogram in shield between the two words, “Weichlot” (solder), crowned “G”, German eagle, and “KJ”. The bottom-left of the monoblock is marked with a German eagle, crowned “U”, crowned “N”, “857” (date code) and Suhl proof house mark. The left of the barrel lug has a “1Q” monogram over “00474” (outstanding quality mark), the bottom of the lug has “TG / 3” in triangle. The rear face of the shotgun extractor is marked “70” (70mm, 2 3/4″). The inside of the forend iron is marked “45921” and with a “GM” monogram in shield. The left shoulder of the receiver is marked “45921”, the right with crowned “U” and German eagle. the standing breech-face is marked with a “GM” monogram in shield. The bottom of the receiver is marked “GEBRUDER MERKEL / SUHL”. The receiver, guard and exposed portion of the forend iron have scroll and border engraving. The eyepiece of the scope is marked “GERMANY / PECAR / BERLIN / 4×81 / Light” and on the bottom with “17484”.

Sights / Optics: The front sight is a brass beaded blade in-line dovetailed to the front of the rib. The rear sight is a folding sight which presents a flat-top “U”-notch in one position and a wide “U”-notch in the other with the base dovetailed to the rib between the scope bases. The front scope base is dovetailed to a boss over the forend and the rear is fixed to the rear of the barrel over the chamber. Bases are cut for the claw-type rings holding the scope with the rear having a slider allowing the scope to be detached from the bases for use of the iron sights. The installed scope is a 4x (the 81 in this scope’s designation indicates 81% light transfer, not objective size) Pecar scope with German post reticle. The scope body has scattered minor wear and the glass is fairly clear, in about Very Good-plus condition.

Stock Configuration & Condition: The stocks are four-piece walnut with two smooth, fixed forend pieces, one on each side, checkered removable forend, checkered pistol grip, straight comb with European-style cheekpiece, serrated black plastic Gebruder Merkel Suhl buttplate and a sling swivel in the belly (the other is mounted to the bottom barrel forward of the forend). The stocks show light handling wear with some scattered minor compressions, a nick on each of the fixed forend pieces in front of and above the front mounting screws, and a few other scattered light marks, most notable on the toe-line behind the rear sling swivel. There is a very short, thin grain-line crack at the rear of the top tang. There are no chips. The checkering is well defined. The LOP measures 14 3/8″ and 13 3/8″ from the fronts of the triggers to the back of the buttplate. The plate shows minor wear including a couple of very light tool marks at the mounting screws. Overall, the stocks are in about Fine condition.

Bore Condition: The bores are bright. The rifle barrel’s rifling is sharp. There is no erosion in either bore, but there is some stubborn wad plastic in the shotgun bore in front of the chamber.

Overall Condition: This combination gun retains about 90% of its metal finish. The finish is thinning at some edges, most notable in the receiver. The barrels have a few scattered minor marks with light wear from the forend which is concealed when assembled. The edges of the rib have some scattered minor nicks. The receiver shows handling wear on the bottom and on the top tang, some rubbing on the sculpted fences, but otherwise still shows strong coloring. The guard has strong finish with only minor marks. The screw heads are sharp and appear to be timed correctly. The markings are clear. Overall, this combination gun is in about Fine condition.

Mechanics: The action functions correctly. The barrels lock up with no play to the receiver. The front trigger (rifle) can be pushed forward to set it, resulting in a light pull with a smooth takup followed by a crisp break. The rifle barrel’s cocking indicator is on the right, the shotgun on the left. The safety engages automatically when the lever is pressed. We have not fired this gun. As with all used firearms, a thorough cleaning may be necessary to meet your maintenance standards.

Box, Paperwork & Accessories: This shotgun comes with the installed scope as described, a brown braided leather sling and a green and tan nylon AMS zipper case with “Merkel Mod. 210” embroidered on its zipper accessory pocket. The sling shows light use-wear, in about Very Good-plus condition. The case has minor storage wear, in about Fine-Excellent condition.

Our Assessment: The name Merkel has been around in Suhl for more than 200 years, with several different “Merkels” being known for making high quality sporting arms. Gebrüder Merkel, today known as Merkel Jagd und Sportwaffen, is the only one which has stood the test of time. Surviving two world wars, Soviet occupation and the East German state, it is still around to this day! This combination gun was made post-World War II in Suhl under the East German government, but before the construction of the Berlin Wall. It is chambered for 12 gauge shells in the top barrel and 6.5x57mmR on the bottom. Able to take game and fowl, it makes for a great all-purpose gun to take on a hunt with the 6.5×57 cartridge a popular European sporting round which takes advantage of the excellent ballistics of the 6.5mm projectile and combines it with a rim for extraction on top-break rifles such as this one. It is interesting that such a high quality sporting arm would come out of a socialist nation in the midst of the Cold War, but it has since been rescued and brought to America. This example is in about Fine condition with only normal handling wear, appearing to have spent its life in the care of responsible sportsmen. It is a beautiful piece that would be perfect for any sportsman who can appreciate its mix of beauty, versatility, and quality. Please see our photos and good luck!