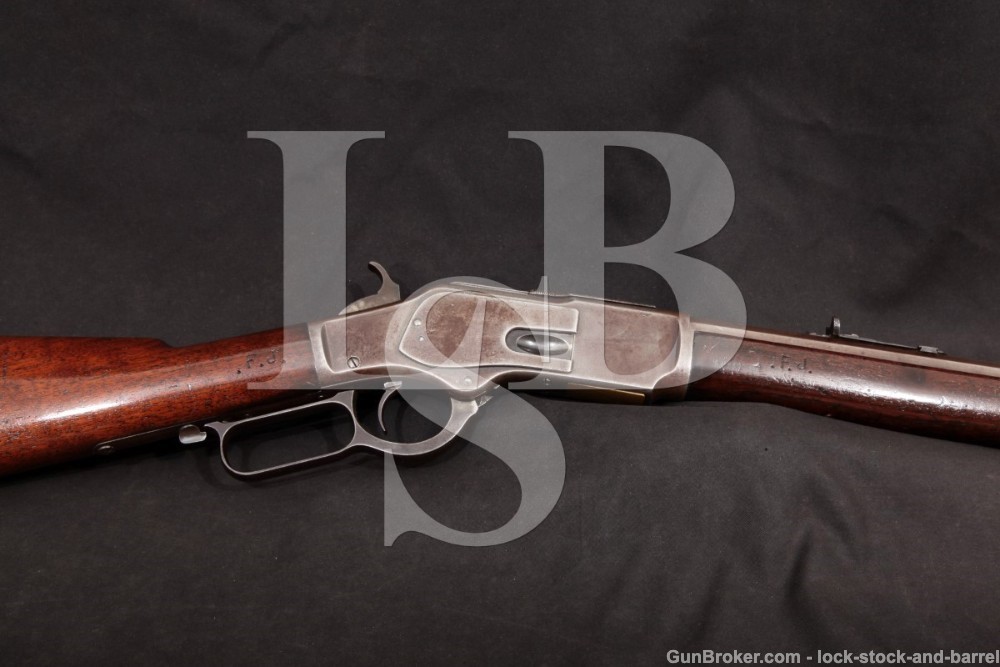 Stock Configuration & Condition: The stocks are two-piece smooth walnut with capped forend, straight grip and crescent buttplate with a sliding door in front of a storage compartment in the butt. The stocks have light-moderate handling wear with several scattered light scratches, scuffs, nicks and dings, a few more moderate compressions, and the personalized markings noted in the Markings section. The left forend marking has four punch marks above it, appearing to be applied intentionally. The forend has a small loss at the rear edge on the left. The forend has a thin crack at the nosecap on the bottom and the wrist has a short, thin crack at the front edge on the left. The LOP measures 12 5/8″ from the front of the trigger to the back of the buttplate. The plate has mottled patina with light wear. The wood is alternately proud and shy to the metal, possibly refinished but likely not since the markings were applied.

Finish Originality: Remaining finish is Original, the bore has been sleeved.

Bore Condition: The bore has been sleeved. The bore is mostly bright with sharp rifling. There is very faint erosion near the muzzle.

Overall Condition: This rifle retains about 3% of its metal finish. Remaining finish is only in protected areas such as around the sideplates, on the loading gate and around the trigger on the bottom tang. Most metal surfaces have mostly worn to gray with a mottled light patina. There is infrequent scattered minor surface erosion, most notable on the right of the barrel about 12″ from the muzzle. There are scattered light scratches, nicks and dings, with what appears to be two punch marks on the right barrel flat near the muzzle and tool marks around most screw heads. The left sideplate has an odd rivet near the front, we don’t see that it serves any purpose. The stock mounting screw on the bottom tang sits quite proud to the tang and is likely a replacement. The screw heads are mostly sharp or tool marked with strong slots, the front tang-sight fill screw is disfigured with a questionably useable slot. The markings are mostly clear, worn, but legible. Overall, this rifle is in about Good condition as Antique.

Mechanics: The action functions correctly, however the magazine tube is only finger-tight to the frame. We have not fired this rifle. There is a lever lock on the lower tang, and a dust cover on the receiver that slides on an integral rail typical of the Third Models. As with all used firearms, a thorough cleaning may be necessary to meet your maintenance standards.

Our Assessment: One of the most successful, and certainly one of the most famous Winchester rifles was the Winchester Model 1873, known as “The Gun that Won the West” for its predominant role in the hands of Western settlers. The Model 1873 had a steel frame that was much stronger than the brass framed Model 1866, allowing Winchester to develop a family of powerful new cartridges, with Colt usually producing Single Action Army revolvers in the same calibers shortly after they were developed. The .44-40 Win. cartridge, also known as the .44 WCF, was introduced by Winchester in 1873 as Winchester’s first metallic centerfire cartridge with a number of WCF cartridges to follow. Colt produced single action revolvers chambered for the Winchester cartridges as well, allowing users to have a rifle and handgun which shared the same ammunition. The rifle is in about Good overall condition, appearing to have had a very useful life. The barrel has been re-lined, leaving it with great rifling and only a hint of erosion near the muzzle. In addition to personalizing the stocks with their initials, a previous owner appears to have installed a rivet on the left sideplate, the purpose of which is a mystery. After having its bore sleeved, this rifle could well spend the next century in the field or on the range, but we suspect it will find a home in a collection somewhere. It deserves a spot in a collection of lever action rifles next to its 1866, 1876, 1892 and 1894 cousins. Please see our photos and good luck!