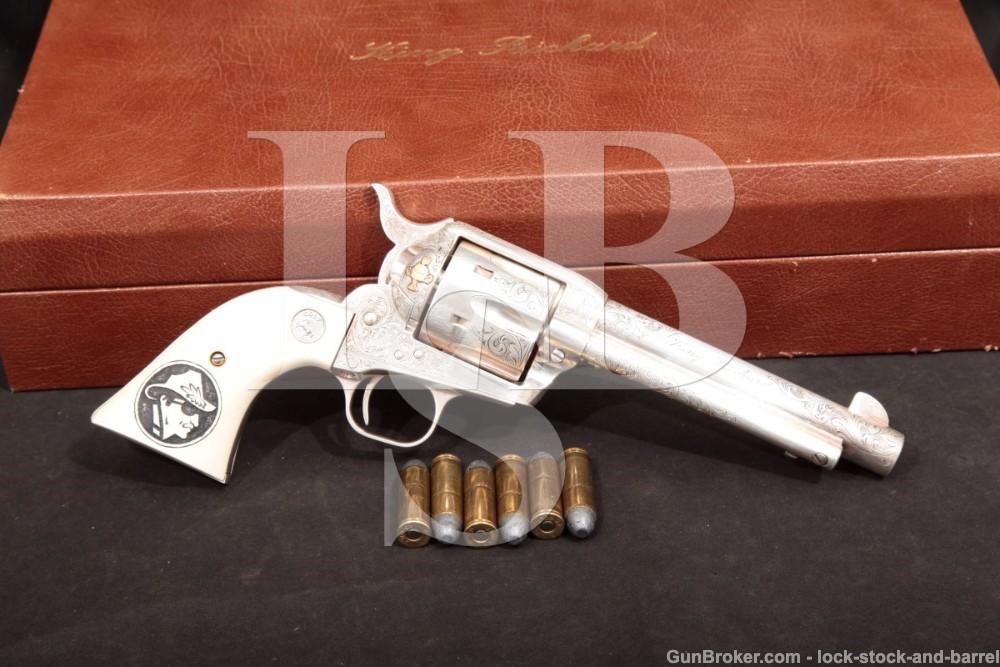 Markings: The left of the barrel is hand-engraved “THE Richard Petty SPECIAL” and with the STP #43 car at the muzzle, the top is marked “COLT’S PT. F.A. MFG. Co. HARTFORD CT. U.S.A.”, the right is hand-engraved “King Richard”. The left of the frame is marked “PAT. SEPT. 19, 1871 / JULY 2, 72 JAN. 19, 75” and with a rampant colt. The left of the trigger guard has the “VP” proof and “O”. The bottom of the frame in front of the trigger guard is marked “RP-90 / S02223A”. The left of each portion of the grip frame, under the grip, is marked “S02223A”. The rear of the loading gate is marked “223”. The inside of each grip panel has a non-matching serial number hand-written. The front face of the cylinder is marked “223”, the rear is marked “45”. The left-rear of the recoil shield has a sculpted gold bust of Richard Petty, the outside of the loading gate has a sculpted gold trophy cup. There is extensive foliate-scroll hand engraving throughout the revolver. The left grip panel has Richard Petty’s signature carved into it and the right has a bust of Richard Petty carved into it.

Sights / Optics: The front sight is a quarter-round blade fixed to the front of the barrel and the rear sight is a square notch in the topstrap.

Stock Configuration & Condition: The grips are two-piece bone panels with silver-colored Colt medallions and the carving described above. The grips have no notable wear or damage, only light handling marks. There are no chips or cracks. The grips are slightly shy to the grip frame in some areas, but are generally well fit. Overall, the grips are in about Excellent condition. While the serial numbers written on the inside of the panels do not match the gun, given the limited production of this edition (100 made), it seems more likely that they were mixed-up when assembled than that they were replaced after the fact.

Overall Condition: This pistol retains about 95% of its metal finish. The balance is mostly in minor tarnish, most notable in protected areas such as the inside of the frame where the cylinder conceals it, inside grip frame screw holes and in front of the ejector rod housing. Most of this should easily clean up should you choose to. Otherise, there are only light handling marks. The screw heads are sharp. The markings are clear. Overall, this revolver is in about Fine condition and should clean up to Excellent.

Mechanics: We did not test the action so as to preserve the finish. There is nothing to indicate that this pistol will not function properly should you choose to fire it. We did not fire this pistol.

Box, Paperwork & Accessories: This pistol comes in a faux-leather wrapped wood french-fit presentation case with blue velvet interior, lidded accessory compartment, 6-round ammo block and locking latch (no key is included). The exterior of the lid has “King Richard” in gold leaf, the inside of the lid has a red, white and blue ribbon marked “King Richard” in gold and the inside of the tray has an in-set brass plate marked “Richard Petty / King Richard Edition / Single Action Army .45 Colt / United States Historical Society”. The exterior of the case has light storage wear with a few very small tears in the faux-leather covering and very minor wear from the contents on the interior, in about Very Good-plus condition.

Our Assessment: One of only 100 commissioned by the United States Historical Society, this Colt Single Action Army has been hand-engraved and silver-plated then paired with a nice french-fit display case to commemorate “King Richard” Petty, who is tied for the most NASCAR Cup Series titles at seven, and stands head and shoulders above the field in NASCAR Cup Series wins at an astonishing 200! He also still holds records for most wins in a season, most consecutive wins and most starts, despite his last win being more than 35 years ago. What better commemorative for “King Richard” than a custom engraved Colt Single Action Army? This would make a fine addition to any collection, especially for a NASCAR fan. Please take a look at our photos and good luck!