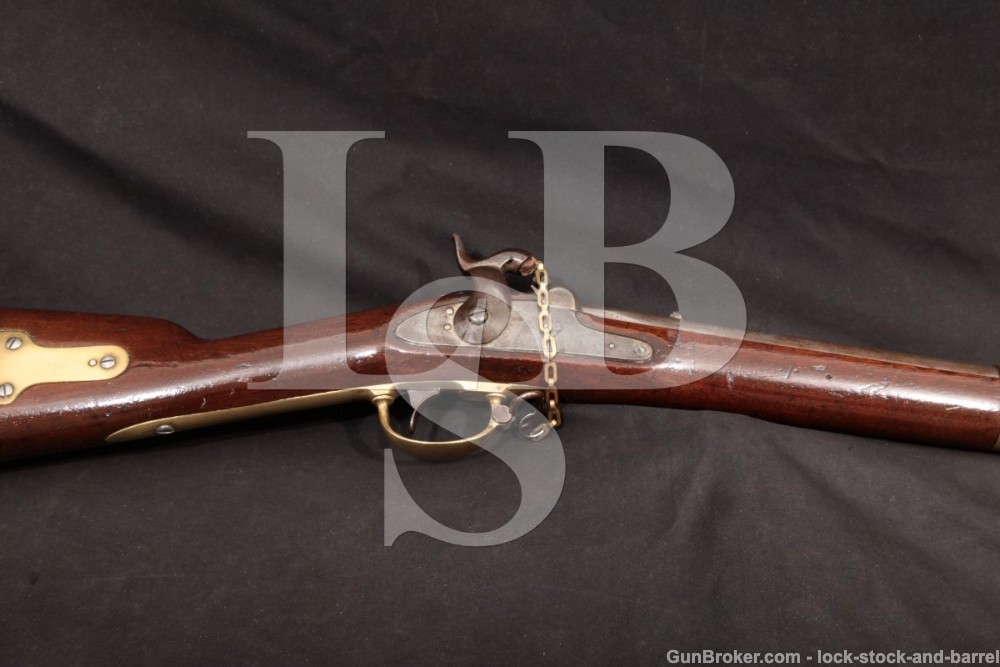 Stock Configuration & Condition: The stock is a one piece smooth walnut with a lacquered finish, straight grip and a flat brass buttplate. The forend runs to within 5” of the muzzle and has a double banded brass nosecap with a single barrel band further to the rear. There is a sling swivel mounted to the bottom of the nosecap and it has a hole in its front face for storage of a ramrod. The bottom of the forend is grooved for the rod up to the front edge of the barrel band. There is another sling swivel mounted at the front of the trigger guard and a brass patchbox inlet into the right rear of the stock. The metal is proud of the wood at the back of the upper tang and slightly proud of the wood in the lower tang just behind the trigger guard. There is oil staining at the butt, at the front of the comb, along the left side of the wrist and in old bruises and dings. There is a shallow gouge through the finish and a deep drag line at the front of the lockplate. There are multiple dings and bruises and several drag lines scattered over the stock with several small dings in the edges of the ramrod groove. There are no cracks or chips noted. The LOP measures 135/8” from the front of the trigger to the back of the buttplate. The buttplate has developed a mustard colored patina and shows multiple dings and a few bruises. The buttplate rates in about Very Good condition. The stock rates in about Very Good condition.

Type of Finish: The barrel was browened, the lockplate and upper tang case colored and the trigger guard, barrel band, nosecap and patchbox are all brass.

Finish Originality: There are no indications that the metal surfaces were ever refinished.

Bore Condition: The bore is gray with shallow rifling. There are a few spots of light erosion near the muzzle, but we couldn’t see clearly further into the bore.

Overall Condition: This rifle retains about 15% of its metal finish. There are dark spots of light erosion near the muzzle with light scrape marks where a socket bayonet was once attached. There are a few spots of light erosion in the lockplate and in and around the nipple bolster. The lockplate and upper tang show light surface frosting and the hammer has developed a dark plum colored patina while the barrel shows finish loss with a light plum colored patina developing. There are a few tiny dings and small scratches in the barrel with tiny dings and tool marks in the rear side flats, and a few dings in the hammer. There are tiny dings and scratches scattered over the trigger guard and its tangs, the nosecap and the patchbox. There are spots of discoloration from tarnish in the brass, but most is bright. The upper tang screw is disfigured and the two stock screws on the left side are slightly distressed. The markings are clear except for the address on the lockplate which is very thin from wear. Overall, this rifle rates in about Very Good condition.

Mechanics: The action functions correctly. The hammer has a half-cock position. We did not fire this rifle. As with all used firearms, a thorough cleaning may be necessary to meet your maintenance requirements.

Box, Paperwork & Accessories: This rifle comes with a leather nipple protected mounted to the trigger guard swivel via a chain, two ball pullers, a combination nipple wrench/screwdriver tool and a ramrod. Please see our photos for more detail. The ramrod is steel with a tulip shaped concave tip for starting a ball. The other end is threaded. The rod shows a plum colored patina forming in the front section with a few dings and dark spots of light erosion. The remainder of the rod shows light scratches and a few tiny dings. The ramrod is in about Very Good condition.

Our Assessment: This is a Model 1841 U.S. Percussion Rifle made by E. Remington in 1850. It is one of 10000 Model 1841 rifles made by Remington between 1850 and 1854 when he was still in Herkimer, NY. It features a 33” barrel in .54 Caliber, brass trimmings, a ramrod stored under the barrel, and comes with two bullet pullers and a combination nipple wrench/screwdriver tool. The rifle is in about Very Good condition. The bore is gray with shallow rifling and a few spots of light erosion near the muzzle. The Model 1841 rifle was often referred to as The Mississippi Rifle, and got its name because of its successful use by a Mississippi regiment under Jefferson Davis in the Mexican War (1846-1848). This model rifle is regarded by collectors as one of the most handsome all U.S. military percussion longarms. This rifle is destined for a collection of U.S. military arms.