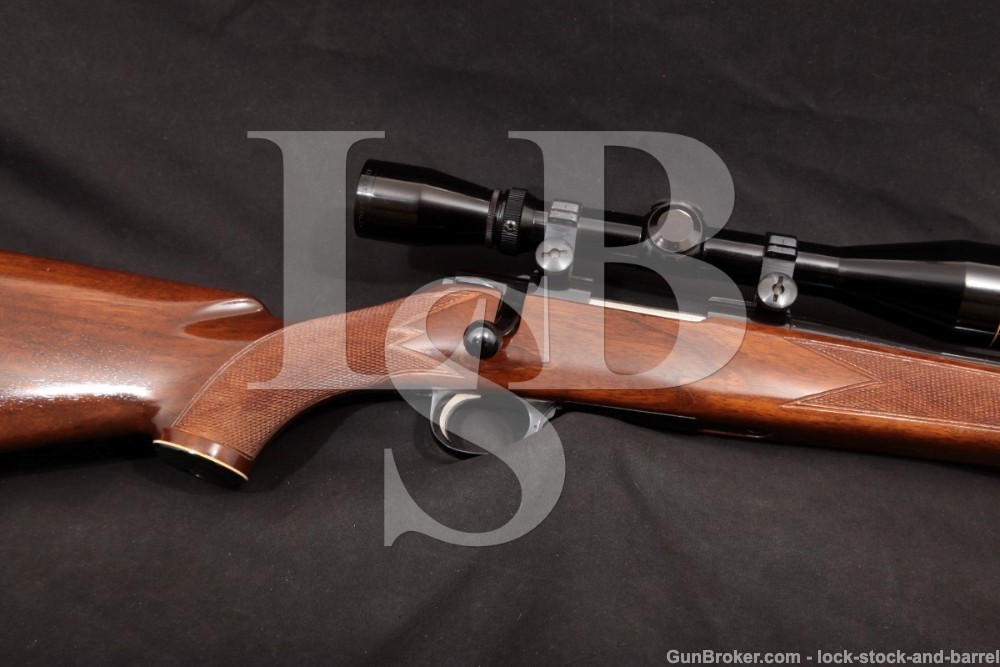 Year of Manufacture: Circa 1964

Barrel Length: The barrel is 23 ¾” in length and has a recessed target crown.

Sights / Optics: The front sight is a hooded post dovetailed into a checkered and ramped base fixed to the top of the barrel. There are no provisions for a rear sight. The top of the receiver has two flat checkered surfaces which are grooved for scope mounts, and there is a Leupold Vari-X II 3-9X variable power scope mounted. The reticle is a full duplex and the lenses are clear and free of distortion. There are a few light handling marks in the body of the scope and the power ring turns freely throughout its normal range. The scope is in about Excellent overall condition.

Stock Configuration & Condition: The stocks are checkered dark walnut with a high luster finish, Monte Carlo comb, cheek piece, black capped pistol grip with white spacer and serrated black plastic buttplate marked with a circled “SAKO” logo, also with white spacer. There are sling swivels mounted in the belly and the underside of the forend. There is a ding behind the cheekpiece on the left side, a few dings in the belly near the toe, a ding in the left side of the forend in front of the checkering, a ding through the finish in the upper right shoulder at the port, and two small dings in the underside of the forend, along with a few light handling marks scattered about. The checkering shows light wear without mars. The LOP measures 13 ?” from the front of the trigger to the back of the buttplate. The buttplate shows a few light marks, and the edges of the serrations are sharp. The buttplate is in about Excellent condition. The stock rates in about Fine Plus condition.

Bore Condition: The bore is bright with light wear in the rifling. There is no erosion in the bore.

Overall Condition: This rifle retains about 99% of its metal finish. There are a very few very light handling marks scattered over the barrel, a tiny mark in the bolt knob and thinning at the base of the bolt where it rotates into the receiver on opening. The knurling on the bolt knob and the serrations on the bolt release and safety are sharp. The screw heads are sharp and the markings are clear. Overall, this rifle rates in about Excellent condition.

Mechanics: The action functions correctly. It has a safety on the right side of the receiver and a bolt release on the left side. We did not fire this rifle. As with all used firearms, a thorough cleaning may be necessary to meet your maintenance requirements.

Our Assessment: Sako first started making rifles with FN Mauser actions in 1946. They had prototyped the L42 Luodikko in 1942, chambered for the 7x33mm Sako cartridge, and renamed this short action the L46 when they brought it into production in 1946. It was eventually chambered in the .22 Hornet, .218 Bee and .222 Rem. When the updated L461 action was brought out, the model was named the Vixen. Sako finally settled on 3 different length actions that changed designations over the years. This rifle is a Vixen Sporter with a 23 ¾” barrel chambered in .222 Remingon. The receiver was made circa 1964, before Garcia started importing them in 1972, and the early rifles are prized for their quality and craftsmanship. There is a Leupold Vari-X II 3-9X variable power scope mounted on the receiver. The rifle is in about Excellent condition with about 99% of its metal finish remaining. The bore is bright, with light wear in the rifling and no erosion. The .222 Rem., or Triple Deuce, was introduced in 1950 and was the first .22 caliber commercial rimless cartridge made in the United States. It enjoys a reputation for inherent accuracy and is a popular varmint cartridge at short and medium ranges. Sako rifles are known for their out-of-the-box accuracy, and this one is probably no exception. With its nice bore it should be a tack-driver and make someone a very nice varmint rifle that should last for decades to come, although we wouldn’t be surprised to see the Sako collectors outbid the shooters.  It is certainly good looking with its high luster stock finish, so please see our photos and good luck in your bidding!