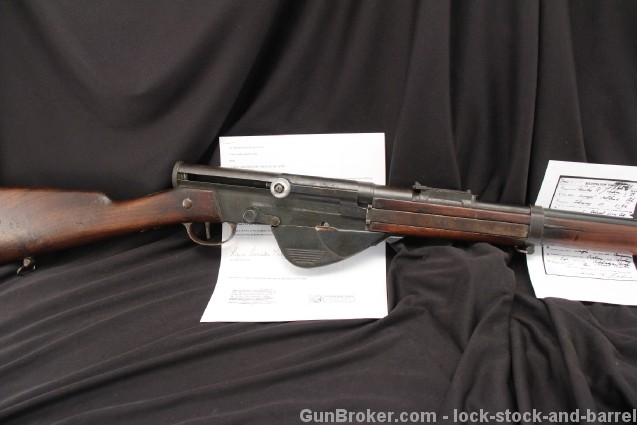 SOLD FOR: $4,913.88
Make: Manufacture d’ Armes de Tulle (Mat)
Model: Fusil Automatique Modele 1917
Serial Number: 17106
Year of Manufacture: 1917
Caliber: 8mmx50R Lebel
Action Type: Semi-Automatic with Hinged Floorplate Magazine
Markings: The charging handle, left side of the barrel chamber, and the plate just behind the magazine well are marked “F 17106”. The top of the chamber is marked “LP” and with a circled “J”. The right side of the barrel chamber is marked “MA T1917”, the rear part of the trigger guard with a circled “A”. The bottom of the forend in front of the magazine well and the left side of the buttstock are marked “F17106”. The right side of the buttstock has a cartouche marked “C.S. Juin 1917” between the outer and inner circles and “MA” inside the center circle. The top tang is marked “2”.
Barrel Length: 31”
Sights / Optics: The gun is mounted with a rear ladder sight marked from “9-24”. When the sight is folded down, there is a stepped 5 position base that forms an elevator sight, marked from “4-8”. The front sight is a wide blade.
Stock Configuration & Condition: The stocks are oiled hardwood and are a three part unit with a butt stock, and 2 piece forend. There are sling swivels installed on the butt and band around the two forends. The stocks show numerous marks and indentations, with one deep indentation on the top edge of the forward forend. There are no cracks or chips. The LOP measures 13 ¼” from the front of the trigger to the rear of the buttstock. The stocks rate in about Very Good overall condition.
Type of Finish: Blue
Finish Originality: All Original
Bore Condition: The bore is dark and the rifling is worn. There is some minor erosion.
Overall Condition: This rifle retains about 80% of its metal finish. The balance of the finish shows patina, frosting and pinprick surface erosion. There is also a long streak of bare metal (brass?) on the top left side of the magazine. The screw heads show distress, and have surface loss but are serviceable. The markings are clear. Overall, this gun rates in about Very Good condition.
Mechanics: The action of this rifle operates smoothly. We did not fire this rifle. It should be inspected by a gunsmith before firing.
Box, Paperwork & Accessories: There is some good provenance in the form of a certified letter from our consignor; stating that this rifle was brought back from WWI by their Great Uncle, Charles Fisher, who was a Sergeant Major in France during WWI, and that this rifle has been in his family ever since. Also included is a copy of Sgt. Fisher’s WWI Registration Card, dated June 5, 1917. A Wikipedia article is also included, which will provide more information about this model rifle and its service in World War I.
Our Assessment: The Fusil Automatique Modèle 1917 (also called the RSC M1917) was a semi-automatic, gas-operated, infantry rifle that was placed in service in the French Army during the latter part (1918) of World War I (the War To End All Wars.) It was chambered in the then-standard 8mm Lebel rimmed cartridge used in other French Army infantry weapons of the time. Altogether, eighty six thousand RSC M1917 rifles had been manufactured by MAT (Manufacture d’Armes de Tulle), when their production run ended in late November 1918, but very few have survived. This WWI “Bring Back” should be of considerable interest to collectors of WWI era weapons. Not only is it in Very Good condition with all matching numbers, but there is a certified letter detailing how this rifle was passed on through generations after its service in WWI