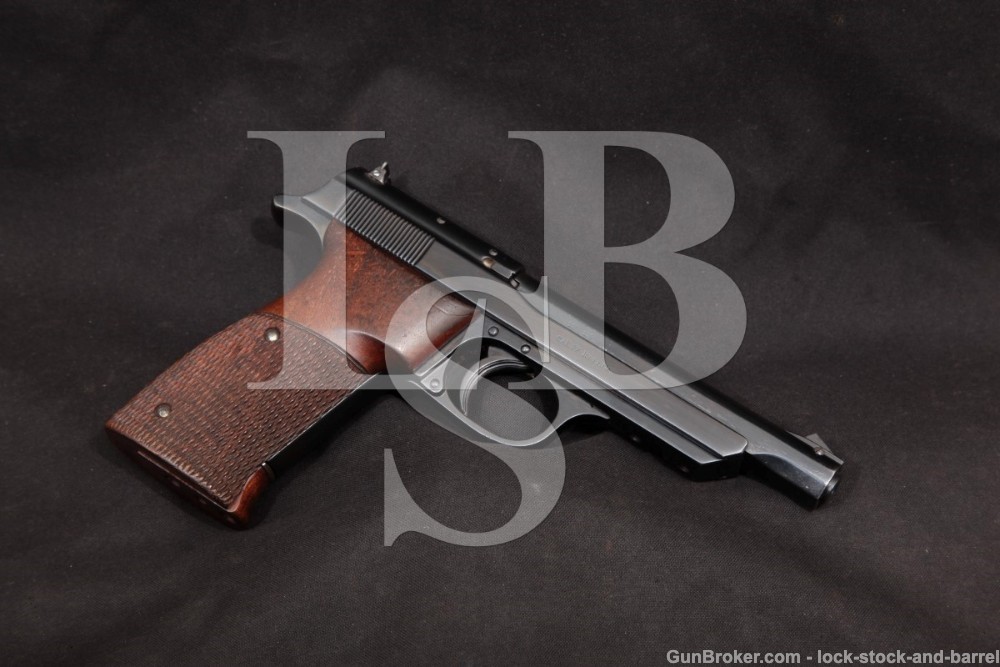 Sights / Optics: The front sight is Patridge style blade with a slightly ramped rear face that is held in a slotted base that has a rounded rear ramp. A set screw secures the blade in the slot. The rear sight is a flat-topped “U” notch that is dovetailed into the top of the slide and screw adjustable for windage. The top of the slide has fine wavy serrations to reduce glare.

Stock Configuration & Condition: The grip is a one piece checkered walnut that encloses the backstrap and extends about ?” below the bottom of the grip frame. The wood is dark with oil staining along its top edges and in the grooves of the thumbrest and backstrap checkering. There are several dings and a few drag lines in the smooth areas. The checkering shows light wear with a few tiny mars. The grips rate in about Very Good to Fine overall condition.

Finish Originality: The pistol has been professionally restored.

Overall Condition: This handgun retains about 98% of its current metal finish. There is light pitting under the finish in the barrel, at the left rear of the slide, in the right side of the trigger guard and in the right side of the frame below the slide. There is thinning in the front edges of the barrel and slide and a drag line under the safety. There are light scratches along the sides of the barrel and a tiny ding in the rear face of the slide, with a few light handling marks in the remainder. The screw heads are sharp. The proof marks are very shallow and the top of the “h” in Mehlis is missing. Overall, this handgun rates in about Fine condition as professionally refurbished.

Mechanics: The action functions correctly. There is a two position safety in the left side of the frame. The underside of the frame is grooved for the addition of weights. We did not fire this handgun. As with all used firearms, a thorough cleaning may be necessary to meet your maintenance requirements.

Our Assessment: This is a rare Walther Olympia Jagerschafts Pistole. The Olympia models were first made in 1932 expressly for use in the 1932 Olympics where it performed well. After slight modifications it was re-released in 1936. It won five Gold Medals in the 1936 Olympics, effectively ending the Olympic reign of the Colt Woodsman Target Pistol. This model was made in four variations, three for the Olympics and one for competing in the German Hunters Association matches. This pistol is the the German Hunter variation, and has a 4 ?” barrel with a checkered walnut grip having a slight thumbrest on the left side. The underside of the frame is grooved for addition of weights. This pistol is in about Fine condition as professionally refurbished with about 98% of its current finish remaining. The bore is bright with sharp rifling and no erosion. This version of the Olympia was only made for 3 years starting in 1938, but the Crown / N proof marks date the pistol to either 1938 or early 1939, making it even rarer. This pistol should be of great interest to collectors of target pistols and of German pistols in particular. We don’t think the shooters will be able to outbid the collectors on this one, but if they do, they will find themselves with a very well made target pistol that should easily last for another 80 years.