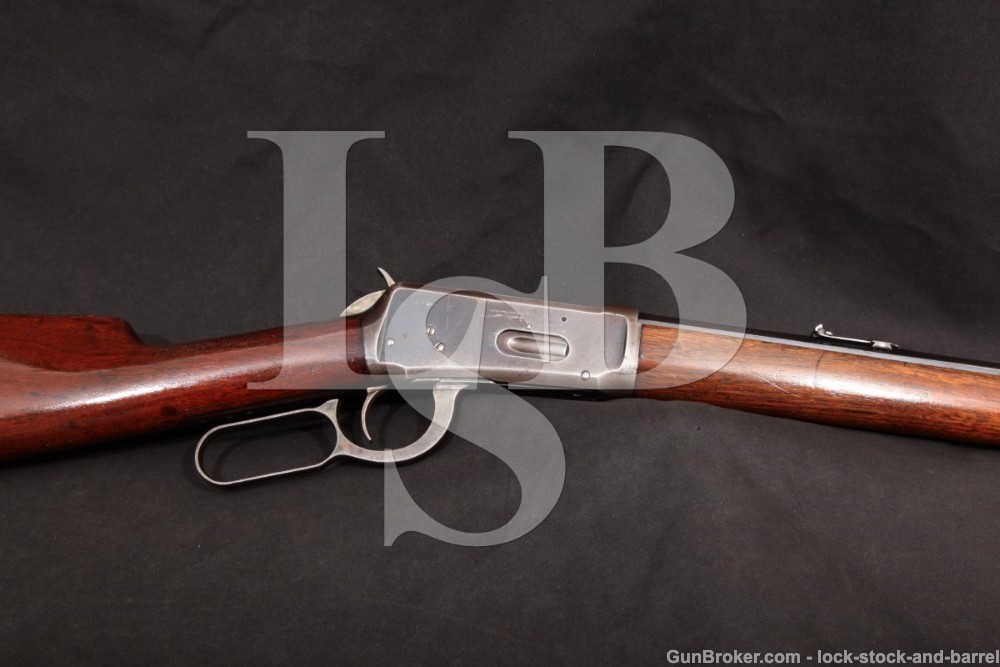 Markings: The top of the barrel is marked “MANUFACTURED BY THE WINCHESTER REPEATING ARMS CO. / NEW HAVEN, CONN. U.S.A. PATENTED AUGUST 21. 1894.” and at the receiver with “30 W.C.F.”, the left shoulder is marked “NICKEL STEEL BARREL / ESPECIALLY FOR SMOKELESS POWDER”. The underside of the receiver is marked “232796”. The top tang is marked “MODEL 1894 / -WINCHESTER- / TRADE MARK”.

Sights / Optics: The front sight is a brass blade integral to a steel base dovetailed and screw-set to the front of the barrel. The rear sight is a Winchester Express three-notch sight dovetailed to the rear of the barrel with two of the notches integral, the one folding down when the other folds up and a third, separate notch in front of these. The rear notch is marked “50”, the middle “1” and the front “2”, with the notches getting progressively taller toward the front. Each “V”-notch has a vertical line of platinum underneath as an aiming reference. The top tang is drilled, tapped, and filled for a peep sight (none included).

Stock Configuration & Condition: The stocks are 2-piece smooth walnut with a capped forend, straight grip, straight comb and blued steel crescent buttplate. The stocks have light-moderate handling wear with scattered light scratches, nicks and dings. The forend has a small but deep gouge on the bottom just forward of center and a few small chip-losses at the rear edge which appear to have been filled in the distant past with some of the fill since lost. The buttstock has a few lines at the rear of the top tang which appear as short, thin cracks, but we suspect they are merely grain-lines. The LOP measures 13″ from the front of the trigger to the back of the buttplate. The plate has worn to white with light wear and mottled discoloration from oxidation. Overall, the stocks are in about Very Good condition as likely refinished.

Bore Condition: The bore is gray with well defined rifling. There is light erosion scattered through the bore, darker in the grooves than the lands. Our gauge shows an ME of about 2.25.

Overall Condition: This rifle retains about 75% of its current metal finish. The finish is thinning at all edges. The barrel and magazine tube have generally strong finish with some scattered light nicks and scratches as well as infrequent spots of minor surface oxidation. The receiver has scattered light finish wear with strongest finish on the flats toward the rear and on the top toward each side of the bolt. The worn areas are developing a light patina. The receiver has scattered light nicks, scratches, and tool marks around some screw heads. The screw heads range from sharp to lightly disfigured with useable slots. The markings are clear. Overall, this rifle is in about Very Good condition.

Mechanics: The action functions correctly. The hammer has a half-cock safety. The rifle is equipped with a lever safety, which is operational. The lever locks up properly and the trigger is crisp. We did not fire this rifle. As with all used firearms, a thorough cleaning may be necessary to meet your maintenance standards.

Our Assessment: This is a Winchester Model 1894 Rifle made in 1901, just at the turn of the 20th century. It has a 26” octagonal barrel chambered in .30-30 Winchester. The cartridge is well known today as one of the most popular deer cartridges in America, mostly due to the Model 1894, and by 1901 it was just stepping into this role, having only been introduced in 1895. This example is in Very Good condition with about 75% of its blued finish remaining, a decent bore and strong mechanics. It also has a fairly rare Winchester Express rear sight. For the lucky winner, a letter from the Cody Firearms Records Office might show this as a factory-ordered feature, but either way it is a neat sight to find, especially with the platinum aiming reference lines which are an uncommon feature on this uncommon rear sight. This M1894 rifle is a nice find for Winchester collectors, and is a testament to the quality of these rifles to be in this condition after more than a century of use. Please see our photos and good luck!